Mission & History of the College of Liberal Arts 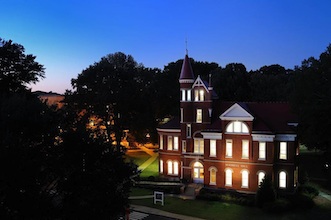 Visit the College of Liberal Arts in Ventress Hall.

The College of Liberal Arts constitutes the intellectual core of the University of Mississippi, providing the general education component for all of its undergraduate degree programs. Spanning the academic disciplines of the fine & performing arts, humanities, natural sciences & mathematics, and social sciences, the College extends the boundaries of scholarship in these disciplines. In an academic quest to understand our place in the world and to help shape society and the environment, the College strongly supports academic freedom and emphasizes critical and independent thinking, communication, ethics, integrity and citizenship with a global awareness of diverse human cultures. The faculty pursue important research and creative activities and foster graduate study, both vital to the university’s teaching mission and its academic growth, while participating actively in making its resources beneficial to the general public and molding the life of the institution.

History of the College of Liberal Arts

Founded in 1848, the College of Liberal Arts is the oldest and largest division of the University of Mississippi.

The College of Liberal Arts is coterminous with the University of Mississippi in the sense that the institution’s original disciplines and those later deriving and evolving from them essentially comprise the College today.

Over the years, the basic university departments had various appellations when referred to collectively—the “Department of Science, Literature, and the Arts” or the “Academic Department,” for example. Various “schools,” that is, academic disciplines, were housed within the department.

Not until the early 20th century was that unit given distinct administrative identity in the form of a dean, the first being Dr. Alfred Hume, who later served as chancellor of the university. A professor of mathematics, Hume was designated dean of the Department of Science, Literature, and the Arts in 1905. He was still serving as dean when the name “College of Liberal Arts” was adopted in 1916.

DEANS OF THE COLLEGE OF LIBERAL ARTS