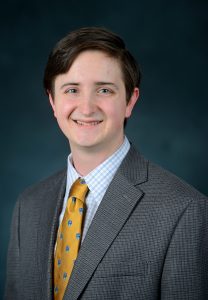 Just when Hunter Gabbard thought things couldn’t possibly get any better, they did.

The University of Mississippi physics student participated in an international team of scientists’ discovery of gravitational waves announced in February. Fresh on the heels of that surreal achievement, the Austin, Texas, native learned that he is the recipient of a Fulbright Scholarship to further study gravitational-wave astronomy at the Albert Einstein Institute in Hanover, Germany.

“I’m not quite sure ‘pure elation’ is adequate in describing how I felt once I read those first few words in the email, ‘Congratulations, you’re a Fulbright finalist!’” said Gabbard, who is the second UM student to be awarded the prestigious honor this academic year. Maggie Hall, an international studies and German major with a minor in mathematics, also received a Fulbright to Germany this spring.

Gabbard proposes to use a novel method-utilizing machine to better characterize and understand the non-astrophysical noise that can mimic gravitational-wave events in the Laser Interferometer Gravitational Wave detectors. He will be supervised by Andrew Lundgren, co-chair of the detector characterization group and part of the LIGO Scientific Collaboration.

“Ultimately, my goal is to do research and teach at the university level,” Gabbard said. “I would like to become an active researcher in gravitational physics, as well as take part in the design of next-generation detectors. This will become an important field, with much work to be done in both ground-based and later space-based observatories.”

Previously, Gabbard studied abroad in both the United Kingdom and France. A 2015 Goldwater Scholarship nominee, he is a member of the Sally McDonnell Barksdale Honors College, Omicron Delta Kappa and Sigma Pi Sigma honor societies, and Phi Eta Sigma fraternity. He is active in the Society of Physics Students, Beta Theta Phi fraternity, Phi Mu Epsilon, Alpha Delta Lambda and the Library Ambassadors.

Gabbard is most deserving of his Fulbright, UM administrators and professors agree.

“This award is a testament to Hunter’s excellent work in his brief scientific career,” said Marco Cavaglià, associate professor of physics and astronomy and LSC assistant spokesman. “He has been a full member of the LIGO Scientific Collaboration for several years and only one of a handful of undergraduate students earning authorship on the LIGO paper reporting the first direct detection of gravitational waves and all related companion papers. He can truly be taken as a model for student dedication and hard work by all his peers.”

“Hunter Gabbard represents what an SMB Honors student can accomplish at our great university,” he said. “His senior work in physics enabled him to co-author an extraordinary confirmation of Einstein’s theory, and he landed an amazing Fulbright. We are very proud of his determination, his imagination and resolve.”

Bruce Allen, professor and managing director of the Albert Einstein Institute, said Lundgren and other scientists there look forward to Gabbard’s arrival and research contributions.

“Mr. Gabbard has completed an impressive number of research projects in detector characterization, both during the regular academic year and through summer REU programs,” he said. “His proposed project at AEI will allow him to draw on this expertise while learning a new skill set of gravitational wave searches. This is a timely and important project and we’re excited to work with Mr. Gabbard on it.”

Gabbard said he shares the anticipation for working together with the world’s top physicists.

“Getting the opportunity to work at one of the leading institutions in the world for the study of gravitational physics (Max Planck Institute for Gravitational Physics), and to represent the U.S. abroad is both an honor and a privilege,” he said. “The Fulbright allows me the freedom to pursue my current research interests in machine-learning applied to the now burgeoning field of gravitational wave astronomy. Following my Fulbright year, I hope to continue my research at a Ph.D. program in either physics or astrophysics.”

Gabbard’s interest in physics began in high school, but before joining the UM LIGO group he had no idea how scientific research was conducted. After his first exposure to data analysis, Gabbard said he was hooked.

“With the LIGO group, I assisted in improving the quality of gravitational-wave detection systems by developing and testing new techniques to classify transients, such as isolating outside disturbances from collected data,” Gabbard said. “Additionally, I developed the ‘Terramon’ monitor, which is used at the LIGO and Virgo control rooms to help predict the effects of seismic events at the LIGO sites.”

During 2014, Gabbard participated in a National Science Foundation IREU program in gravitational physics through the University of Florida. He presented his work at the American Physical Society April Conference a year ago before spending last summer conducting research at the University of Texas at Rio Grande Valley.

“Through these experiences, I learned what it takes to work in an international collaboration,” Gabbard said. “I’ve learned how to better adapt to new research environments and what it truly means to be a scientist. I want to be a research mentor and inspire many of our future science leaders as I have been inspired by previous mentors of my own.”

The son of Lisa and Kurt Gabbard of Doylestown, Pennsylvania, Gabbard is the university’s 16th Fulbright U.S. Student Award winner since 2000.

Students interested in applying for the Fulbright U.S. Student Award are encouraged to contact the Office of National Scholarship Advisement at onsa@olemiss.edu.