Scheduled to teach English in Germany next year 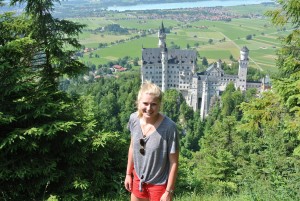 Maggie Hall has already visited Germany twice, but that hasn’t kept the University of Mississippi senior from being thrilled about returning there. Soon, the Greenwood native will get her wish as a 2016 Fulbright U.S. Student Award winner.

An international studies and German major with a minor in mathematics, Hall has been granted a Fulbright English Teaching Assistantship. She’s not certain exactly which city she will assigned, but she will work with a teacher there, helping her or /him teach elementary-, middle- or high school-age students in English classes.

“I was in the Kroger self-checkout when I happened to check my Gmail account,” Hall said. “I first saw the subject line of the email, got very nervous, and then dropped my phone into the basket when I saw the word ‘Congratulations!’

“After a couple minutes, I mostly just felt relief. I was thrilled, but relieved to know that the wait from October to now was finally over and the outcome was the best possible one.”

A member of the Sally McDonnell Barksdale Honors College and the Croft Institute for International Studies, Hall studied abroad in Potsdam, Germany, during her junior year, and in Jenna, Germany, in summer 2013.

Recently, she was awarded a Taylor Medal, the university’s highest academic award. Hall was also recognized as a Who’s Who Among American Colleges and Universities earlier this semester.

She is a member of Phi Beta Kappa and Phi Kappa Phi, as well as Phi Sigma Iota Honor Society, Order of Omega, Delta Phi Alpha and the National Society of Collegiate Scholars. Hall is president of the Ole Miss German Club.

“I have also been very involved in RebelTHON, the dance marathon organization that raises money for Blair E. Batson Children’s Hospital in Jackson,” Hall said. “I was on the founding board of RebelTHON my freshman year and have served as director of sponsorships, co-director of fundraising and chair of remembrance.”

A member of Delta Gamma sorority, she has played on many intramural teams in indoor-outdoor soccer, flag football and softball. Hall has been involved with Freshman Council, the Green Grove Initiative and Lambda Sigma Honors Society, all of which allowed her to be involved with community service projects such as Habitat for Humanity.

After graduation, Hall plans spend a year in Germany through the Fulbright ETA Award.

“Later, I hope to get either my M.A. in German or my MBA,” she said. “Having the experience of the Fulbright ETA program will enable me to further improve my German language skills while also learning more about the German culture.”

“As an undergraduate student in our international studies program, Maggie Hall has demonstrated a high level of talent, creativity and dedication,” said Margaret Ross Long, Croft Institute admissions coordinator. “She’s been a model for our program and is enormously deserving of this distinguished honor.”

Kees Gispen, executive director of the Croft Institute, said it’s been a pleasure for him to teach and know Hall.

“Maggie Hall has been exemplary and I am confident she will succeed in life as she has in college,” he said. “She is focused, hardworking, talented and versatile. She has won pretty much all the academic honors the university awards.”

“We are very proud of Maggie’s accomplishments as both scholar and citizen at UM,” said Douglass Sullivan-Gonzalez, dean of the Honors College. “Capturing a Fulbright is a dream come true, and we could not be more elated for Maggie. We know that she will continue to reflect the high ideals of the SMB Honors College, Croft and our great university as she travels abroad for the coming year.”

Hall is the university’s 15th Fulbright U.S. Student Award winner since 2000. Joseph Nicholas Troisi and Colby Woods won Fulbrights to Turket and Germany, respectively, in spring 2015. In 2014, Michael Shea and Katie Shuford were awarded Fulbrights to Argentina and Hungary, respectively.

Her parents are Dr. Todd and Stacey Hall of Greenwood.

Students interested in applying for the Fulbright U.S. Student Award are encouraged to contact the Office of National Scholarship Advisement at onsa@olemiss.edu.