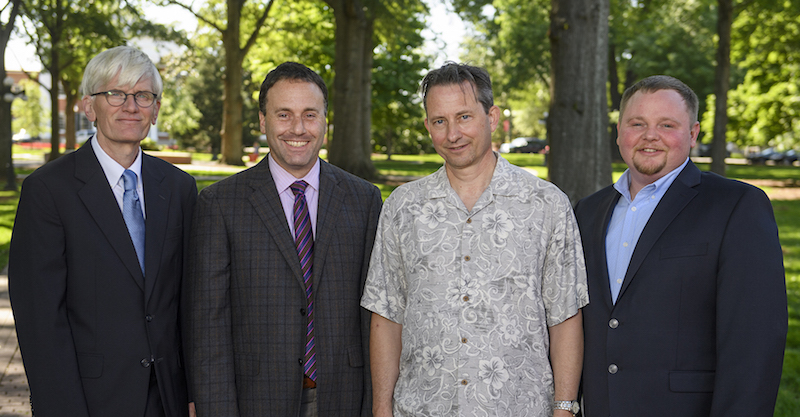 The University of Mississippi College of Liberal Arts recognized three faculty members Friday (May 13) for their outstanding work in educating students.

“The College of Liberal Arts has a strong commitment to excellence in teaching,” said Lee M. Cohen, dean of liberal arts. “As such, it is an honor and a privilege to recognize Mr. Brinlee, Dr. Buskes and Dr. Murray as this year’s award recipients. I am certain that our students appreciate these outstanding educators.”

Brinlee was awarded the Cora Lee Graham Award because of his commitment to excellence in freshman education, intellectual stimulation of students and concern for students’ welfare. Brinlee earned his bachelor’s and master’s degrees in fine arts at the Memphis College of Art. He arrived at UM in 2012 as an adjunct professor and in 2014 accepted the position of assistant professor and foundations coordinator.

Brinlee said he is humbled and honored to receive this award.

“This award of recognition was totally unexpected,” he said. “To be given the opportunity to teach students how art enriches and informs their daily lives is an award all by itself. The students are the reason I chose to be an arts educator, and why I will always commit myself to helping them achieve their educational goals.

“Every year I see my former freshmen students graduating and moving on with their lives. My hope is that one day they will look back on their college experience and know that there was a teacher that cared, encouraged, challenged and supported them.”

“He has made a terrific and excellent difference in our department in a short time,” Sheri Reith, associate professor of art and art history, said in a letter of nomination. “The students he is teaching are attentive and interested in the information he is giving. Josh teaches hands-on problems and calls on his students to produce written work as well.

“At the end of his classes, I see his students talking with him, and he is smiling and so are they. He cares for them.”

Buskes has been at UM since 1985, after receiving advanced degrees in mathematics from Radboud University in the Netherlands. He received the Outstanding Teacher of the Year award for his excellence in teaching and dedication to his students.

“He truly cares about his students understanding the material in his class, a trait which unfortunately is a rare find in mathematics,” UM student Maegan Easley said in a nomination letter. “His 50-minute lectures often seem like 10 minutes because he makes his class so fun and engaging! He creates a rapport with his students that is unique in the mathematics department.”

“To ensure a seamless transition between our classes, we have sat in each other’s lectures many times, which has allowed me to observe the impact that Dr. Buskes has over his students,” Gonzalez said in a letter of nomination. “By example and by mentorship, my experience with Dr. Buskes has also shaped the way that I try to teach my own classes, and the way that I develop a relationship with students.”

However, Buskes said other faculty members continue to inspire him as well.

“I am so honored by this award and the affirming statements of my colleagues and students,” Buskes said. “I certainly had teachers who inspired and guided me, and to be seen in that light is such a thrill.”

“I am delighted to accept the award as Outstanding Instructor of the Year,” Murray said. “In all of my classes, I encourage students to engage personally and collectively with complex ideas and difficult problems, which I hope prepares them to become informed and involved global citizens.”

Kirsten Dellinger, professor and chair of sociology and anthropology, nominated Murray for the award based on his method of teaching and care for students.

“Dr. Murray’s student evaluations and peer observations have consistently ranked him as an excellent or superior teacher,” Dellinger said in a nomination letter.

“The sheer number of written comments for all courses indicates an enthusiasm and engagement in Matthew’s courses rarely seen when reviewing faculty who have been nominated for teaching awards.”

Dellinger said Murray encourages students to “learn by doing” and gives students the resources they need to do that.

“We are fortunate to have such a well-rounded, research-active faculty member in the department introducing students to anthropology and geography as well as providing advanced training for students who will move on in the field of archaeology,” she said. “I am thrilled that he has received this well-deserved honor.”

All three recipients were recognized at the spring faculty meeting and will be honored Saturday during the college’s commencement ceremonies. Each received a commemorative plaque and $1,000.