Scholarship will Support Students of German in College of Liberal Arts 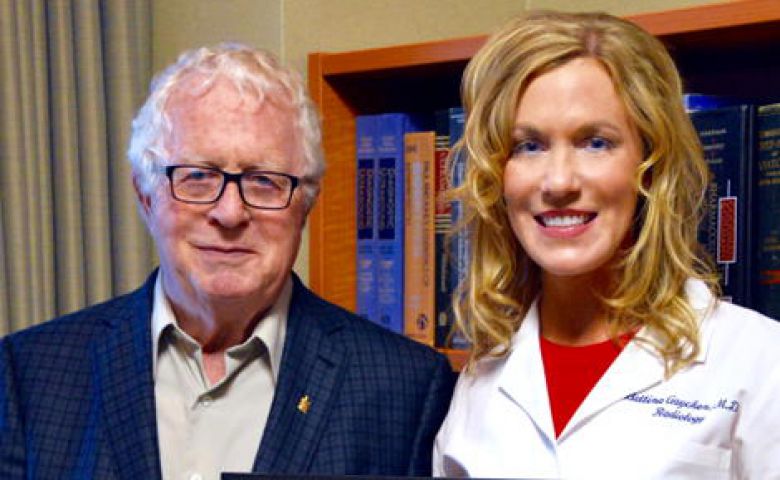 After four years of medical school, a year as an intern, four years of radiology residency, a year of fellowship training and a few years as a practicing radiologist, Bettina Gaycken’s dream of honoring her father has come true.

Ever since she was a University of Mississippi student in the late 1990s, Dr. Gaycken, now a radiologist with Women’s Health Center in Memphis, Tennessee, has wanted to present her father with a gift that would forever associate his name with her alma mater. After all, Ole Miss is the place where Dr. Hans-Jürgen Gaycken taught German for 35 years in the Department of Modern Languages.

At his 82nd birthday party, Bettina Gaycken gave her father a certificate, indicating she had worked with the UM Foundation to establish an endowment that would fund a scholarship in his name and would be awarded each year to students of the German language.

“That was a big surprise,” Hans Gaycken said. “I was really touched when she did this and thought it was very nice. I’m very pleased to know that it will help students.”

Bettina Gaycken practically grew up on the Oxford campus, playing school on the chalkboards in Bondurant Hall, where her father’s office was located. Years later, she herself would sit in those classrooms as a German major and admire her father from a different perspective: as her professor.

“It was then that I understood why so many of his students respected and adored him. His teaching style was relaxed and often humorous which made class enjoyable. He was always available to his students, whether it was to continue an interesting discussion from class or to offer advice on problems completely unrelated to academics,” she said. “It was no surprise to me that many of his former students sent thoughtful cards and some even flew in from different states to attend his 80th birthday party.”

Bettina Gaycken also majored in biology and graduated from UM in 2000. She earned her medical doctorate in 2004 from the University of Tennessee and completed her radiology residency at Baptist Memorial Hospital in Memphis followed by a fellowship in Breast Imaging at Brigham & Women’s Hospital/Harvard Medical School in Boston.

Gaycken says she hopes her gift will both celebrate her father’s tenure at the university and encourage more students to pursue a degree in German.

Donald Dyer, UM chair and professor of modern languages, confirms that students majoring in German as undergraduates will have an opportunity to secure funding from the Gaycken Scholarship, which will support their studies.

“The Department of Modern Languages is very appreciative of the Gaycken Award and the family who has made this possible,” Dyer said. “Dr. Gaycken was a well-respected member of the faculty who was loved by his students. In addition to teaching, he was known for his mentoring of students and the development of study abroad programs in Germany.”

College of Liberal Arts Dean Lee M. Cohen echoed Dyer’s sentiments: “The scholarship established by Dr. Gaycken will perpetuate her father’s name for generations to come, while also helping to improve the college experience for the students that her father cared so deeply about. We are very grateful to Bettina Gaycken and hope her generosity will inspire others to make similar gifts to the university.”

Hans Gaycken, a native German, came to the United States in 1957 and worked as an intern in a California import/export honey company. He returned to Germany for a few years before beginning his higher education at the University of California in 1963. He ultimately received a doctorate in German languages and literature from the University of Tennessee in Knoxville, where he met Hanne, also a German native, who would become his wife. In 1973, Gaycken joined the faculty at Ole Miss.

During his tenure, Gaycken’s achievements included:

Additionally, for more than 10 years, he took students of German to the summer program at the University of Jena, where immersion into German culture helped hone their skill levels.

The Dr. Hans-Jürgen Gaycken German Studies Excellence Endowment is open to gifts from individuals and organizations. To contribute, send checks with the endowment name noted in the memo line to the University of Mississippi Foundation, 406 University Ave., University, Miss. 38655; or visit www.umfoundation.com/makeagift. For more information contact Denson Hollis at dhollis@olemiss.edu or 662-916-5092.