Their faint beams made lighthouses largely useless until the 1819 invention of a lens that vastly improved safety for sailors near shore. 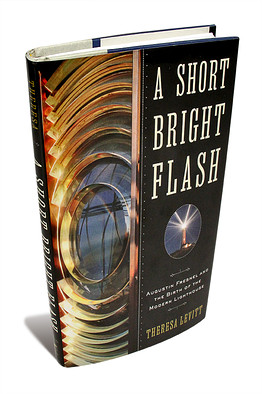 To maintain infrastructure and promote commerce, modern nations have always depended on rigorously trained engineers. The first formal school of civil (as opposed to military) engineering anywhere was France’s École nationale des ponts et chaussées, established in 1747, which focused on bridges and roads. In the early 19th century, students typically entered this postgraduate school after leaving the École polytechnique, whose scientific and technical curriculum served as a model for West Point.

It was into this Parisian academic culture that the subject of Theresa Levitt’s captivating “A Short Bright Flash: Augustin Fresnel and the Birth of the Modern Lighthouse,” was inserted at the young age of 16. Born in Normandy in 1788, Fresnel, like a lot of engineers-to-be, had already demonstrated an affinity for science and mathematics. But he was drawn to solving practical problems as much as to their theoretical underpinnings, and there were plenty of problems to solve in France, whose infrastructure had been neglected during the Revolution.

Fresnel’s first job after his 1809 graduation from “les Ponts” was overseeing road building in a remote area, which left him intellectually isolated. In his spare time he would “speculate on philosophical matters,” and he soon became interested in the physics of light, a subject that at the time was dominated by Newton’s particulate theory. But the concept of a light beam composed of particles appeared incompatible with the phenomenon of diffraction, in which light passing through a narrow slit spreads out in a pattern of alternating light and dark bands, rather than the even glow one would expect. Fresnel explained the phenomenon by imagining light as a wave, but this unorthodox view put him at odds with the old guard. His persistence and his brilliant analysis and demonstration, however, won him the Grand Prize from the Académie des sciences in an 1819 competition. This naturally put Fresnel in a different class, and he sought opportunities to solve problems more challenging than building roads.

A problem as challenging practically as diffraction was theoretically was the safety of ships as they neared land, with all its dangerous rocks, ledges, shoals and shallows. Lighthouses had existed from ancient times, but they remained few and largely ineffective. The consequences of this deficiency were captured by the Romantic painter Théodore Géricault, whose greater-than-life-size “The Raft of the Medusa” was the talk of Paris in 1819. The raft had been constructed to supplement lifeboats as the naval frigate La Méduse was sinking after it ran aground four miles from the coast of Mauritania, which lacked an adequate warning light. The raft and the 147 people aboard it were at the mercy of sea currents. After two weeks, during which some of the castaways resorted to cannibalism, only 15 survived.

Fresnel turned his mind to lighthouses, and especially the lights within them. The source of illumination had progressed from a simple fire to candles, oil and gas, but the visibility of the light remained limited, even with reflecting devices to concentrate the beam. Fresnel’s idea was to use carefully crafted lenses to focus the light. He soon realized, however, that a sufficiently thick lens would dim the light and limit the light’s range significantly. Using his knowledge of optics and his ingenuity, he designed in 1819 a relatively thin lens with a stepped profile that acted like a collection of prisms to direct a great deal of the light from its source into a strong parallel beam. The Fresnel lens was so far superior to pre-existing technology that it provided an opportunity for France to outshine its rival Britain in engineering achievement. 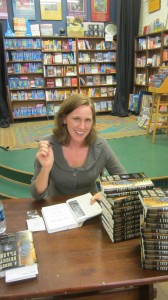 Theresa Levitt at a book signing.

The first Fresnel-equipped lighthouse was at Cordouan, on the western coast of France, an elegant construction that dated from the 17th century. With the new lens in place, a lookout atop a ship’s mast could see the light from more than 30 nautical miles away. The success of the Cordouan light would enable France to go in half a century from having about 20 lighthouses to having enough lights along its coasts so that no ship was ever out of sight of one. Furthermore, with each light beam rotating at a characteristic frequency, a ship could tell exactly where along the coast it was. But even as his lighthouse lens was beginning to flourish, Fresnel took ill and died, at the age of 39.

This all happens well before the halfway point in Ms. Levitt’s book. The rest of “A Short Bright Flash” recounts how the lens came to be adopted around the world. The story of how the lens came to America is an especially engaging chapter, with Ms. Levitt’s description of the young nation’s aversion to science and a scientific approach to engineering. The construction and maintenance of lighthouses was approached not rationally but with ignorance, stubbornness and cronyism. For about three decades, U.S. lighthouses were under the control of Stephen Pleasonton, the bean-counting official accountant of the State Department, who stubbornly resisted modernization and thereby hampered commerce and endangered lives.

It wasn’t until the administration of James K. Polk, she writes, when “the prominence given to scientists and engineers” in France began to be appreciated in Washington and “the opinions of men of science were taken seriously by policymakers in matters of industry,” that saner minds prevailed and Fresnel lenses began to be employed in American lighthouses. By 1856, the U.S. was using more Fresnel lenses than any other seafaring nation in the world. Many of these installations, she notes, would a few years later become the object of sabotage by Confederate forces trying to thwart the Union blockade of Southern ports.

Ms. Levitt recounts all this in fine prose, combining matters of biography, science, engineering, technology, art, history, economics and politics seemingly effortlessly and definitely seamlessly. “A Short Bright Flash” is an excellent book and a joy to read.

Mr. Petroski is a professor of civil engineering and of history at Duke University. His latest book is “To Forgive Design: Understanding Failure.”

A version of this article appeared September 23, 2013, on page A15 in the U.S. edition of The Wall Street Journal, with the headline: Crafting an Rx For Shipwrecks.