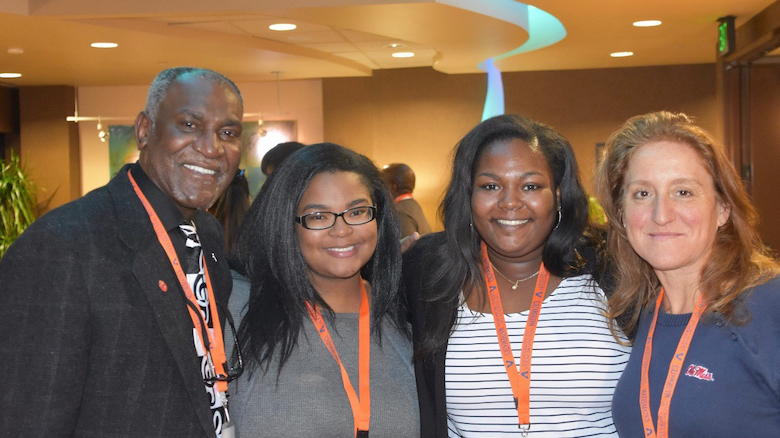 Before Victoria Robinson became a student at the University of Mississippi, no one in her family had ever furthered their education beyond a bachelor’s degree. The idea of going to graduate school and pursuing a terminal degree wasn’t even on her radar.

Fortunately for Robinson, among the University of Mississippi community are many caring faculty who go above and beyond to make sure each student is provided the resources and relationships to help them accomplish anything. For the Beaumont native, Donald Cole was that person.

The recently retired mathematics professor and special assistant to the chancellor recognized Robinson’s potential and informed her about the Ronald E. McNair Post-Baccalaureate Achievement Program, which helps high-achieving students from disadvantaged backgrounds and empowers them to pursue doctoral studies.

“I was hesitant at the thought of applying, but the McNair program alleviated most of that stress,” said Robinson, who completed her mathematics degree at UM and is a doctoral student at the University of Alabama. “After talking to several of my classmates who did not participate in the McNair program, I soon realized how much they (McNair) had prepared me and how I could not have succeeded without them.”

By being involved in research and other scholarly activities, 44 McNair Scholars have already attained either their Ph.D. or Ed.D. Thirty-five others are working on doctoral degrees.

Skylynn Irby, another UM mathematics alumna, had never attended scholarly conferences before becoming a McNair Scholar. She is enrolled in the same program as Robinson at Alabama.

“With support from the McNair program, I attended conferences to present my research, and this allowed me to improve my presentation skills and ability to communicate technical material,” the Batesville native said. “I also received many opportunities to participate in conference networking events and visit several schools before deciding on a graduate program.

“Lastly, I received the opportunity to give back by connecting with other students and encouraging them to apply for McNair.”

Another UM McNair Scholar seeking her advanced degree is Stephanie Poiroux, of Pascagoula. The graduate, who is pursuing the master’s degree in sociology at UM, said she felt welcomed into the program that invested in her fulfilling her potential.

“Before I became a McNair Scholar, I had no idea how I was going to be able to attend graduate school, nor the steps I needed to take in order to get there,” Poiroux said. “Along with providing me with research and presentation opportunities, the McNair Program also provided resources and information to help me apply and prepare for graduate school, such as advice on how to talk to and connect with professors and GRE preparatory classes.”

Irby, Poiroux and Robinson are all great students achieving great things, but that is exactly what the program’s administrator wants to see on a campus that strives to recognize need and emphasizes the value of personal connections.

“The McNair Scholars program is a high-achievers program that has met or exceeded its goals and objectives for the past 24 years,” said Demetria Hereford, program director. “What is happening this year is what we think should happen every year.

“Although I am extremely proud of our scholars, I see this as normal phenomena – what we are supposed to do.”

The McNair program could set a new record for the highest percentage of bachelor’s degree recipients being enrolled in a post-baccalaureate program by the fall term of the academic year immediately following the completion of the degree.

Nine McNair scholars graduated from UM, Rust College, Tougaloo College, Mississippi Valley State University and Alcorn State University in May. Eight of those nine students were slated to begin graduate school in August. At 88 percent, this represents the highest percentage of McNair scholars to enroll directly in a graduate program to date, exceeding the 50 percent proposed in the grant.

Along that same trajectory, 86 percent of the McNair scholars have participated in scholarly activities and/or research, again exceeding the 62 percent proposed grant objective.

The U.S. Department of Education measures the program’s success via a yearly data report. While records won’t be official until December, preliminary figures indicate that the program will exceed the proposed grant percentages moreso than in the past.

As Cole and Hereford reached out to UM students and helped them make personal connections that led to lifelong relationships, many McNair alumni are employed as scientists and educators, trickling down and imparting their knowledge to others.

The McNair Scholars Program is a model program that other programs/efforts on campus with similar goals can learn a lot from, said Katrina Caldwell, vice chancellor for diversity and community engagement.

“Demetria and Dr. (Donald) Cole have built a ‘best practice’ program, because they have been dedicated to maintaining excellence in this program,” Caldwell said. “Even though the grant sets expectations for success, it has been their work that has guaranteed that our campus continues to not only reach this significant benchmark, but they have exceeded it.”

After his death in the Challenger explosion in January 1986, Congress provided funding for the Ronald E. McNair Post-Baccalaureate Achievement Program to encourage college students with backgrounds similar to McNair’s to enroll in graduate studies. This program is dedicated to the high standards of achievement inspired by his life.