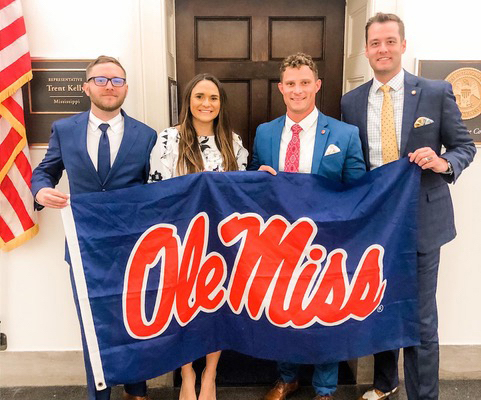 University of Mississippi student veterans Winston Taylor (left), Lauren Graham and Jamie King show off an Ole Miss flag with Andrew Newby, UM assistant director for veterans and military services, in front of U.S. Rep. Trent Kelly’s office In Washington, D.C. The flag was originally carried to Iraq by King when he was deployed there with the U.S. Army’s 82nd Airborne Division. Photo courtesy Lauren Graham

Three University of Mississippi student veterans recently joined Andrew Newby, assistant director for veterans and military services, in Washington, D.C., to meet with the nation’s leaders and participate in a joint hearing before the House of Representatives’ and Senate’s Veterans Affairs committees.

Newby was joined by student veterans Lauren Graham and Jamie King, and also by Winston Taylor, a public policy leadership major who was already in D.C. serving as an intern in the Senate Committee on Commerce, Science and Transportation.

Newby, Graham and King flew to D.C., where they met up with Taylor, on March 1. They spent a few days meeting with members of Congress and sightseeing in advance of the March 3 hearing.

Newby was invited because of his involvement in multiple 2020 policy initiatives he hopes to see enacted at a federal level, including updating the way the Department of Veterans Affairs classifies on-campus medical care providers and paying student veteran benefits during semester breaks.

“We want campus providers to count as community providers so students don’t have to travel to the VA center in Jackson for every treatment,” Newby said. “And we want to see student veterans paid between the breaks and semesters.

“If you’re not in class, you don’t get payment, but we don’t think that’s right because they still have to live in Oxford, LA, New York or whatever expensive college town.”

“The students got to interact with lawmakers and tell them why Ole Miss is succeeding, why they’re making impacts on campus and what they want to see for student veterans in the future,” Newby said.

King, a junior geology major from Cleveland who served as a paratrooper in the U.S. Army’s 82nd Airborne Division, said the trip opened his eyes to the possibility that he could use his influence to help the people he served with.

Sitting down with high-ranking elected officials and voicing his concerns about veterans benefits galvanized his passion to see other members of the 82nd Airborne succeed, he said.

“I was able to see the accessibility of these people who were involved in shaping my day-to-day in Iraq,” he said. “The university allowed me to go to D.C. and knock on these doors, and these people actually listened to what I had to say.”

Because the 82nd Airborne is so physically demanding, King said a lot of the soldiers wind up injured or end up leaving due to burnout from the up-tempo nature of the division. That means there are a lot of soldiers with limited options and a diminished opportunity for a continued career in the Army.

King wants to see each of those transitioning soldiers make full use of the G.I. Bill benefits so that they can be successful in their new career and next phase of life.

“Two years ago, my plan was to use my geology degree to walk around the woods and check maps for a government agency,” King said. “I don’t know if that’s the case anymore, now that this is on the table.

“I want to utilize my geology degree, but if I can make sure transitioning soldiers and incoming students are set up for success, that trumps the woods.”

Graham, a senior accounting major from Fischer, Texas who served as a nuclear electricians mate in the Navy, said she hoped to share ways the UM Student Veterans Association has seen successful with the national organization. She shared how SVAs can partner with other campus organizations to raise funds and also build report. She even helped some chapters qualify as 501(c)(3) nonprofit organizations.

“A lot of veterans organizations are reserved and not incorporated in the student lifestyles, so we wanted to show that it can be more,” Graham said. “We can integrate with the rest of campus to show how diverse veterans are.”

She said the experience, and the connections she made with U.S. Sen. Roger Wicker and U.S. Rep. Trent Kelly, made her realize that the small changes they’ve made on campus can really help people and that by sharing those changes they can do something to positively impact veterans around the nation.