VIDEO: UM Student Passes His Way to a $100K Scholarship 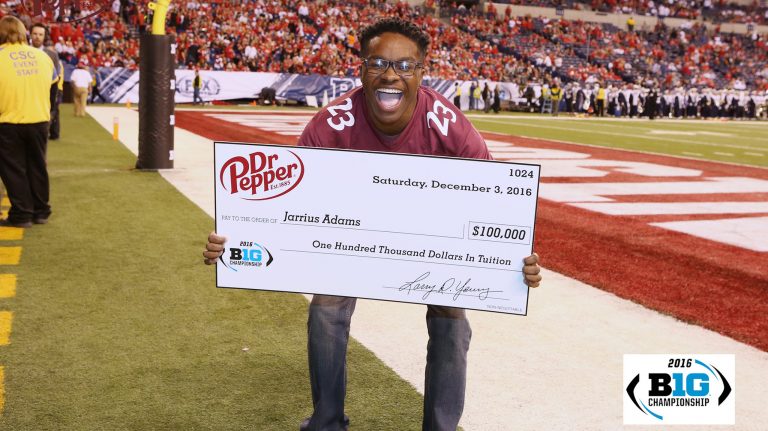 Throwing winning touchdown passes is always gratifying, but for Jarrius Adams on Saturday (Dec. 3), lobbing the football also proved to be very lucrative.

The University of Mississippi sophomore successfully threw 11 15-yard passes into a target to win the $100,000 Dr Pepper Tuition Giveaway scholarship. The 30-second throw-off against another finalist was televised live during halftime at the Wisconsin-Penn State Big 10 Conference championship.

The windfall is a welcome surprise for the Hattiesburg native, who is majoring in public policy leadership and political science.

“It’s a truly wonderful blessing,” the 19-year-old said Monday, still giddy from the prize-winning weekend. “I worked really hard to get to reach this level, but honestly, it’s hard to believe it really happened.”

Adams’ journey to the winner’s circle began in August, when he ran across an ad for the competition on his Facebook page.

“Years before, I’d watched another Ole Miss student I knew win second place in this same competition,” he said. “I told myself then I would one day enter it myself, but forgot about it until I saw the ad. That’s when I decided to enter the contest.”

The soft drink company contest invites students ages 18 to 24 to submit 350-word essays on how they would use their education to change the world. Social media users vote for the entries, and those whose entries receive a minimum of 50 votes each record 1-minute videos to gain even more votes.

“Tuition costs are rising year by year,” Adams said in his video. “The No. 1 financial crisis for this nation for years to come is college students’ debt. The nation must make a commitment to alleviate the pressure on millenials.

“Financial constraints create unbearable obstacles, but I thank Dr Pepper for disabling those barriers for so many students.

“I really wasn’t nervous, but being on live television in front of thousands of people was a bit distracting at first,” he said. “Once the whistle blew and I started actually throwing the balls, I focused on winning. Only after it was over and I was being presented the check did I realize that I’d won. It felt so good!”

Since his winning moment, Adams has received hundreds of thousands of congratulations via his social media, emails, texts and phone calls. UM Chancellor Jeffery S. Vitter was among those who praised him for his winnings.

“I am so thrilled for Jarrius,” Vitter said. “He is such a deserving student who will use his college education to achieve great things and change lives. This prize money will certainly go a long way toward helping him reach his goals.”

A UM orientation leader, Adams is the son of Taquanna and Yahmani Adams of Hattiesburg. His siblings include a brother and a sister.

“To not have to worry about college tuition anymore is such a huge blessing for me,” he said. “I really hope that my good fortune inspires others to seek such opportunities in the future.”

He shared his short- and long-term goals for his unexpected funds.

“There are two issues that I hold dear to my heart: education and voter registration,” Adams said. “With my degree, I will work to rebuild the current educational system to ensure that all students have access to a free and adequate public education. I will continue to be an advocate for voter registration, making sure that it is more feasible for all citizens to participate in the voting process.”