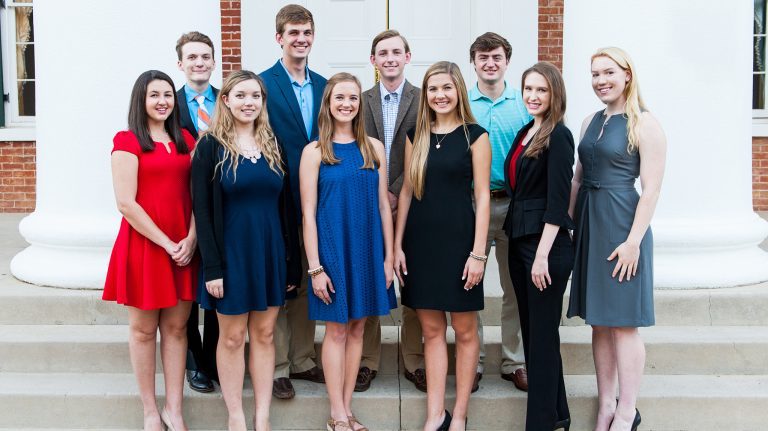 This fall, 36 partner schools across the country collectively welcomed the 11th class of Stamps scholars to their campuses. Selected from more than 400,000 applications, the new first-year class comprises 209 scholars with diverse academic interests including biology and neuroscience, public policy, mathematics, biochemistry, computer science, linguistics and anthropology, and international studies.

For 2016–17, 12 incoming University of Mississippi freshmen were selected as Stamps scholars, making UM one of only four universities to award more than 10 Stamps scholarships to incoming students.

Stamps scholars are chosen for their strong leadership potential, academic merit and exceptional character. The Stamps Family Charitable Foundation supports promising students who are eager to make their contributions to the world and possess the work ethic to make their dreams a reality.

“At its core, the Stamps program is about finding students with enormous potential to use their intellectual talent to make a difference in the world, and giving them every tool and opportunity to see that through,” said Douglass Sullivan-González, dean of the Sally McDonnell Barksdale Honors College and professor of history. “We help them develop as citizen scholars, to challenge one another and pursue their full potential.”

Valued between $98,000 and $138,000 each, the Stamps Scholarships at UM have become the most comprehensive, full scholarship packages for in-state and out-of-state students. Each package covers the full cost of attendance, along with a $12,000 stipend for unique educational pursuits, including study abroad, research internships and academic conferences. 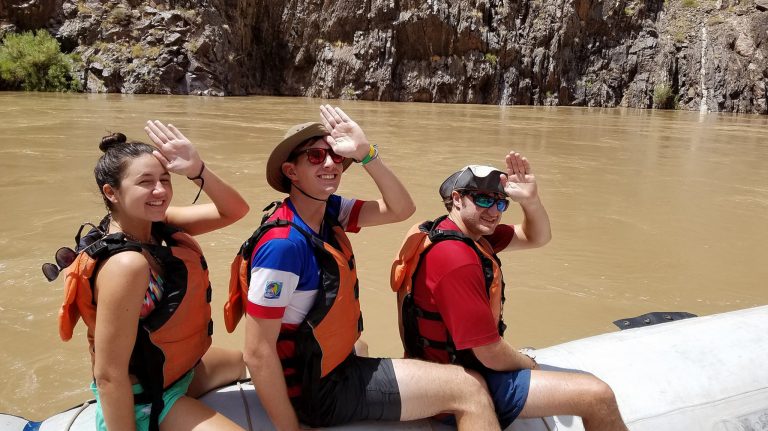 Anna Daniels (left), Robert Grady Pickering and Tom Fowlkes throw up a ‘Landshark’ sign during their visit to the Grand Canyon as part of their introductory excursion as Stamps scholars at the University of Mississippi. Photo courtesy James Asbill

Other benefits include: service-learning opportunities; access to a growing network of scholars and alumni; and opportunities to attend biennial conventions, where Stamps scholars can network with one another and learn from recognized leaders. Perhaps the most rewarding perk of all is the comradery and support of fellow Stamps scholars.

“It’s amazing to have access to some of the greatest minds at this university,” Wooten said. “I have been put in a group of undergraduates that push my boundaries and make me aware of unique points of view.

“It’s an intensely well-rounded undergraduate experience. I didn’t know the Stamps cohort was so tightly knit before I got here, but it’s amazing because I have so many new friends and kindred spirits.”

The 12 freshmen join 11 sophomore, junior and senior Stamps scholars at UM. The university will also celebrate its first graduating class of Stamps scholars in May 2017, making it quite a notable year for the program.

“We are tremendously proud of our Stamps Scholars and the level of excellence they contribute to our campus,” Chancellor Jeffrey Vitter said. “They are truly talented, gifted students who will have a great impact on lives and communities, here in our state and around the world.

“We treasure our partnership with the Stamps Family Charitable Foundation and are grateful for their ongoing support of efforts to strengthen our overall academic environment.”

Another key element of the program is the opportunities for students and universities to work together within the national Stamps network, said Noel Wilkin, UM senior associate provost.

“The Stamps Foundation is realizing its mission of helping outstanding students pursue unique and beneficial educational opportunities,” Wilkin said. “We are pleased that this scholars program enables talented students to take advantage of our outstanding academic programs. 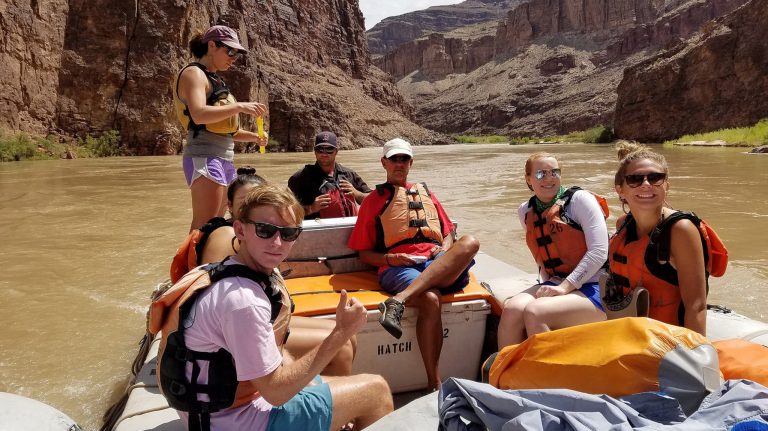 Ben Bradford (left) and Anna Daniels (behind) relax with their tour guides and fellow students Eveanne Eason (second from right) and Sally Boswell as they float down the Colorado River during their visit to the Grand Canyon. Photo courtesy James Asbill

“It has been exciting to see our own vision of the Stamps scholars program come to life; and with this large class joining our existing scholars, we took a large step forward this year. We are extremely grateful to the Stamps Foundation for investing in our students.”

Stamps Scholars are encouraged to organize an excursion that will expand their experience as individuals and bring them together as a group.

Eight of the freshmen—Asbill, Boswell, Bradford, Daniels, Eason, Pickering, Fowlkes and Methvin—spent a week before the fall semester rafting, hiking and camping in the Grand Canyon. The trip challenged the students and helped them bond as friends and allies.

“I learned more about myself, my peers, and our place in the world,” Daniels said. “In the Grand Canyon, I consistently surprised myself, learning to say yes, agreeing to try things that terrified me. Further, I developed a bond with my fellow scholars as we discovered how unbelievably different, yet profoundly similar, we all are.”

Fowlkes agreed: “I left Memphis for a seven-day rafting trip down the Grand Canyon not knowing a soul who’d be with me. By the end of the trip, I had seven real, deep friendships that I could walk into college with. The views of the canyon, the quiet stillness of the nights sleeping under the stars and the rushing rapids were all secondary to the formation of the friendships.”

The remaining four freshmen will travel to Australia in December.

“I cannot wait to grow closer to my fellow Stamps Scholars on this long and exciting journey,” Jefferson said. “We plan to learn about the native wildlife by visiting the Great Barrier Reef and a koala sanctuary, as well as the history of Australia and the Aboriginal Australians by visiting museums together.”

The 12 students include five National Merit finalists and one semifinalist. The cohort boasts an average 3.95 GPA and 34 ACT, including one top ACT score of 36, and all were very active in their high schools and communities:

Asbill, an international studies major, was a National Merit finalist, belonged to several academic student organizations and the symphonic and marching bands. He was the speech and extemporaneous captain of his debate team, a member of the Most Outstanding Delegation at 2016 MS Model UN Security Council and a top 5 ranked MHSAA forensics competitor.

Boswell, a international studies major, was a National Merit finalist, member of academic and arts organizations, served as president of the Mississippi United Methodist Conference Council on Youth Ministries, special projects coordinator of the Ocean Springs Mayor’s Youth Council and was named a Distinguished Young Woman of West Jackson County.

Bradford, an accountancy major, was a National Merit finalist, played varsity golf and tennis, earned the high rank of Eagle Scout in Boy Scouts of America, served as president of Students Without Borders and became the youngest student to ever complete the Gilmore Museum Model-T Driver Certified course.

Daniels, a biology major, was a National Merit finalist and Distinguished Young Woman of Mississippi, served as attorney general at Mississippi Girls State and as president of the Madison Mayor’s Youth Council. She made All-Conference pitcher for North AAA fast pitch softball and was a state semifinalist in Poetry Out Loud.

Eason, a psychology major, was top student amongst Americans in Beijing and founder of Amigos Contigo, a bilingual theater troupe performing for underserved children in Memphis, won a University of Chicago Book Award and was captain of her swim team and a pediatric rehabilitation intern at Le Bonheur Children’s Hospital.

Fowlkes, a public policy leadership major, was captain of both his football and soccer teams, president of his high school student body and a commissioner for student welfare on student council. As part of his efforts to earn the rank of Eagle Scout, he renovated the largest open-air pavilion at Memphis’ largest public park, Shelby Farms.

Jefferson, a biology major and dancer, vocalist and scoliosis advocate, served as founder of the North Georgia Curvy Girls Scoliosis Support Group and started the Georgia chapter of the National Scoliosis Foundation. She attended a CDC Disease Camp for public, global and environmental health, returning the following summer as a paid counselor.

Methvin, a public policy leadership major, cross-country runner and Boys State delegate, is a graduate of the Mississippi School for Mathematics and Sciences, where he participated in the Russian Club and other organizations. He captained his soccer team and volunteered with the Columbus Cultural Heritage Foundation as a historical performer and U.S. Sen. Thad Cochran’s 2014 campaign.

Sullivan, a biology major, was a National Merit semifinalist and valedictorian, named most outstanding female student at the Alabama Governor’s School and received a certificate of merit for poetry from the Alabama Writer’s Forum. She was show choir captain, founder and president of the chemistry club and took a gap year to spend a semester volunteering in Northern Ireland.

Watson, an international studies major and resident of seven states in three countries on three continents before college, was a delegate at both the Humanities Symposium for Youth in Singapore and the Millis Institute Witherspoon Fellowship at Christian Heritage College. She also founded and served as president of the SAT Club at Citipointe Christian College and was valedictorian of Nova Performing Arts Program.

Wooten, a linguistics major, was valedictorian and yearbook editor,  academic team captain, flute section leader in marching band and first chair in concert band and choir director at St. Jude the Apostle’s Catholic Church. He also participated in several academic clubs and served as vice president of the drama club.

“We’re very excited about this new class of Stamps scholars,” said Roe Stamps, founder and chairman of the Stamps Foundation. “A hearty congratulations to our partner schools for selecting and attracting such a wonderful group of students.”

The freshman scholars are already hard at work on the Oxford campus. They have found roles among the Honors College, Croft Institute for International Studies and the Chancellor’s Leadership Class; serve as fraternity pledge class president or freshman council member on the Associated Student Body; play intramural soccer and tutor Ole Miss student-athletes; give their time and talents through faith-based and service organizations; and have enlisted in the American Medical Student Association, the Italian and Russian clubs, Rebels Against Sexual Assault and UM Pride.

“Already in my first semester of college, it is apparent to me that Stamps scholars is more than just a scholarship – it is a diverse community of wonderful minds who genuinely desire to come together and improve the world in their own unique ways,” Watson said.

“It means the world to me to be included in this group of amazing people and to have the opportunity to pursue my talents and goals with their support. Although I am new to this campus and program, I can already see that it is special; I have no doubt that I will be able to make a real difference with the support of the Stamps program and community at Ole Miss.”

To help support high-achieving students through scholarship and enrichment opportunities, consider making a gift to the University of Mississippi Foundation by mailing a check with your intent noted in the memo line to 406 University Ave., Oxford, MS 38655; by giving online at http://www.umfoundation.com/makeagift/ ; or contact Katie Morrison, director of corporate and foundation relations, at 662-915-2135 or katie@olemiss.edu.

To learn more about the Stamps Foundation, visit http://www.stampsfoundation.org/.