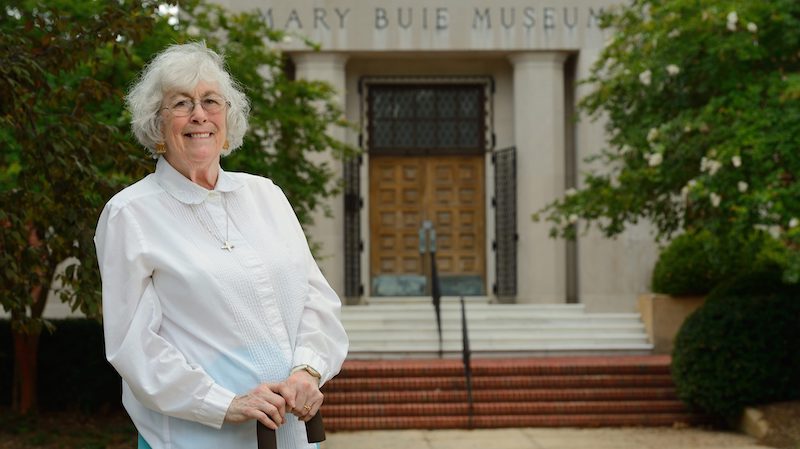 Lucy Turnbull, a longtime UM professor of classical archaeology, helped establish the University Museum and served as its director from 1983 to 1990. Photo by Robert Jordan/Ole Miss Digital Imaging Services

Former University of Mississippi professor Lucy Turnbull will always be remembered as a beloved educator who could make her curriculum both easy to understand and infinitely interesting to her students, a mentor and a champion of civil rights at Ole Miss.

Her enthusiasm for the classics was contagious, which propelled her students to success in her art history, archaeology, mythology and classical civilization courses. Turnbull, 87, of Oxford, joined the university faculty in 1961 and taught until 1990. She died Sunday (April 21).

Dewey Knight, recently retired UM associate director of the Center for Student Success and First-Year Experience, was one of Turnbull’s friends. He entered the university as a freshman in 1966 and found himself in one of her classes that year.

“She walked into the classroom that first day,” Knight said. “There were about 25 of us, and we were immediately very afraid of Professor Turnbull. She was incredibly intelligent. She could read Greek like we read English.

“We all were in fear of her, but we had the ultimate respect for her, because it was very obvious she was brilliant.”

Services for Turnbull are set for 11 a.m. Friday (April 26) at St. Peter’s Episcopal Church in Oxford. A visitation will precede the service starting at 9 a.m. in the church’s Parish Hall.

Knight calls his former professor “one of the most important change agents” in the university’s history. Her biographical bullet points support that claim.

Born in Lancaster, Ohio, Turnbull earned a bachelor’s degree from Bryn Mawr College and her master’s and doctoral degrees from Radcliffe. She was a John Williams White Fellow and Charles Eliot Norton Fellow at the American School of Classical Studies in Athens. She was the author of many scholarly articles and contributed to books, mainly in the areas of Greek vase painting, mythology and poetry. 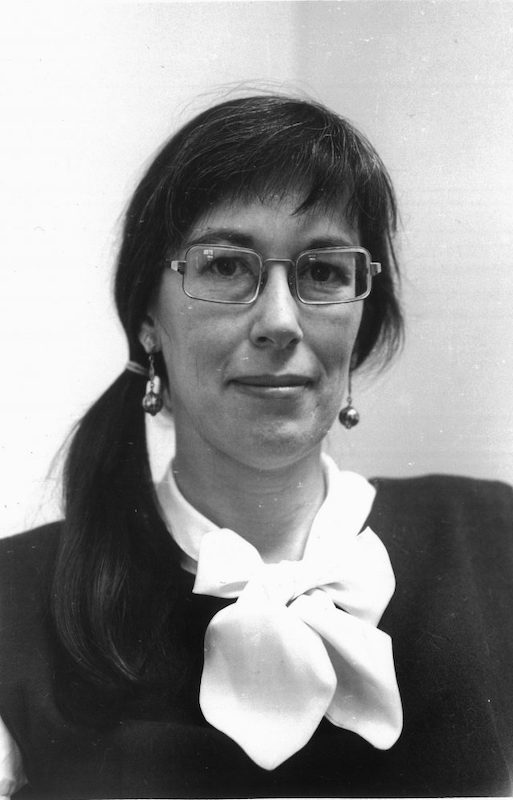 Lucy Turnbull, in a UM faculty photo from the mid-1960s

After holding positions as a museum assistant at Wellesley College and Boston’s Museum of Fine Arts, she joined the UM classics faculty in 1961, as a classical archaeologist.

“Teaching is very energizing, but I didn’t really understand that at the time,” she later recalled. “When you’re teaching, you’re giving something to the students, but they’re also giving back to you. I enjoyed it very much.”

Turnbull was active in the integration of Ole Miss in 1962, when James Meredith became the first black student to enroll at the university. She, as a relatively new faculty member, was among the professors who vocally supported Meredith pursuing his education at the university.

Provost Emeritus Gerald Walton, who joined the UM faculty in 1962, later recalled that the professors who supported integration as part of the local chapter of the American Association of University Professors held formal meetings. Turnbull was elected the group’s secretary.

“Those of us who supported integration became a kind of fraternal group and talked among ourselves a good deal,” Walton said in 2012. “It was good to learn that Lucy was one who did not mind speaking her mind even though we weren’t sure in those days how such people as board of trustees members or legislators – or members of the Ole Miss administration, for that matter – might act. Lucy was a brave woman.”

Meredith often found himself alone on campus. Knight remembers seeing a photo of his friend Turnbull having lunch in Johnson Commons with Meredith and UM professor James Silver, author of “Mississippi: The Closed Society,” surrounded by a sea of empty tables.

She also was an active member of the American Civil Liberties Union, Common Cause, Mississippi Council on Human Relations, National Geographic Society, Smithsonian Associates and the National Organization of Women, among other groups. 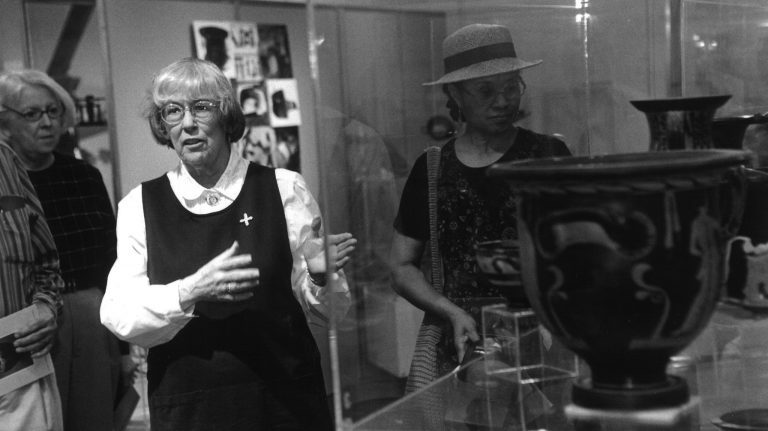 Lucy Turnbull discusses a piece from the University Museum’s collection of Greek and Roman artifacts with museum visitors in the early 1990s. Photo by Ole Miss Digital Imaging Services

Turnbull helped establish the University Museum and served as its director toward the end of her career, from 1983 to 1990. Its opening was one of her favorite memories, as the Department of Classics‘ large collection of Greek and Roman antiquities was moved from Bondurant Hall to the museum, where they remain.

Turnbull’s classroom presence had a lasting effect on Knight, he said. The two became friends, and for 20 years, beginning in 1996, they jointly taught a Sunday school class at St. Peter’s Episcopal Church, where Turnbull was a devoted member who will be memorialized there Friday.

Knight and his wife, Theresa, also were among those invited to “The Christmas Party” at Turnbull’s house each year, where she lived alone, having never married.

The parties, which Knight said she hosted for nearly 50 years, included a who’s who of the university’s liberal arts community and ornaments that Turnbull made by hand.

“The first time we got the invitation, it just said ‘The Christmas Party,’” Knight said. “We didn’t know what was happening. We finally ultimately realized it was a big event, and if you were invited to her house, you felt special.”

He will always remember Turnbull as one of the most important figures in the university’s history and a fierce advocate for the liberal arts education.

“I never met anybody who didn’t like Lucy,” Knight said. “She was just a really special person who was very opinionated and very principled. Even if you didn’t agree with her, you liked her.

“She was an unwavering force. She was a scholar, but she was also a quality person. She made the university better by being a part of it.”