Team studied disruptions in sense of smell in schizophrenia patients 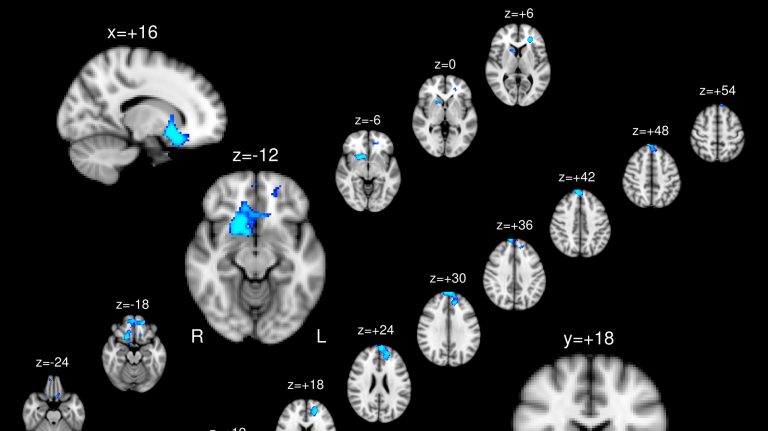 This figure from Ikuta and Kiparizoska’s paper shows parts of the brain that exhibit less symphony with the anterior piriform cortex, the region of the brain associated with the sense of smell. The main region, seen in the three larger images, is the nucleus accumbens, which has been indicated in previous studies to be associated with auditory hallucinations. Submitted photo

A study conducted by a University of Mississippi professor and one of his former students may lead to a better understanding of schizophrenia.

Toshikazu “Tossi” Ikuta, assistant professor of communication sciences and disorders, teamed with Sara Kiparizoska, a 2016 biochemistry graduate from Laurel, to examine how the sense of smell is affected in patients with the disorder.

Their article, “Disrupted Olfactory Integration in Schizophrenia: Functional Connectivity Study,” will appear in the upcoming edition of the International Journal for Neuropsychopharmacology.

“Olfaction, the ability to sense, distinguish and recognize odors, has been known to be affected in schizophrenia, but little has been studied,” Ikutu said. “These studies showed olfactory deficits, or diminished smelling abilities, in schizophrenia patients.”

“Usually, scientific studies have good reason and thick history to do ‘the study,’” he said. “Sara found a gap where almost nobody did intensive brain study. The biggest credit in this study is that Sara discovered that olfactory deficits in schizophrenia is not well-studied.”

A graduate of the Sally McDonnell Barksdale Honors College, Kiparizoska helped conduct the research for her honors thesis. She was referred to Ikuta by Lainy Day, an associate professor of biology and director of the neuroscience minor, because Day knew of her interest in imaging, mental illness, psychology and human studies.

“When I first met Dr. Ikuta, he was very excited for new ideas and willing to help me with my research,” Kiparizoska said. “Our study was an image analysis of the integration of sensory information in these patients.

“Our findings were very exciting because this type of research had not been conducted before.” 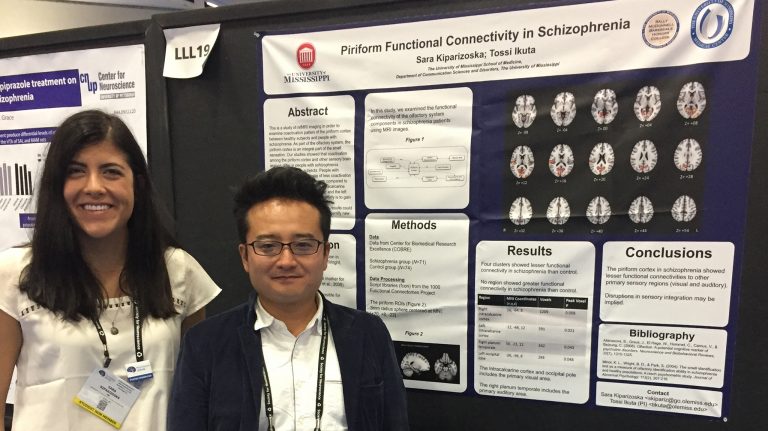 Sara Kiparizoska (left), a 2016 UM biochemistry graduate, and Tossi Ikuta, assistant professor of communication sciences and disorders, show off a poster detailing their research at the 2016 National Society for Neuroscience Convention in San Diego. Submitted photo

Using MRI images from the Center for Biomedical Research Excellence in Brain Function and Mental Illness at the University of New Mexico, the duo compared the inner nasal cavities and tissues that connect them to the brain in individuals with schizophrenia and those without it. The results showed that the nasal passages of schizophrenic patients have less integrated symphony, or connectivity, with brain regions that are responsible for other senses, such as vision and hearing.

“Although we only found that olfactory processing is affected in schizophrenia in this study, it leaves the possibility that examining olfaction may be a potential future target for easier detection of schizophrenia,” Ikuta said.

Both Ikuta and Kiparizoska said they were excited to learn that their article had been accepted for publication.

“We are fascinated by our research and findings and are very thankful that others will be able to learn about it and also use it to establish better treatments or diagnosis methods for these patients,” said Kiparizoska, who recently completed her first year as a medical student at the UM Medical Center.

This experience helped nurture her love for research. Kiparizoska is involved in research in the adult congenital heart program with Dr. Michael McMullan, professor of medicine and director of the program at UMMC.

“I hope to become a physician scientist that integrates research with medicine in order to give my future patients the best care possible,” she said. “Dr. Ikuta was very helpful in helping me create my first paper, and I am so thankful.”

Ikuta said he doesn’t know why an olfaction test has not been utilized, or at least more heavily studied, in patients with schizophrenia.

“As we found, olfaction is related to other pathologies that are known and well-recognized,” he said. “We were able to show this in brain images and we hope give stronger messages to scientists and physicians.”

To read an abstract of Ikuta and Kiparizoska’s article, visit
https://academic.oup.com/ijnp/article-lookup/doi/10.1093/ijnp/pyx045.