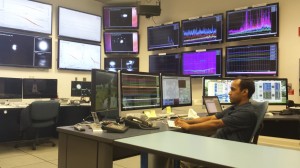 When researchers in the Laser Interferometer Gravitational-wave Observatory Scientific Collaboration announced recently that they had detected gravitational waves for the first time, the discovery was cheered by scientists worldwide.

Two faculty and several students at the University of Mississippi Department of Physics and Astronomy played key roles in constructing the Laser Interferometer Gravitational-Wave Observatory detectors in Livingston, Louisiana and Hanford, Washington, and in analyzing the data collected from them. Other colleagues, although not part of the LIGO group itself, have spent years studying the theoretical aspects of black hole physics and gravitational waves. 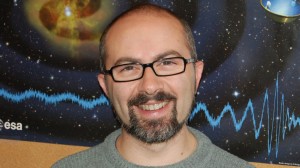 The discovery announced Feb. 11, that LIGO scientists had measured gravitational waves resulting from the violent merger of two black holes, opens “a new window onto the Universe,” wrote UM physicist Emanuele Berti, who is not a member of LIGO, in a “Physics Viewpoint” that accompanies the historic paper in the latest issue of Physical Review Letters.

“With Advanced LIGO’s result, we are entering the dawn of the age of gravitational wave astronomy: with this new tool, it is as though we are able to hear, when before we could only see,” Berti said in the piece, which in just two days became the most-viewed article in the history of the publication.

The discovery has opened a whole new frontier of exploration and captured the world’s imagination, said Lucien Cremaldi, UM chair and professor of physics and astronomy.

“The recent discovery of gravity waves is a very important event in the history of science,” Cremaldi said. “The Physical Review recognizes Dr. Berti’s important work on black hole mergers, the source of the discovery, and honored him with the ‘Viewpoint.’

“We are very proud of the work the LIGO team has performed at the university and also very proud of Dr. Berti’s seminal theoretical research he performs in the area of black holes at UM.”

Being asked to write the article was a tremendous honor not only for Berti, but also for the entire UM physics department, said Katherine Dooley, an assistant professor in the department and a member of the LIGO group.

“Viewpoint articles are written by prominent experts in their field,” Dooley explained. “The fact that Dr. Berti was asked to do so is a reflection of the respect he has earned from the scientific community for both his achievements in research and his talent to illuminate the impact of such a discovery to a broad audience.”

“Quite importantly, the publication of the LIGO discovery paper together with the honor that was bestowed upon Dr. Berti to write a Viewpoint about it speaks to the strength of the gravity group at Ole Miss. Our expertise spans the spectrum from theory to data analysis and instrumentation, and we’ve all made an impactful contribution to the process of scientific discovery and dissemination of the results.”

The existence of gravitational waves was first predicted by Albert Einstein in 1916, but their direct detection eluded scientists for a century. In September 2015, a clear signal from a binary black hole merger was detected simultaneously in both LIGO detectors.

The Ole Miss LIGO group was founded in 2007 by Marco Cavaglia, an associate professor of physics and astronomy. Cavaglia and his students have contributed to understanding artifacts of the instrument data that come from sources other than gravitational waves, a critical component for being able to positively identify a gravitational wave signal.

Since 2012, he has served as assistant spokesperson for the LIGO Scientific Collaboration, filling an important management role within the international team of researchers.

Dooley joined the UM faculty last fall after having worked more than nine years at the California Institute of Technology and the Max Planck Institute for Gravitational Physics (Albert Einstein Institute) in Hannover, Germany, on building and improving the LIGO and GEO600 detectors. She also designed techniques to control the angular pointing of the laser beam, helping push the limits of the precision measurement technology needed to make the detection of gravitational waves possible.

“I am visiting the California Institute of Technology as part of my sabbatical,” Berti said. “Dr. Dooley was here before moving to Oxford, and she regularly visits Caltech. Key people working on the instrument tell me that we would have never seen this signal if it were not for Kate’s crucial improvements to the initial LIGO design.”

Berti, who joined the UM faculty in 2009, has contributed to the theoretical understanding of the first numerical simulations of binary black holes—work that became possible after 2005—and he has worked extensively on the oscillations of the distorted black hole resulting from the merger.

Distorted black holes emit a characteristic gravitational wave signal known as “ringdown” because their oscillations resemble the sound emitted by a ringing bell. The ringdown is particularly important for “heavy” black holes, such as those observed in the recent discovery.

Berti is among the world’s leading experts on the theory of black hole mergers and gravitational waves. Physical Review Letters asked that he write a “Physics Viewpoint” article to accompany the LIGO group’s discovery paper, seeking an independent view of someone outside the LIGO collaboration.

“I got an email on January 20 telling me that I would receive the paper the next day,” Berti said. “I had already heard rumors that LIGO had observed black hole mergers, so that night I could not sleep. When I finally saw the gravitational wave signal in the paper, my jaw dropped. Never would I have thought in my life that we could see a signal that clear so early.”

Berti’s Physics Viewpoint is meant as a nontechnical introduction to the reasons why this discovery was so hard, why it matters so much and what will come next. Read it at http://physics.aps.org/articles/v9/17.