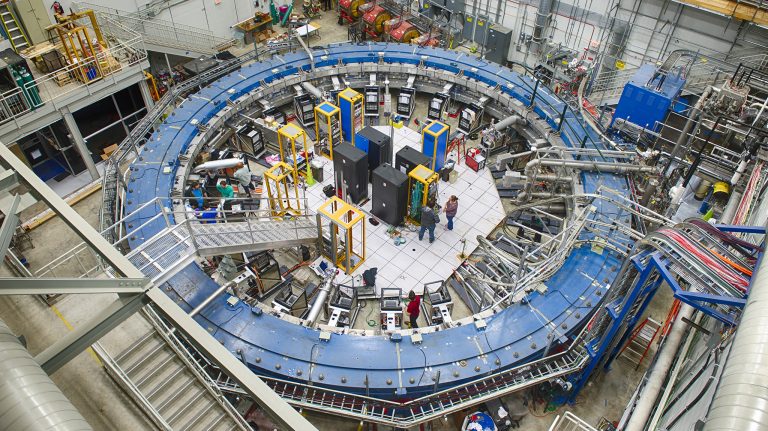 Scientists install equipment and prepare the Muon g-2 ring, a 50-foot electromagnet, to take muons at the Fermi National Accelerator Laboratory. The work is part of an experiment to determine whether undetected elementary particles exist or if the Standard Model of Physics is complete. Photo courtesy Fermilab

When scientists at the U.S. Department of Energy’s Fermi National Accelerator Laboratory fired a beam of tiny particles called muons into a giant electromagnet late last week, it signaled the start of a three-year effort that could yield another landmark discovery in particle physics.

It’s a project with some strong Mississippi ties: Physicists from the University of Mississippi have played key roles in the hardware development and data analysis for the collaborative experiment, and the project’s central component traveled through northeast Mississippi on a monthlong journey from New York to the Chicago suburbs.

The Muon g-2 experiment at Fermilab could rewrite scientists’ picture of the universe and how it works. On May 31, the 50-foot-wide superconducting electromagnet at the center of the experiment saw its first beam of muon particles from Fermilab’s accelerators, the first step in an effort to measure just what happens to those particles when placed in a stunningly precise magnetic field.

“The Muon g-2 experiment’s first beam truly signals the start of an important new research program at Fermilab, one that uses muon particles to look for rare and fascinating anomalies in nature,” said Nigel Lockyer, Fermilab director. “After years of preparation, I’m excited to see this experiment begin its search in earnest.”

Another person excited to see the project begin is Breese Quinn, an associate professor of physics at UM and a collaborator in the Muon g-2 project. Quinn has been involved in the project for four years, and his team – including postdoctoral research associate Jenny Holzbauer and graduate student Wanwei Wu – are at Fermilab to help set up the experiment.

The UM team is responsible for putting together the storage beam chamber for the muon beam and the equipment to steer it.

“They’ve done fantastic work on that,” said Quinn, who will travel to Fermilab this week to spend much of June working on the project. “Those systems are operating beautifully, and they’re currently being tuned up.”

Quinn and his group also are working on studies to help understand the dynamics of the muon beam.

“These studies are really key to this experiment being able to reach the degree of precision needed to provide conclusive evidence of what we’re looking for,” he said.

The goal of the experiment is to precisely measure how much muons wobble on their axis as they spin in a magnetic field. The Standard Model, a landmark, 40-year-old theory that describes three of the four fundamental forces in the universe, predicts how much muons should wobble, but an earlier experiment suggested the wobble may be greater than predicted.

That would mean that previously undetected particles are present, influencing the motion of the muons, Quinn said.

“If new particles exist outside the Standard Model, it would establish that there are more things in heaven and Earth than are dreamt of in our philosophy,” he said. “It would be proof of new building blocks of matter, and that’s exciting.”

Getting to this point was a long road for Muon g-2, both figuratively and literally. The first generation of this experiment took place at the DOE’s Brookhaven National Laboratory on Long Island in the late 1990s and early 2000s.

The results there indicated that the muons wobbled more than predicted, but the experiment could not measure the movement with enough precision to be conclusive. So scientists began planning a new experiment, using the capabilities of Fermilab to boost the experiment’s precision by a factor of four.

Since it would have cost 10 times more to build a completely new machine at Brookhaven rather than move the magnet to Fermilab, the Muon g-2 team transported the fragile, 50-foot-wide superconducting magnet in one piece from Long Island to the suburbs of Chicago in the summer of 2013. 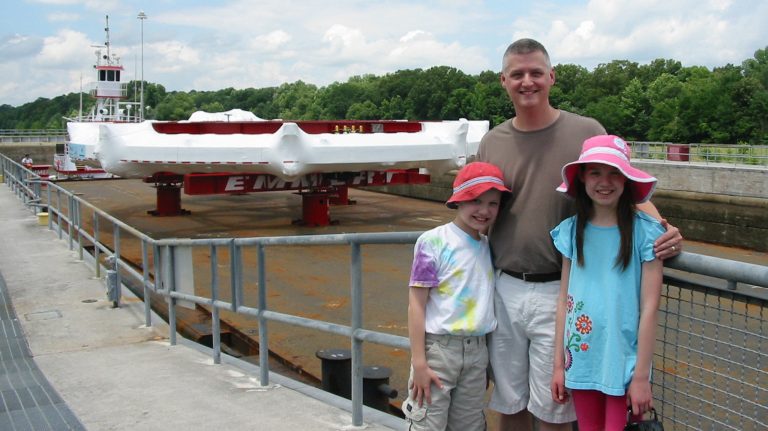 Breese Quinn and his son, Aidan, and daughter, Erin, watch the Muon g-2 ring pass through the G.V. ‘Sonny’ Montgomery Lock on the Tennessee-Tombigbee Waterway on July 15, 2013. Quinn is among the collaborators on a landmark experiment using the massive electromagnet at Fermilab. Photo courtesy Breese Quinn

The magnet took a barge south around Florida, up the Tennessee-Tombigbee waterway and the Illinois River, and then was driven on a specially designed 18-axle truck over three nights to Fermilab. The journey covered 3,200 miles.

As the magnet made its way up the Tenn-Tom, Quinn and his family watched it go through the G.V. “Sonny” Montgomery Lock in Itawamba County. But getting the magnet to the Chicago suburbs was only half the battle.

“Since it arrived, the team here at Fermilab has been working around the clock installing detectors, building a control room and, for the past year, adjusting the uniformity of the magnetic field, which must be precisely known to an unprecedented level to obtain any new physics,” said Chris Polly, project manager of the Muon g-2 experiment. “It’s been a lot of work, but we’re ready now to really get started.”

Over the next few weeks the Muon g-2 team will test the equipment installed around the magnet, which will be storing and measuring muons for the first time in 16 years. Later this year, they will start taking science-quality data, and if their results confirm the anomaly first seen at Brookhaven, it will mean that the elegant picture of the universe that scientists have been working on for decades is incomplete, and that new particles or forces may be out there, waiting to be discovered.

The first results should be available in about a year, Quinn said. The full run is scheduled to take three years to get full sensitivity and precision from the equipment, though.

“It’s an exciting time for the whole team, and for physics,” said David Hertzog of the University of Washington, co-spokesperson of the Muon g-2 collaboration. “The magnet has been working, and working fantastically well. It won’t be long until we have our first results, and a better view through the window that the Brookhaven experiment opened for us.”

The Muon g-2 collaboration includes more than 150 scientists and engineers from more than 30 institutions in nine countries. The experiment is supported by DOE’s Office of Science and the National Science Foundation.

For more about physics research at the University of Mississippi, go to https://physics.olemiss.edu/.