Search by team of professors, graduate students resumes this spring 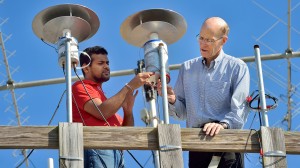 While lightning flashes are a common occurrence during severe weather, their causes remain a mystery, but a team of University of Mississippi researchers is working to unlock the secrets of these beautiful yet dangerous forces of nature.

Three UM physicists and three graduate students will resume collecting data on lightning beginning in late April or early May. The study, which is expected to continue through August, is funded by the National Science Foundation.

“Initially, we conducted lightning studies at Kennedy Space Center in Florida,” said Thomas Marshall, professor of physics and astronomy. “Based on our findings there, NSF awarded us funding to conduct studies here in northern Mississippi.”

“I think a lot of things will be different from our Florida campaign in 2010-2011,” Karunarathne said. “We’ve published more than 16 peer-reviewed articles using that data. This allows us to understand the limitations of our Florida data set, so the new data collection happens with lots of ideas in mind.”

Another difference will be the use of new instruments. In Florida, the team used only electric field change meters, a high-speed camera and a high-definition camera.

“Here, we will be using improved versions of the electric field change meters used in Florida,” Karunarathne said. “We will also use two high-speed cameras instead of one, and add logarithmic radio frequency antennas, electric field derivative antennas and all-sky light sensors to our instrumentation list. The use of the technology will be also improved.”

Although many people are unaware of the dangers, lightning is a substantial hazard to human life and property.

To study the strikes, the UM team will set up an array of three lightning sensors at nine sites within a 25-mile radius of the Oxford campus.

One site is already installed at the UM Field Station off County Road 202 in Lafayette County, and another site is on the Oxford campus.

“We’re still looking for other site locations,” Marshall said. “Anyone who might be interested in volunteering to let us install an array on their land should contact us as soon as possible.”

While the exact cause of lightning strikes is still uncertain, the development and use of sensitive technology in the studies has revealed certain things, Marshall said.

“For example, we found two things happen in the very beginning of a lightning strike,” he said. “First, there is a very brief but measurable pulse of radio waves in the very high frequency band. This pulse usually lasts only 30 microseconds.

“The second thing that happens is a growth in the electric field. Called an Initial Electric Field Change, it can only be seen if the sensors are within 5 miles of the lightning activity. That’s why the sensors must be located closely together within a relatively small area.”

In addition to the sensors, the researchers will employ two very high-speed video cameras, able to record some 50,000 frames per second. The first camera will record the earliest parts of the flash. The second will take optical spectra to determine the temperature of different parts of a flash.

“The cameras used in Florida caught the early stages of the flashes, but were not close enough to see the IEFC,” Marshall said. “We’re hoping to see it this time. We also want to watch how non-conducting air warms to conducting air, which is about 5000 Kelvin, or 9,000 degrees Fahrenheit.”

With the exception of the two cameras, which are being loaned to the study by collaborator Richard Orville of Texas A&M University, the computers and all the programs used to collect and analyze the data are custom-built.

“I maintain those programs and develop new tools as needed,” Karanurathne said. “At this stage, I am working on adjusting our old instruments, mainly electric field change meters, to be compatible with our new experiment here. I am also building a few new instruments, such as an all-sky light sensor.”

One of the computer tools the researchers use extensively is called PBFA, or Position by Fast Antenna, which uses arrival times of a lightning pulse at multiple locations to find out where and when it occurs. With good sensor placements, scientists can determine the location of lightning pulses within a few hundred meters.

“One of my jobs will be to make sure that the PBFA works well to obtain the locations of most of the tiny lightning pulses inside the thunderstorm,” Karanurathne said. “Later during the spring and summer, I will be actively working on data collection.

“The data will be sent to a server at Ole Miss via ethernet. A special website will be set up to report the current status of the remote sensors. Solar power will be used in remote sites.”

Stolzenburg said she is anticipating great findings from the observations.

“We already have lightning data acquired with a video camera running at 50,000 frames per second,” she said. “At this speed, we’ve discovered that many small processes of the flashes are visible, from the initiation within the cloud to unexpected activity occurring after the return strokes have connected to ground.

“The addition of lightning spectra will help us determine which early processes are truly conductors and which are building up charge for the flash to continue.”

As before, the results of the new study will be written up and submitted to one or more peer-reviewed scientific journals. But the team is hopeful their findings will prove even more practical and useful in the future, Marshall said.

“Everything we can learn about lightning helps us understand how it works and has value,” he said. “We’re not sure if this study will help with protection from lightning strikes in the future, but it might.

“There are a lot of new ways in which lightning data are now being used to improve short-term forecasts, also. So more knowledge about how lightning starts could eventually help in severe weather warnings.”

The possibilities of new discoveries are exciting, Karanurathne said.

“One of the fascinating facts about doing research is that you expect to do something, but in addition you find something completely new,” he said. “I am pretty sure we will end up doing some science we never planned for.”

For more information about or to discuss the possibility of providing a sensor site for the Lightning Research Project, contact Marshall at 662-915-5325 or by email at marshall@olemiss.edu. To learn more about the Department of Physics and Astronomy, visit the website.