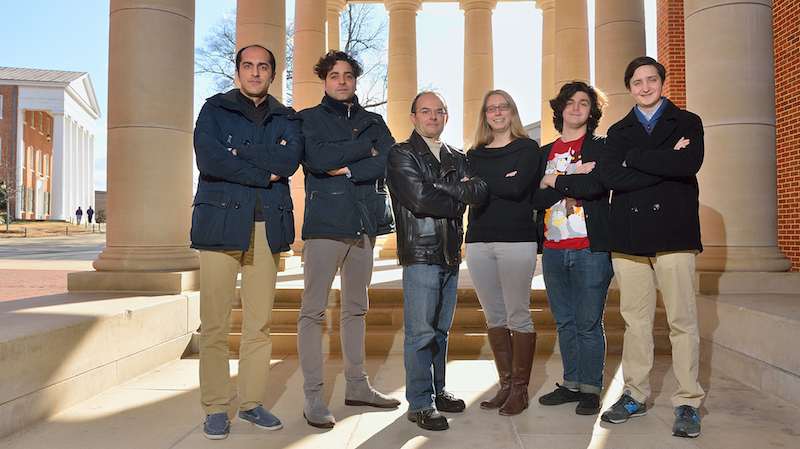 Physicists at the University of Mississippi will share in a $3 million prize being awarded to more than 1,000 scientists for their historic discovery of gravitational waves.

The Special Breakthrough Prize in Fundamental Physics will be shared among Kip Thorne, Rainer Weiss and Ronald Driver, founders of the Laser Interferometer Gravitational-Wave Observatory Scientific Collaboration, and scores of physicists and engineers on the team.

The three founders will divide $1 million among them, with the remaining $2 million shared equally by the 1,012 other researchers and engineers on the LIGO team. Each receives about $2,000. The prizes will be awarded at a formal ceremony later this year.

“I was happy to know that the work of all my LIGO and Virgo colleagues and I were recognized in such a way,” said Marco Cavaglia, UM associate professor of physics and astronomy and assistant spokesperson for the LIGO Scientific Collaboration. “The prize itself is not important, but the recognition for being part of a scientific breakthrough, that’s really exciting!”

Katherine Dooley, UM assistant professor of physics and astronomy and senior member of the LIGO Scientific Collaboration, expressed a similar response.
“The award is certainly a very welcome surprise and honor,” she said. “I appreciate the decision by the selection committee to share the award amongst everyone who worked towards making this discovery possible. I hope the press coverage will result in a continued engagement of the public’s fascination with the discovery and encourage a new generation of curious scientists.”

Thorne, professor of theoretical physics at California Institute of Technology, said it was a “great pleasure” to share the prize with the LIGO team, and spoke of his profound gratitude to the team “for pulling off this discovery so successfully.”

“Gravitational waves are a whole new way to explore the universe,” he said. “They are the ideal tool for probing phenomena in which gravity is ultra-strong, and space and time are strongly warped, such as colliding black holes and the universe’s big bang birth.”

It is likely, for example, that a great richness of weird phenomena occurred in the first fraction of a second after the universe was born, Thorne said. Gravitational waves are likely to reveal the details.

“For centuries into the future, gravitational waves will be used, hand-in-hand with electromagnetic waves, to explore the universe,” he said.

The LIGO team’s observation of gravitational waves brought a 50-year search to a spectacular conclusion. Using twin instruments sensitive enough to detect distortions in space-time as small as one-thousandth the diameter of an atomic nucleus, they recorded the gravitational shudders released when two black holes spiraled ever closer together and ultimately collided in a violent merger.

“Things that seemed like science fiction when I was a graduate student are now real as a result of the LIGO observation of gravitational waves,” said Ed Witten, chair of the prize selection committee. “Now that we are able to observe gravitational waves, there is no telling what we will find. It may be that the skies are full of ‘cosmic strings’ that we can only observe because of their gravitational signal.”

The cash is the latest to be handed out by the Breakthrough Prize Foundation, an organization backed by Silicon Valley entrepreneurs, including the Russian internet billionaire, Yuri Milner, Facebook’s Mark Zuckerberg and Anne Wojcicki, the co-founder of 23andme. The foundation has handed out more than $160 million to scientists since the prizes were established in 2012.

The intention, Milner has said, is to raise the public profile of scientists and turn them into the nerdy equivalent of rock stars.

“I am extremely pleased that the organizers of the Breakthrough prize have decided to honor the entire team of people that made the discovery,” said Weiss, professor of mathematical physics at MIT. He feels the prizes could help convey complex science to the public.

“If they are associated with a proper and easy-to-understand explanation of the science, they serve a wonderful purpose to bring everyone into the action,” he said.
That should not be understated, Thorne said.

“Their greatest value, I think, is to raise public awareness of science and its remarkable achievements,” he said. “And that is very important. Science is a crucial tool for the future of humanity and for solving today’s societal problems; but science cannot achieve its potential unless the public understands and appreciates it. Prizes like this are an important part of that.”

The Gruber Foundation also recently presented the 2016 Cosmology Prize to Weiss, Thorne, Drever and the entire LIGO team for pursuing a vision to observe the universe in gravitational waves, leading to a first detection that emanated from the collision of two black holes.

This remarkable event provided the first glimpse into the strong‐gravity regime of Einstein’s theory of general relativity that governs the dynamics of black holes, giving direct evidence for their existence, and demonstrating that their nature is consistent with the predictions of general relativity.”

Last month, Milner and Stephen Hawking launched the Breakthrough Starshot, an ambitious space project that aims to solve the technological problems that stand in the way of hurling a tiny, lightweight probe to our nearest star, Alpha Centauri, 25 trillion miles away.

“I really hope that the Breakthrough Starshot idea will prove to be practical,” Witten said. “There are a lot of technical obstacles to overcome. It probably sounds as far away as gravitational wave detection sounded when LIGO got started around 1970 or so.

“LIGO only became real because people were excited and worked hard and the U.S. National Science Foundation was willing to make a huge and risky investment.”