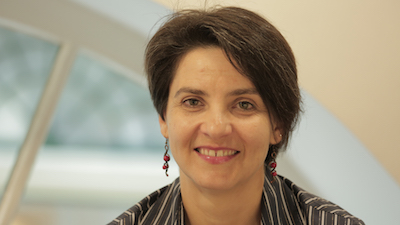 Associate Professor of German Corina Petrescu is a Humboldt Fellow.

A University of Mississippi modern languages professor has earned a prestigious research award, which will help further her studies of Jewish life in Europe following World War II.

Corina Petrescu, associate professor of German, is the recipient of the Alexander von Humboldt Fellowship. The award funds 18 months of research with the option to spend all that time in Germany at once or to divide it into three stays.

Petrescu is headed this week to Germany, where she plans to stay through July 2017 and then return for two summers.

“I was very happy to become a Humboldt fellow,” Petrescu said. “It is the most prestigious award coming out of Germany for any field of inquiry.”

Petrescu applied for the award in November 2014 to fund her research, which is to develop a cultural history of Teatrul Evreiesc de Stat (the State Jewish Theater) in Bucharest, Romania, from its establishment in 1948, in the aftermath of World War II and the Shoah, to the present.

“The project seeks to uncover the factors that made this founding possible, as well as situate the theater in the historical, cultural and political context of communist and post-communist Romania,” she said. “The purpose of this research is to further a better understanding of Jewish life in post-Second World War Eastern Europe.”

During her time in Germany, Petrescu will attend conferences to present her work.

“The first one takes place between Sept. 12 and 14 in Dusseldorf, Germany,” she said. “I plan to finish a manuscript for a book by the end of my fellowship.”

Donald L. Dyer, professor of Russian and chair of the Department of Modern Languages, said he looks forward to seeing the results of Petrescu’s work in Germany.

“Being awarded a Humboldt Fellowship brings important and well-deserved recognition to her, the department and the university as a whole,” Dyer said. “The Humboldt award is impressive in itself, but all the more so given its magnitude and scope.

“Dr. Petrescu has joined an elite group of scholars conducting first-rate research projects, and we all look forward to the product that emerges from her current project as well as her future research endeavors.”

Petrescu earned her doctorate from the University of Wisconsin. Her research interests include National Socialist Germany, representations of 1968 in the German and Romanian imagery, transcultural literature, German-Jewish relations from the 18th century to the present and Eastern European Yiddish theater.

For more about the UM Department of Modern Languages, visit http://modernlanguages.olemiss.edu/.