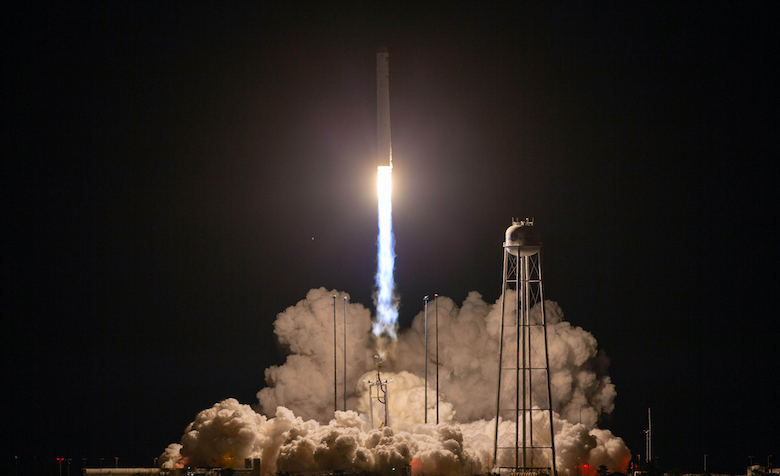 A Northrop Grumman Antares rocket launches Oct. 2 from NASA’s Wallops Flight Facility in Virginia. The resupply mission to the International Space Station included in its payload bacteria grown at the University of Mississippi that is part of biology professor Patrick Curtis’ research into bacteria growth in weak gravity. Photo courtesy NASA/Patrick Black

Bacteria grown in a University of Mississippi laboratory are zipping around the Earth about every 90 minutes, racing roughly 250 miles above the planet aboard the International Space Station.

The microbes are part of UM biologist Patrick Curtis’ research that aims to better understand how bacteria respond in weak gravity, which could lead to better bacterial control mechanisms in space and improve future spaceflights.

The bacteria were included in a payload launched Oct. 2 aboard a Northrop Grumman Cygnus resupply spacecraft from NASA’s Wallops Flight Facility in Virginia. The nearly 8,000 pounds of scientific investigations, technology demonstrations, crew supplies, vehicle hardware and Curtis’ bacteria docked with the International Space Station Oct. 5 as the orbital laboratory zoomed far above the South Pacific Ocean at more than 17,000 mph. 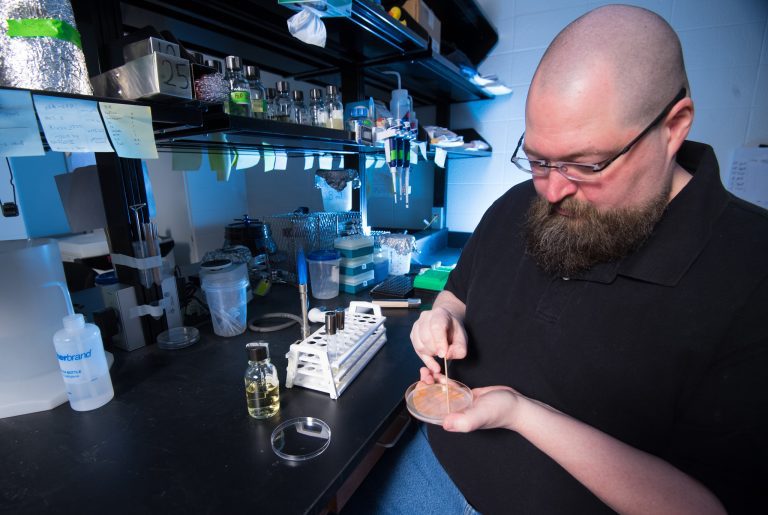 Patrick Curtis, UM associate professor of biology, recently sent samples of bacteria to the International Space Station for a study of how the organisms respond in weak gravity. Photo by Kevin Bain/Ole Miss Digital Imaging Services

“I’ve always been interested in space, but I never imagined my research would lead me here,” said Curtis, an associate professor of biology whose bacteria research is funded through an International Space Station Flight Opportunity Award from NASA. “When one thinks of space biology, bacteria don’t really come to mind, but the more I looked into the matter, the more interesting it became.

“I’m hoping this will continue to be an area of research for my laboratory.”

Curtis’ experiment is the second UM research component aboard the ISS. In November 2019, nano-reinforced materials created at the Center for Graphene Research and Innovation on the Ole Miss campus were sent to the ISS as part of a payload from Wallops Flight Facility.

“Space on the ISS and launch vehicles is precious and reserved for those experiments with high promise and impact,” said Josh Gladden, UM vice chancellor for research and sponsored programs. “UM is thrilled to have not one, but two such experiments being conducted simultaneously.

“There are so many challenges to long-term human space travel, and effectively managing bacteria in that environment could mean the difference between the success and failure of the mission. Dr. Curtis’ work will help shed light on that important question.”

The bacteria will spend the next couple of months aboard the ISS before catching a return flight back to Earth. Once the samples are back in Curtis’ lab, he and others will extract genomic DNA from the bacteria and perform sequencing on it. Then the researchers will analyze the sequence data, which is expected to lead to further research.

“Microbial growth in space vehicles can – and has been – a major problem. A better understanding of how microbes behave on these vehicles can mean better control measures.” 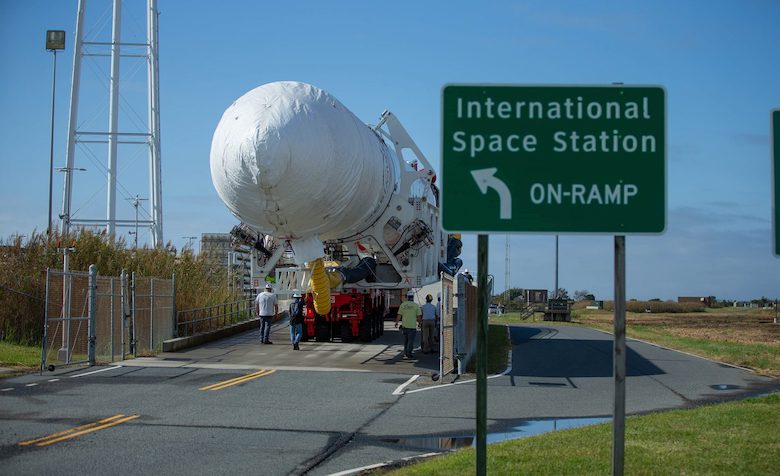 A Northrop Grumman Antares rocket carrying a Cygnus resupply spacecraft is transported to the launch pad at NASA’s Wallops Flight Facility in Virginia for its Oct. 2 launch to the International Space Station. Photo courtesy NASA/Patrick Black

With NASA eyeing sending humans back to the moon and then to Mars and deeper into space, understanding the mechanisms of bacterial growth in space could prove invaluable to maintaining both human and machine health aboard long-term spaceflights.

“I was elated when I learned of the funding Dr. Curtis received through NASA’s Flight Opportunity Award program and am very excited that the space-station phase of his research project has begun,” said Brice Noonan, acting chair and associate professor of biology.

“The cutting-edge genomic techniques and paired Earth/ISS design of Dr. Curtis’ project will yield unparalleled insight into the effects of microgravity and space travel on a diverse array of bacterial species that will lay the foundation for how bacterial growth is dealt with in space in the future.”

Curtis was awarded his ISS Flight Opportunity Award in 2019 and spent the last 12 months preparing the experiment for its journey in space.

“It’s kind of funny,” he said. “The experimental design is very basic: We are culturing bacteria. If we were to do this on Earth, we could’ve had the experiment done in a week. 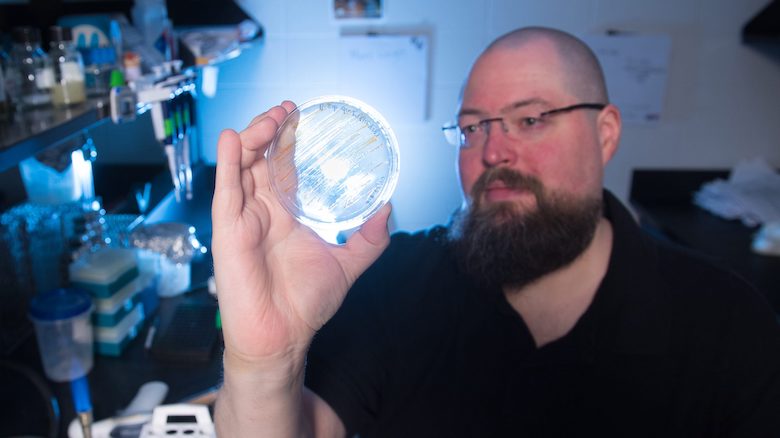 “But space complicates everything. All the tools and techniques we use on Earth don’t work in space, so we had to figure out very basic things.”

Some of the challenges faced by Curtis and his lab for the experiment to go forward included how to mix two fluids in space and do it sterilely, how to aerate samples and more.

“There has been a ton of work in the past year leading up to this moment,” Curtis said. “That’s why, when the moment arrived and we watched that rocket lift off with our samples, it was so meaningful.”

The four species of bacteria include a plant pathogen, a common aquatic microbe, a bacterium capable of degrading complex chemicals and a metabolically flexible bacterium that can live under a variety of conditions.

“When we examine these microbes for what is important to them living in microgravity, we can see what types of traits are universally important, as well as the types of traits that are more specific to each organism,” Curtis said. “Not a lot of work has been done with bacterial responses to microgravity. Some people don’t even think bacteria care about gravity.

“But the work that has been done show bacteria change how they live while aboard a spacecraft, and oftentimes those changes negatively impact the craft or the humans aboard it.

“We hope this will reveal all the genes or systems important for bacterial growth in space for a given organism, and by doing this for multiple different organisms, reveal universal aspects for microbial growth in space, if there are any.”

Curtis’ Flight Opportunity Award, No. 80NSSC19M0013, titled “Assessment of Whole Genome Fitness of Bacteria under Microgravity,” is funded for $100,000.

The UM-created, nano-reinforced materials sent to the ISS last year through a separate Flight Opportunity Award are a graphene-enhanced polymer and a nanostructured hybrid polymer. Graphene is a 2D form of carbon discovered in 2004 that has shown versatility and the potential to stimulate technological advancement in many industries.

The materials are attached to the outside of the space station, where they are being tested for their effectiveness to improve future spaceflight. They are expected to be returned to Earth in November.