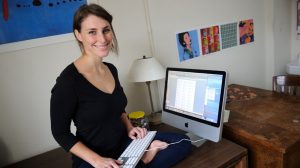 Rachel Smith, a 2012 graduate of the University of Mississippi Master of Fine Arts in Creative Writing program, has received an Elizabeth George Foundation fellowship, which will allow her to move to a mountain cabin to work on a collection of stories.

The Seattle native who lives in Oakland, California, with her husband, said the couple plans to move to the Cascade region of Washington so she can work on her stories in a peaceful, isolated setting. She thinks the spot will be perfect for writing.

The best part about the grant is that it gives her a chance to be there and just focus on her craft, something that is rare for a budding author, she said.

“It’s kind of a dream,” Smith said. “If you are a writer you just want time to focus on your book and that’s what I got. It doesn’t happen very often. It’s a very big gift, and I’m hugely excited about it.”

Her stories involve many different female protagonists and are set in years spanning from the early 1980s through the present. Many different cities provide the backdrop, and her tales are often connected by characters who may appear as major players in some stories and secondary characters in others.

Though Smith said she isn’t really focused on themes, complicated romantic relationships often are present in her writing.

“A lot of the characters are grappling with relationships or attractions that exist outside the boundaries of what is socially acceptable,” Smith said.

“I think we’ve probably all experienced emotions that we can’t act on without doing damage to our lives or relationships, and I’m interested in exploring those sorts of situations imaginatively. I want to present my characters with emotional obstacles to grapple with or surmount.”

The Elizabeth George Foundation, which is named for the New York Times bestselling author, makes artistic grants to unpublished fiction writers, poets and emerging playwrights, and also to organizations benefiting disadvantaged youth. Smith’s fellowship is worth $33,600.

She previously received a competitive two-year Wallace Stegner Fellowship for the Creative Writing Program at Stanford University, which she started in 2013. The university offers only 10 two-year fellowships each year, five in fiction and five in poetry.

That fellowship program is named after Stegner, a novelist and the creative writing program’s founder. Smith received a living stipend of $26,000, plus tuition and health insurance. She was the first graduate from UM’s MFA program to receive the fellowship at Stanford.

Smith also directed a documentary “MINUSTAH Steals Goats,” which deals with her time in Haiti. There, she was an outsider trying to understand a strange situation involving United Nations peacekeepers. The film was screened at the International Documentary Film Festival in Amsterdam in 2010 and was picked up by 7th Art Releasing.

Smith is one of the MFA program’s most talented recent graduates, said Ivo Kamps, professor and chair of the UM Department of English. Her thesis, written under the direction of famed authors Richard Ford and Tom Franklin, included a collection of short stories that Kamps called “superb.”

“Upon graduation (from UM), she traveled for a year in China and returned to the U.S. after obtaining a prestigious two-year Stegner Fellowship at Stanford University, where she worked with Tobias Wolff and Adam Johnson,” Kamps said. “Winning the Elizabeth George Foundation fellowship is only the most recent of Rachel’s impressive successes, and it will allow her to continue on her fiction uninterrupted.”

“Rachel is one of the best students we’ve had because she wasn’t afraid to admit what she didn’t know,” he said. “Add a dazzling talent to that openness and you’ve got something special, which she is.”

Smith said she won’t be satisfied unless she completes her book of stories by the end of the fellowship.

“It’s really a privilege to have received the grant,” Smith said. “It is great, as a reflection on the MFA program at Ole Miss that I have this opportunity, but as great as it is, I won’t consider something like this a success until I really have done something with it. Hopefully, I can report that I have a year from now.”