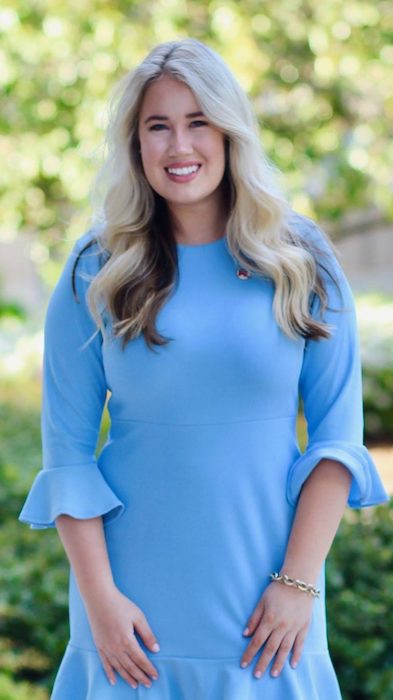 Kailyn Mae Mahoney, who is set to graduate officially from the University of Mississippi in August, is spending her summer behind the bright production lights on MSNBC’s “Morning Joe” talk show.

The Bakersfield, California, native with a major in political science landed an internship with the New York City-based television program that has been her favorite way to consume information during her college career.

“During the summer of 2017, I grew frustrated with the way the political table was set,” she said. “I knew I needed to make a change as to how I was ingesting the news and what media outlets I was choosing to listen to.

“I was eager to find a news source that provided viewpoints and commentary from those on both sides of the aisle.”

“The bipartisan banter quickly drew me in, and I became borderline obsessed with the show, frequently waking up at 6 a.m. Eastern time to watch.”

Her roommate joked that Mahoney should pursue a job there since she watched it so much. With encouragement from peers and professors, Mahoney applied, reached out to the show’s senior producer and landed her dream internship.

“If you would have told my 18-year-old self that I would graduate from Ole Miss, my dream school, with a political science degree and an internship like this, I wouldn’t have believed you,” she said. “I look forward to starting my career with MSNBC and can’t wait to see what the future holds.”

Throughout her internship, Mahoney arrives at work by 4 a.m. and completes a variety of tasks in preparation for the daily show, including making sure featured guests arrive on time and acting as a stagehand while the show is live. At the end of every show, she attends a staff meeting where the group evaluates what went well and what didn’t so it can make the next day’s broadcast even better.

“From this internship, I hope to act as a sponge and absorb as much information as I possibly can,” she said. “I’ll no longer just be watching the news; I’ll be witnessing how it’s produced firsthand.

“My long-term career goal is to become a talent booker for a political news show, so I’m hoping for an in-depth shadowing process of our booking producers’ day-to-day activities.”

Mahoney has always been interested in politics, which led her to choose political science as her major.

“Our world is ruled by political decisions, and I took great interest in learning what laws were being proposed, why we entered into war or how the Supreme Court decided on a specific case,” she said.

“She is a very energetic, charismatic and driven person, which proved useful in her being offered an internship with MSNBC,” said Skipworth, who served as Mahoney’s academic adviser.

Smith said he is quite proud of Mahoney’s achievements.

“Her excitement about working with the cast and crew of ‘Morning Joe’ offsets a sense of loss that I feel relative to her leaving Oxford, as she is a close friend and kindred spirit,” he said. “I look forward to following her career and could not be more confident that it will be a ringing success.”