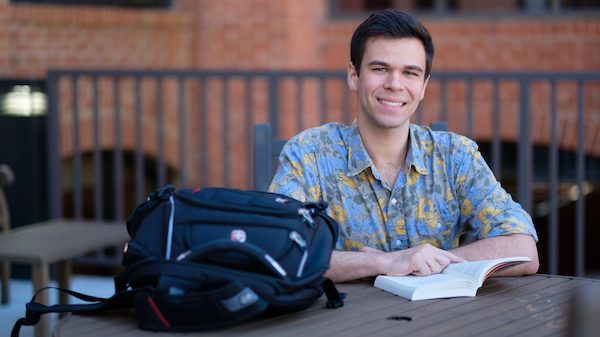 Jake Thrasher, a 2018 UM graduate and Hall of Fame inductee, won first place in the Society of Professional Journalists Mark of Excellence competition for his editorial cartoons in The Daily Mississippian. Photo by Robert Jordan/Ole Miss Digital Imaging Services

Many people have diverse interests, but to be highly skilled in several areas is a rarer quality.

Jake Thrasher, of Birmingham, Alabama, graduated from the University of Mississippi in May with a bachelor’s degree in chemistry, but he recently earned national honors in an entirely different field: editorial cartooning. He won first place in the Society of Professional Journalists’ Mark of Excellence competition.

Thrasher has always been interested in art. He attended high school at Shades Valley Visual Arts Academy, which gave students preparation for creative problem-solving in visual art for those interested in pursuing a creative career. He began working for The Daily Mississippian as a freshman at Ole Miss.

“I’d always created what would be considered fine art and I was always interested in making something meaningful,” he said.

While at a social event, an editor approached him to ask that he begin drawing editorial cartoons.

“I had never created cartoons before and I wasn’t big into politics, but I immediately fell in love with it,” he said.

It quickly became more than just art for Thrasher and developed meaning.

“I realized early on as an editorial cartoonist that I’d been given a position that gave me a platform to speak out,” he said. “It would be irresponsible of me to not use that platform to change the state, the nation and our campus for the better.”

Thrasher drew his inspiration from political and social issues. He created two or three originals cartoons each week for The Daily Mississippian during his undergraduate career.

“I tried to stay constantly up to date politically, socially and on current campus issues,” he said.

Each cartoon took Thrasher a minimum of four to five hours to complete for a more simplistic drawing, or up to eight or 10 hours for a detailed drawing that involved the use of watercolor and other elements.

Patricia Thompson, assistant dean for student media at the Meek School of Journalism and New Media, said Thrasher’s work for The Daily Mississippian has been “nothing short of stunning.”

“The quality of his editorial cartoons rivals that from top professionals,” she said. “He has the ability to zone in on important issues and capture the essence of his opinion in artistic ways. His illustrations gracing the DM’s pages were creative, eye-catching and beautifully drawn.”

Thompson said he also went above and beyond his role by hiring and helping develop the skills of younger cartoonists and staying involved with student media.

“He wasn’t required to attend daily news meetings, but he often did so to learn what stories the staff was pursuing so he could make his work more timely and relevant,” she said.

Thrasher submitted three drawings to the competition, and the one featured on the SPJ website is titled “GOP Operation,” which is a satire of the children’s board game that also combines several issues.

“I’d have to say that was one of my favorites,” he said. “I spent a long time on that cartoon and it was one of my last drawings for the DM during my fall semester. I was happy to see it featured.”

Thrasher has a passion for helping others, and he served as president of Rebels Against Sexual Assault during his undergraduate career. He plans to attend Yale University this fall to pursue a doctorate in biology and biological sciences while conducting cancer and HIV research.

This spring, he was among 10 students inducted into the university’s 2017-18 Hall of Fame, one of the highest honors afforded Ole Miss students. He was also a member of the Sally McDonnell Barksdale Honors College.

“Jake exemplifies what it means to be citizen scholar for the Sally McDonnell Barksdale Honors College,” Dean Douglas Sullivan-González said. “He took the challenges and the risks to explore both the arts and the sciences during his tenure, and these national awards represent an acknowledgement of his great risks to live the answers to the tough questions of the day. We are proud of Jake.”