Annual event to draw hundreds from around globe to Oxford, region 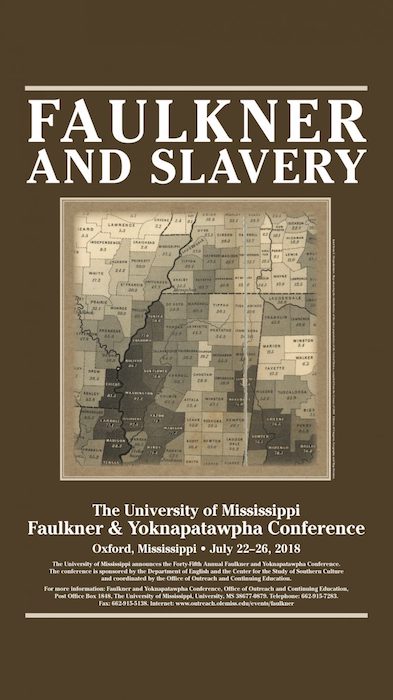 “Faulkner and Slavery” is the theme for the University of Mississippi’s 45th annual Faulkner and Yoknapatawpha Conference, coming up July 22-26.

Five days of lectures, panels, tours, exhibits and other presentations will take up the question, “What did slavery mean in the life, ancestry, environment, imagination and career of William Faulkner?” Besides four keynote lectures, the conference program will include panel presentations, guided daylong tours of north Mississippi and the Delta, and sessions on “Teaching Faulkner.”

Speakers include Edward Baptist of Cornell University, a distinguished historian of slavery and American capitalism addressing Faulkner’s work for the first time; John T. Matthews of Boston University, a renowned Faulkner scholar; Tim Armstrong, author of a book on the logic of American slavery in 19th-century literature; and Stephen M. Best, a scholar of 19th-century African-American literature and law who has traced how the legal dilemmas surrounding the enslaved person have informed American law, literature and popular culture throughout the 19th and 20th centuries.

“Obviously, the South that Faulkner writes about, even in his novels and stories of the 20th century, is to a significant degree a product of African slavery,” said Jay Watson, Howry Professor of Faulkner Studies and Professor of English who serves as conference director. “What makes this topic even more timely than it would ordinarily be, however, is that this August marks the beginning of the 400th year since African slavery was introduced into the English-speaking colonies of North America.”

“There will be a session on the history of slavery at the Robert Sheegog residence (also known as Rowan Oak) featuring architectural historians and archaeologists who have extensively researched and studied the site,” he said. “Another session will focus on the history of slavery at the University of Mississippi, which is, of course, an important setting in several Faulkner novels and loomed large in his local world.

“A third session will provide deep background on histories of slavery in Oxford, Lafayette County and north Mississippi. Our hope is that these sessions will give our audience deeper insight into the actual legacies of slavery that Faulkner grappled with in transforming his north Mississippi environment into art.”

A new guided tour is also being offered. Led by Jodi Skipper, UM associate professor of anthropology, this tour focuses on the “Behind the Big House” project, which is a research and continuing education-oriented program that focuses on slave quarters and other structures where slaves lived and worked in Holly Springs.

The conference begin at 1 p.m. Sunday (July 22) with a reception at the University Museum, after which the academic program will open with two keynote addresses, followed by a buffet supper on the grounds of Rowan Oak. Over the next four days, a busy schedule of lectures and panels also includes an afternoon cocktail reception, a picnic at Rowan Oak, guided tours and a closing party on the afternoon of July 26.

Throughout the conference, the university’s J.D. Williams Library will display Faulkner books, manuscripts, photographs and memorabilia. The University Press of Mississippi will exhibit Faulkner books published by university presses throughout the United States, and collaborators on the Digital Yoknapatawpha Project, a database and digital mapping project at the University of Virginia, will present updates on its progress at a special conference session.

To register or for more information, visit http://www.outreach.olemiss.edu/events/faulkner/.