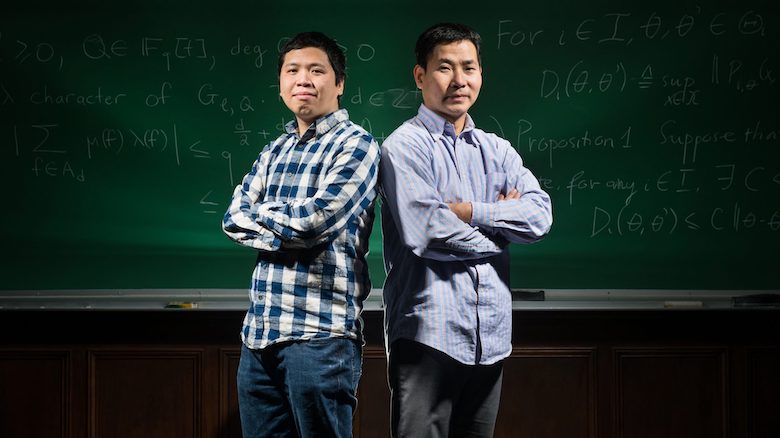 One of the first known uses of mathematics was 37,000 years ago when someone in the Lebombo Mountains between South Africa and Swaziland carved 29 marks into a bone from a baboon’s thigh to count something. Ancient Babylonians, Egyptians, Romans and Greeks also made advancements to the science of math, many of which remain in use today.

Though it’s been around for tens of thousands of years and is a cornerstone of education, science and engineering, math still vexes many of us. But for others, the subject is a passion – a lifelong puzzle they are constantly working.

Meet Dao Nguyen and Thái Hoàng Lê, both assistant professors of mathematics at the University of Mississippi. Not only do they like complicated problems, they were among the world’s best at solving them as high school students in Vietnam in the 1990s.

The two won gold medals in the International Mathematical Olympiad. Only six students are selected from each participating country, so just getting there requires winning school, city and nationwide competitions.

The professors admit the prospect of spending two full days competing against the world’s best mathletes isn’t for the faint of heart.

“It’s grueling, but we do it because we like it,” said Lê, who first represented Vietnam in the event in 1998 and won gold in Romania 1999 as a high school student. “I just like mathematics, so I really enjoyed it. I like the logic in it. Everything is very logical and precise. Everything is clear-cut. It is either right or it is wrong. There is no in-between.”

“Logical thinking is different from real life. Real life is much more complicated.”

The International Mathematical Olympiad, which is for high school students, is held annually in a different country. Since the first IMO in 1959 in Romania, with only seven countries participating, the event has expanded to more than 100 countries from five continents.

The event is rigorous. Last year, competitors just barely old enough to drive were asked to solve this problem, among others:

“1. Let Γ be the circumcircle of acute-angled triangle ABC. Points D and E lie on segments AB and AC, respectively, such that AD = AE. The perpendicular bisectors of BD and CE intersect the minor arcs AB and AC of Γ at points F and G, respectively. Prove that the lines DE and FG are parallel (or are the same line).”

Though the problems are incredibly difficult, Nguyen, who won gold in 1992 in Moscow as part of the Vietnam team, doesn’t remember feeling stress during the competition all those years ago. Like many who are good at what they do, he has a quiet confidence about him.

“We had a lot of talented students from other countries, but there was no pressure,” Nguyen said with a grin. “I like a challenge.”

He said it’s the almost never-ending puzzle math provides that keeps him interested.

“Basically, it’s an instinct,” Nguyen said. “You do a lot of homework. The logic is very important. From one clue, we can infer it to another and figure out how something should look. Then you can do more.

“When you study for something and you can do it, you just want to do more.”

Math is a skill someone improves throughout his or her life to reach higher levels of difficulty. It takes many hours of work to be good enough for the Olympiad. Movies often get this part wrong, Lê said.

“Good Will Hunting” features an iconic portrayal of complicated ciphering. Matt Damon, who plays a janitor, is caught by a professor solving an extremely complex problem on a chalkboard that no one had been able to work.

“That movie is not realistic,” Lê said with a laugh. “That guy doesn’t do anything right. He is just hanging around. He is just good at math. It doesn’t work like that. You have to spend hours and hours. 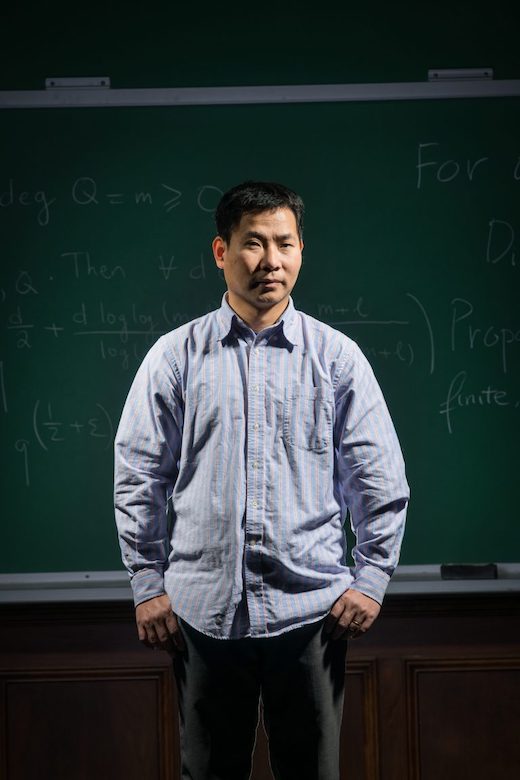 UM assistant professor of mathematics Dao Nguyen holds a gold medal in International Math Olympiad, which he won as a high school student on the Vietnam team in 1992. Photo by Megan Wolfe

“It’s like how Michael Phelps swims so well because he practices so much. He wasn’t born like that; I mean, unless he is a fish. He has to practice very hard.”

It’s extremely uncommon to have two professors in the same department who have won the math Olympics, much less two from the same country on the other side of the planet.

UM is fortunate to have the two on faculty, said James Reid, professor and chair of the Department of Mathematics.

“The students of the university have an opportunity to learn from two extraordinarily gifted mathematicians,” Reid said. “The mathematical promise exhibited by these scholars in their youth has come to fruition in the present as Drs. Nguyen and Lê are researchers in the cutting-edge research areas of number theory and computational statistics.”

Another unlikely part of their story is that Lê knew who Nguyen was before meeting him at Ole Miss because of Nguyen’s success in the Olympiad six years before him. The two friends didn’t meet, however, until they were both working at UM.

Nguyen didn’t go straight into teaching. He was graduating college just as the tech boom began in the mid-1990s, and he went into the computer science field. He earned a doctorate from the University of Michigan in 2016. In 2017, he put his passion for statistics to work in the classroom at Ole Miss.

“Teaching is great,” Nguyen said. “When you know something, you just want to disseminate your knowledge. The students are eager for knowledge. If I can inspire them, then that’s great.”

With so much success, it would seem that students might be intimidated to take classes from Lê and Nguyen. But, the lesson from the story of Nguyen and Lê is that math is tricky for everyone, even two gold medal winners, and it takes work to become a great mathematician.

“I want to impart knowledge to these students,” Lê said. “There are things I also had trouble learning, so I try to put myself in their shoes and try to help them get through the process that I had to get through.”