Bethany Fitts and Gabrielle Schust each given $5,000 to fulfill dream projects 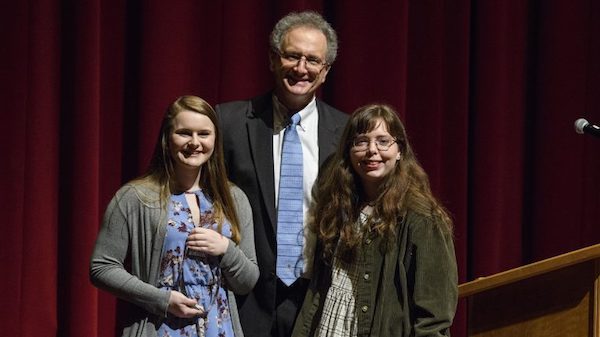 With $5,000 awards to support separate creative projects, two students in the Sally McDonnell Barksdale Honors College at the University of Mississippi have been named 2018 Barksdale Award winners.

Bethany Fitts, a junior English and history major from Tupelo, and Gabrielle Schust, a junior international studies and Spanish major from Columbia, Missouri, were presented the awards during the Honors College’s annual spring convocation Tuesday (Feb. 20).

The Barksdale Awards were established in 2005 to encourage students to test themselves in environments beyond the classroom, teaching lab or library. Fitts and Schust are the 23rd and 24th recipients of the honor.

“Our Barksdale Award winners have proposed tasks that will help them help us push our understanding of being human and being in this world,” said Douglas Sullivan-González, dean of the Honors College. “Bethany and Gabrielle are each taking on both a troubled past and a troubled present, seeking the connections that give hope and ways forward. I am proud that the Barksdale Award can fund such visions.”

Fitts will spend time in Washington state and in Hawaii, gaining ground-level experience with several kindred topics: poetry publication, conservation and W.S. Merwin, two-time winner of the Pulitzer Prize for poetry and a founder of a conservancy housing more than 400 species of endangered palm trees.

In Washington, with the well-respected Copper Canyon Press, she will gain hands-on experience with everything about poetry publication, from helping to organize community events to editing and marketing. At the Merwin Conservancy in Maui, Fitts will work in its education program and alongside the conservancy’s gardener. As a follow-up, she hopes to promote similar poetry/ecology work in all 50 states and to write her own collection of poems drawn from her experiences.

“As a writer and lover of words, I have always been curious about the ways in which literature, particularly poetry, intersects with real people and the world’s concerns,” said Fitts, who expects to graduate in May 2020. “Many people view poetry as separate from the world, and while this view does not necessarily diminish poetry’s value, I simply think that it is wrong. I think that, now more than ever, our country and our world must wake up to the political, social and environmental concerns that we have allowed to develop, and one way to engage with this waking process is poetry.”

Fitts serves as editorial assistant for the Ole Miss Alumni Review and as creative content editor for the undergraduate Populi Magazine. Last year, she won the English department’s Campbell Award. Fitts volunteers with Mississippi Votes and, last summer, was an intern with the Sunflower County Freedom Project, where she taught literacy, gardening and creative writing to students. Her questions have to do with the poet’s role in today’s chaotic society, and her own identity as a poet in that world and in Mississippi as it exists today.

“Bethany is a student of particular academic gifts, but her truly distinguishing quality is the depth and energy of her commitment to an interdisciplinary life of the mind,” Stout wrote in a letter of recommendation. “She is the true model of the citizen scholar, interested in how literature helps people interact with their surroundings, in literature as a form of social enrichment.”

Schust will travel to England to collect oral histories of older women in religious orders whose charitable works in the 1960s and early 1970s (pre-National Health Service) focused on medical care for the poor, especially for women or children. She has already contacted three such orders and arranged interviews with eight sisters, the eldest of whom is now 103.

By collecting their stories, Schust hopes to gain insights into any changes over the past 70 years in how women in religious life had provided social services for the poor. She plans to capture the interviews on camera and create a mini-documentary, so that there will be a “window into the world of these women and the communities in which they worked.”

During an academic year in Lima, Peru, next year, Schust will conduct research into similar work being conducted in the Andes by women in religious orders.

The statistics about poverty, maternal/fetal mortality rates and life expectancy in today’s Andes and England before the National Health Service are “striking,” Schust said. She hopes to determine how today’s efforts compare and provide an assessment for how the Andean practices might be improved upon.

Schust has volunteered as an ACT Prep Class instructor and with the Oxford Film Festival, as well as for various local and national political campaigns. She is a member of Model UN and involved with UM’s Ghostlight Repertory Theatre and participates in youth and community theatre at home in Missouri.

Schust spent a summer in Bolivia in the field school of Kate Centellas, Croft associate professor of sociology and anthropology.

“I remember Gabrielle sitting and talking with her host family for hours, as she heard their stories and learned more about them and their perspectives,” Centellas said. “That time helped her understand the power of oral histories in the context of social science research. Her project is timely and innovative, and it needs doing.”