University leaders reflect on 50th anniversary of arrests, recognize more must be done to heal wounds 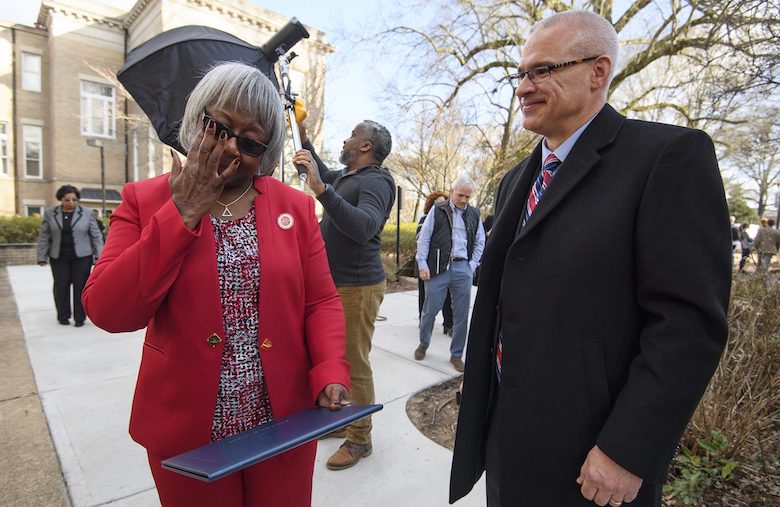 Linnie Liggins (left) reacts to finally receiving the University of Mississippi diploma she earned 50 years after completing her coursework. Provost Noel Wilkin apologized earlier in the day that the university neglected to recognize her accomplishments for so long and said he was ready to present her diploma whenever she was ready, on her terms. Photo by Thomas Graning/Ole Miss Digital Imaging Services

In a series of events intended to remember, reckon and repair, the University of Mississippi welcomed back many of the black students who were arrested on campus 50 years ago during one of the most challenging moments in the university’s history.

On Feb. 25, 1970, more than 60 students from the Black Student Union staged a nonviolent protest objecting to their treatment on campus by marching to Fulton Chapel, where the international music revue Up with People was performing. The group invited the protesters onto the stage, where the protesters gave the Black Power salute while Up with People sang, “What Color Is God’s Skin?”

When the protesters left the building, they were arrested, along with other black students elsewhere on campus.

During a Tuesday luncheon honoring those students, many of whom returned to campus for the first time in 50 years, Provost Noel Wilkin expressed regret on behalf of the university for the way in which the students were treated.

During a Monday night (Feb. 24) panel discussion at Fulton Chapel, Linnie Willis captured a sentiment that seemed to be held by most of the returning students.

“As I look at the diversity of the audience here tonight, I know Ole Miss has made quite a bit of progress, but there is still work to be done, I’m sure,” said Willis, who was jailed and subsequently expelled following the protest. “It’s a much friendlier audience – friendlier faces.” 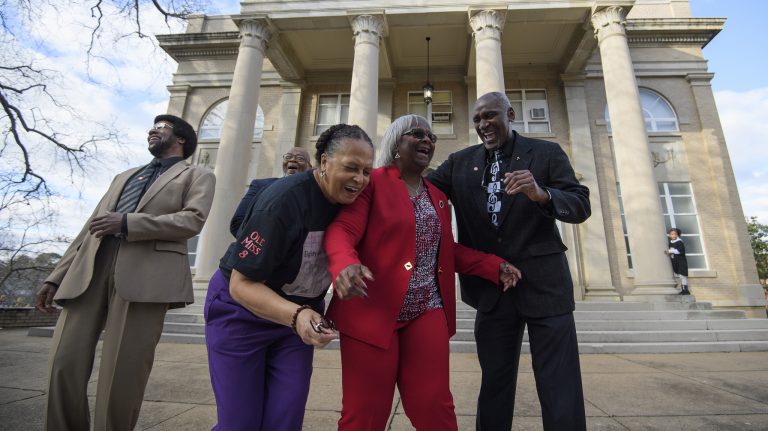 The luncheon and panel were part of a larger program titled “Black Power at Ole Miss,” which was designed to “remember and honor the activism and sacrifice of black students, reckon with the harm and trauma caused by the actions of the university and federal and state law enforcement and seek reparative solutions grounded in truth-telling and justice,” according to the organizers.

The events were sponsored by the Arch Dalrymple III Department of History and the Center for the Study of Southern Culture, with support from the Division of Diversity and Community Engagement and the Office of the Provost.

Recognition Withheld but Not Forgotten

At the time of her expulsion, Willis was months away from graduation. While she completed the coursework for her bachelor’s degree, she never received her diploma.

Willis said she moved away from Oxford, her hometown, because the suspension was a black mark on her reputation, leaving her unemployable.

During Wilkin’s apology, the provost announced he had her diploma and was ready to present it on her terms. The roomful of returning students, as well as current students, faculty, staff and community members, rose to their feet and applauded.

“Today I’m still getting past the anger, and I’ll be very honest with you, it took a lot for me to come back today,” said Willis, who made regular trips back to Oxford to visit family, but didn’t set foot on the university campus again until this week. “The fact that my grandmother is no longer with us and she did not have an opportunity to see me walk across the stage is something that will always be with me.”

Willis finally received her diploma Tuesday during a commemorative ceremony outside Fulton Chapel, on the very steps where she and her classmates were arrested 50 years earlier.

Donald Cole, one of the students expelled from the university, returned more than 25 years ago and served as an associate professor of mathematics, a member of the chancellor’s executive staff, assistant to the chancellor for multicultural affairs and, most recently, as assistant provost before retiring in 2018. He was inducted into the Ole Miss Alumni Hall of Fame in 2019.

Cole was visibly pleased to see his friends and classmates, many of whom he hadn’t seen in decades, return to campus after so many years away.

“I was one of the ones who came back,” he said. “And of course, I came back without some of the people that I had left. For years, I’ve been one of the ones sharing parts of their stories. To have them back on campus now is just a delight.”

“I want to thank all of the individuals who came back,” Cole said. “You didn’t have to. But we’re not through with you. Coming back one time – we can’t apologize enough. So we’re going to continue to work toward that end.

A Return to Where it Began

As the events of “Black Power at Ole Miss” came to a close Tuesday afternoon, returning alumni, administration, faculty, staff and students gathered at the steps of Fulton Chapel.

“I thought it was important for us to be in this space on the anniversary of the arrests,” said Garrett Felber, UM assistant professor of history, who spearheaded the planning efforts.

After the protesters were arrested, law enforcement officials continued to round up black students, arresting 89 in total. Some were sent to the Lafayette County jail in Oxford. Others were bused to the state’s most infamous prison, the Mississippi State Penitentiary, commonly known as Parchman Farm. 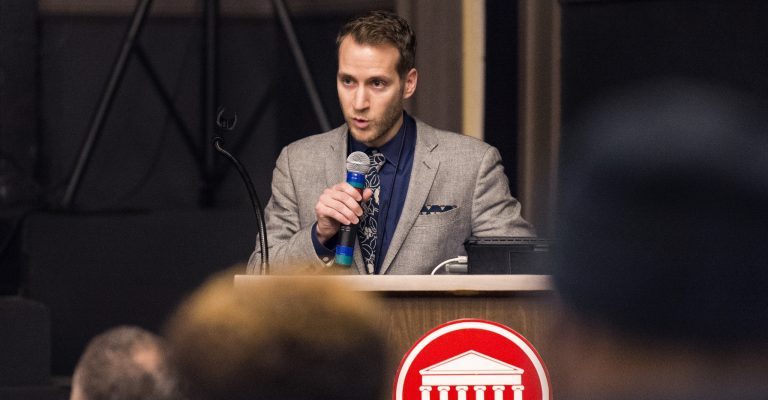 Garrett Felber, a UM assistant professor of history who spearheaded planning efforts for the ‘Black Power at Ole Miss’ events, reads the demands black students made of the university in 1970, most of which have been met, noting some still haven’t. Photo by Christian Johnson/ Ole Miss Digital Imaging Services

“We remember what happened that evening,” said retired Maj. Gen. James E. Donald, who also was later inducted into the Alumni Hall of Fame. “It did not derive from some special strategic plan. It was not devised as a conspiracy by somebody, as it would be suggested.

“We were sort of like you. We were young, 18, 19, 20 years old. We were all a little upset after visiting our chancellor and presenting what we thought were very reasonable demands, demands that in the subsequent years have created a beautiful menagerie of leadership around the campus.”

A Legacy of Progress

When the arrested students left the university, they left a list of 27 demands in their wake. BSU President Arielle Hudson said she wanted to honor the legacy of those demands and the returning alumni by sharing the progress the university has made.

“I thought about talking about all the things the university still needs to do to truly be a place for people like us, but then I realized for many of you, this is your first time back in Oxford, Mississippi, and at the University of Mississippi in 50 years,” said Hudson, who was named late last year as UM’s 27th Rhodes Scholar and the university’s first African American female selected for the prestigious international scholarship program.

“So, what better way to honor you than to describe to you some of the fruits of your labor and your sacrifices?”

Hudson described the many ways in which the demands have been met, including the hiring of black police officers and appointment of a black police chief; establishment of the African American studies program; employment of black instructors in all schools and graduate assistantships for black students in most departments; significant black representation on the Associated Student Body; specific scholarship programs for black and minority students; appointment of black deans, clerks, secretaries, coaches, recruiters and counselors; significant recruitment of black athletes; and the removal of the state and Confederate flags from campus.

“We cannot thank you enough for your sacrifice, for your grace and for the example that you set for people still struggling to be treated equitably in our institutions,” said Katrina Caldwell, vice chancellor for diversity and community engagement.

“Your stories are gifts to us and the next generation coming after us. Your memories are precious and we hope to treat them better moving forward. … We hope to walk in the promise, the example of justice that you set for us.”

Everyone Has a Part

During the remembrance on the Fulton Chapel steps, Cole told the story of three white students who blocked his path to class one morning decades ago, forcing him to walk through the mud to step around them. He said those students didn’t anger him.

“I think the sad part of that story was the bystanders, the observers, those who did nothing,” Cole said.

As they shared personal remembrances and observed how things have changed for the better, each returning student took care to point out that progress only happens when good people continue to fight for the fair and equitable treatment of everyone.

The commemorative events from Black Power at Ole Miss: Remembrance and Repair at 50 Years are available on eGrove, an institutional repository providing free online access to the intellectual output of researchers at the university and promoting its dissemination in an archive. Black Power content includes photos, a staged reading, a documentary, oral histories, and more. See https://egrove.olemiss.edu/blkpower/.