The University Is Part of the Family 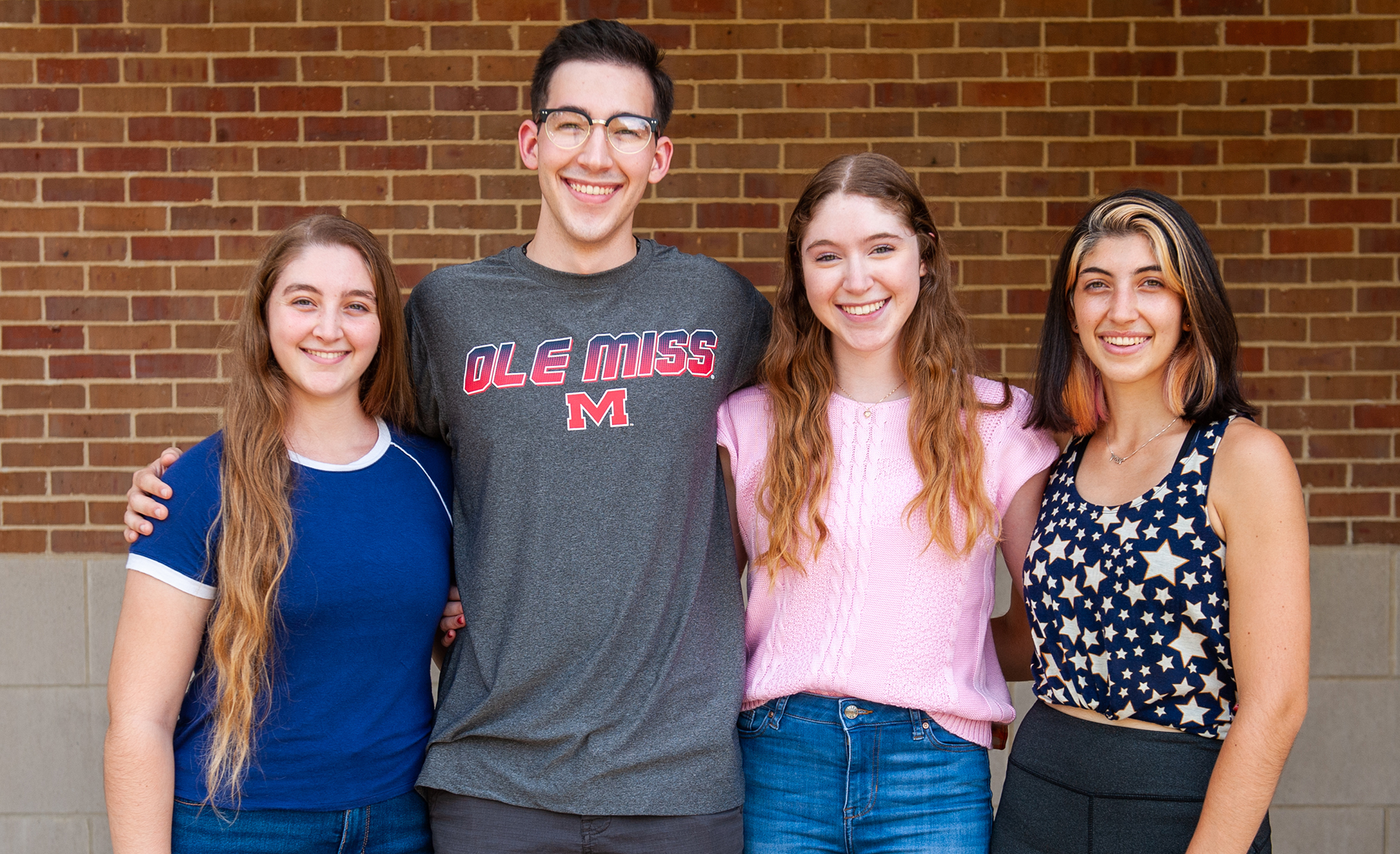 For the Goulet siblings, the university is a family affair. Yazmin (left), Yaniv, Gabrielle and Nicole Goulet all were enrolled in the university and its Sally McDonnell Barksdale Honors College during the fall 2021 semester. Photo by Bill Dabney/UM Foundation

Yazmin Goulet’s transcript shows she stayed at the University of Mississippi an extra semester to add a minor to her already impressive resume, but the real reason is this: It’s not every day you get to go to college with three of your siblings.

“It’s like the university is part of our family, and we’re comfortable here,” said Yazmin, a senior from Oxford who graduated in December with bachelor’s degrees in integrated marketing communications from the School of Journalism and New Media and in art from the College of Liberal Arts, plus a minor in general business.

“For me, going to college with my siblings wasn’t like, ‘Ugh, I have to see my sister,’ but instead I was looking forward to band at the end of the day because they’re all there.” 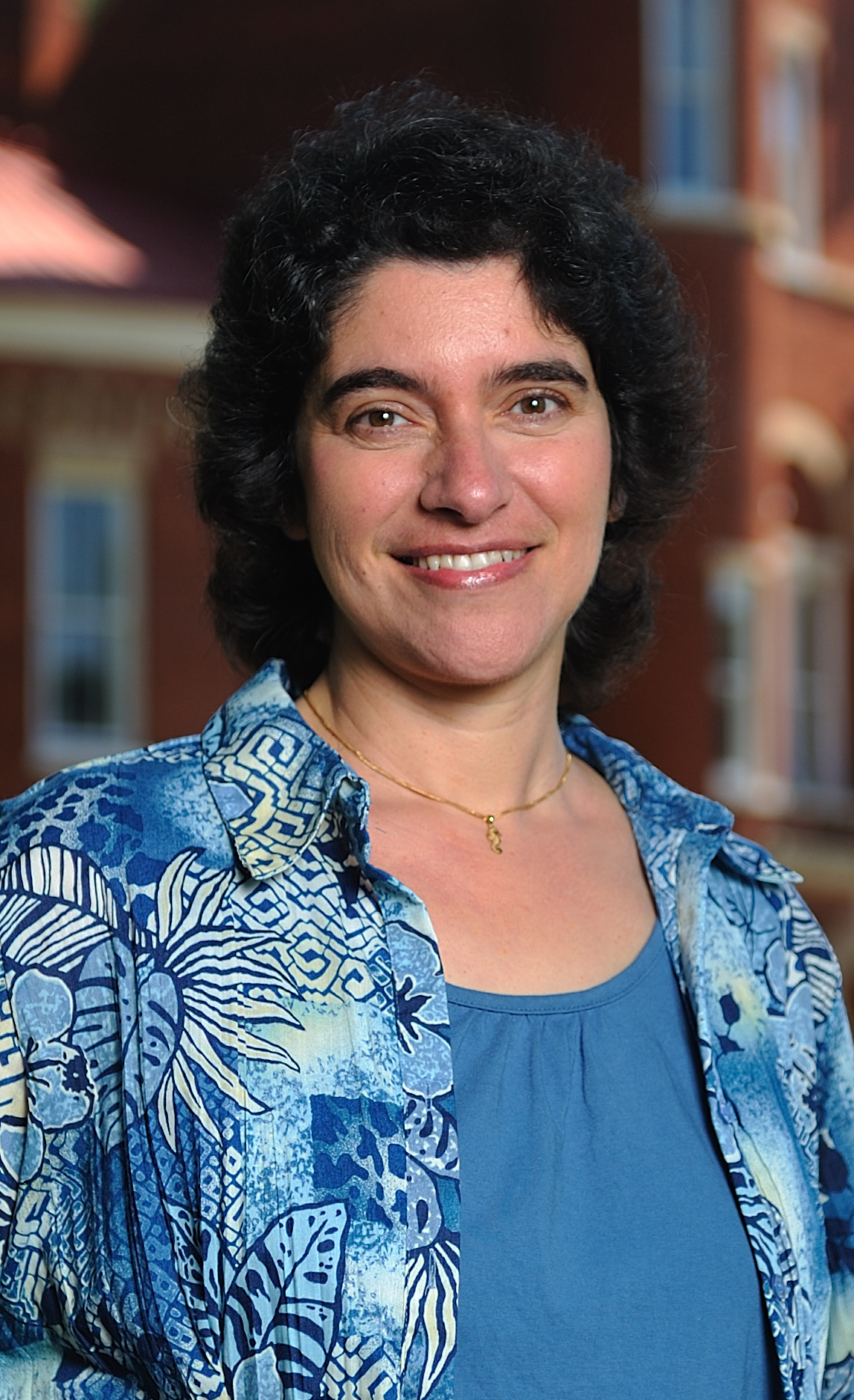 And while they were in class, their parents were teaching class. Denis and Tamar Goulet are mainstays in the UM Department of Biology.Yazmin is the oldest of five, including brother Yaniv and sisters Gabrielle, Yaniv’s twin, and Nicole, “Tozie” to friends and family, all of whom were enrolled at UM during the fall semester.

All three girls were in the Pride of the South marching band‘s color guard, with Yazmin as captain. Yaniv studied abroad at Maynooth University near Dublin, Ireland, in the fall, but he marched playing tuba his freshman and sophomore years.

All four were in the Sally McDonnell Barksdale Honors College as well.

A Family in Harmony

Mel Morse, director of band programs for the Oxford School District for several years, was named Ole Miss assistant director of bands in fall 2021, so he’s spent more time with the Goulets than any other teacher. That also includes the youngest, Gilad, who is still at Oxford High School.

Morse said the thing that defines the Goulets is their wholeness.

“They’re wonderful people, first and foremost,” Morse said. “Dr. Goulet and Dr. Goulet did an incredible job raising them. They’re smart and social, with a strong sense of self – and not every student comes to college as complete as that.

“When you see someone who has both ability and drive, that turns into excellence quickly.”

Despite the siblings’ high levels of drive and achievement, Morse said he never saw one’s achievements turn into pressure to achieve for another.

“Even though all of them were such high achievers, I never saw the negative side of ‘You’re not as good as your sibling,’” he said. “They very much worked to be the best version of themselves each day.

“The drive they had was probably 25% parental, but the other 75% was them pushing themselves to be better – kid to kid, student to student and for themselves in their own lane.” 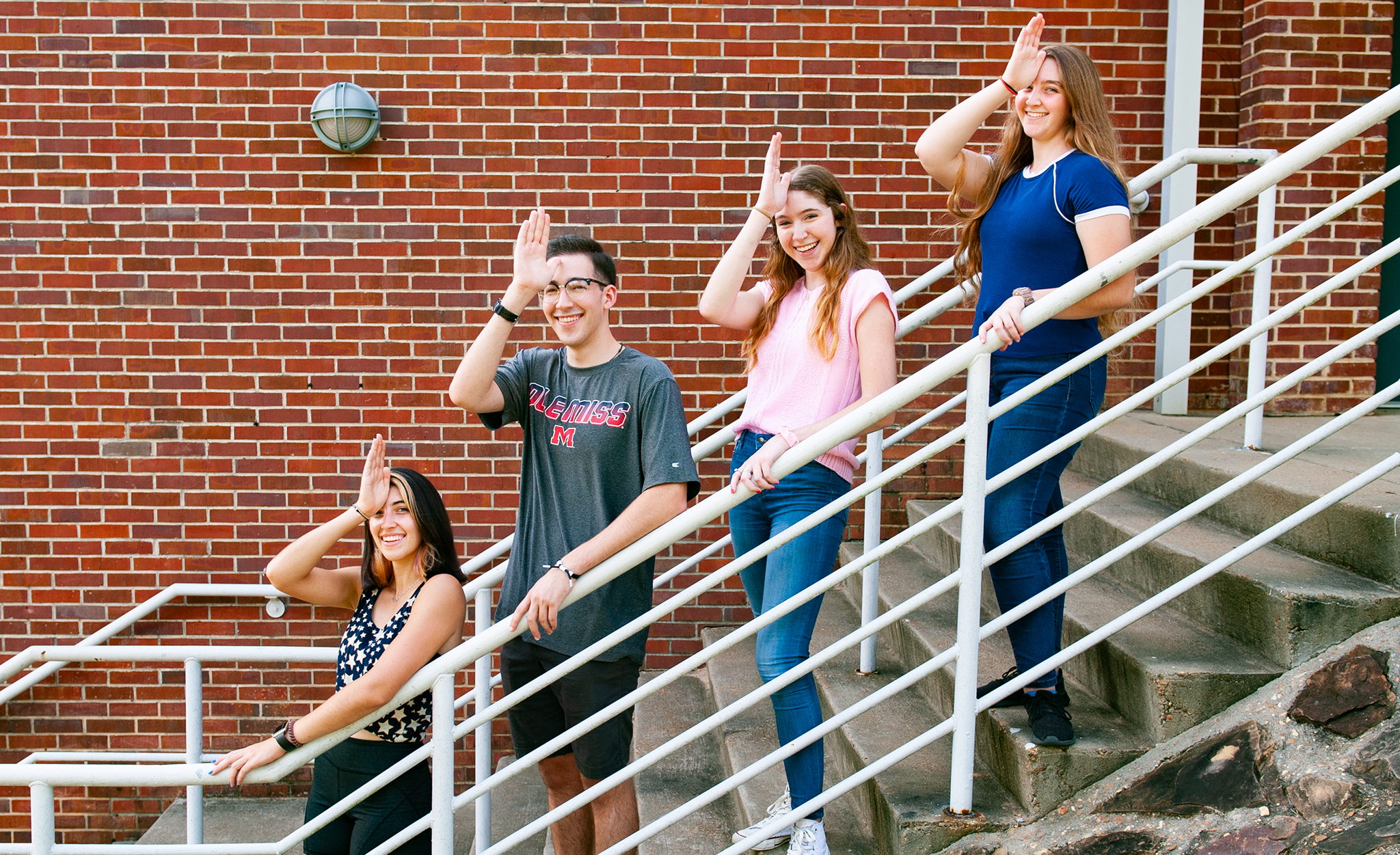 Nicole (left), Yaniv, Gabrielle and Yazmin Goulet gather outside the Ole Miss Band Hall before band practice. The four sibling all have marched in the Oxford High School Charger band and the Pride of the South marching band. Yazmin enrolled for an extra semester to pursue a minor and for the opportunity to experience band with her younger sisters. Photo by Bill Dabney/UM Foundation

But with him studying abroad in Ireland most of the fall, his sisters had to fend for themselves.The four are clearly independent, each pursuing separate majors, interests and even instruments in band, but they remain incredibly close. Most weeks, they meet up to watch a Netflix series and share a meal – usually cooked by Yaniv.

“Before I left for Ireland, I had more free time, so I’d text our group chat, ‘I’m free until 1 and sitting in the Grove,’” said Yaniv, a junior mechanical engineering major with a minor in mathematics.

“So Gabie would show up and then tell her friends, who would come. And I’d invite some of my own friends. Tozie and Yazmin might come by and bring their own friends. That’s one thing I’ll miss, just being able to see them on a whim.”

A Sense of Place

That sense of place and community is why each of the four decided to pursue their undergraduate degrees at home.

“Being from Oxford, there are great scholarships, I can do my laundry at home and my mom is always giving me food,” said Nicole, a computer science major, in the School of Engineering, with a minor in mathematics.

“Plus, I have my dog and since I don’t know where Yazie is going next, I get a year in band with my big sister and also my other siblings.”

Nicole said watching her three older siblings find their way through undergrad has given her a head start.

“Being a younger sibling, it’s nice to see their perspective,” she said. “I wasn’t as afraid going into college because I had been hearing about classes, dorms, meal plans and majors.

“And it’s nice having a support system. I can go to them for anything, whether it’s school or not.” 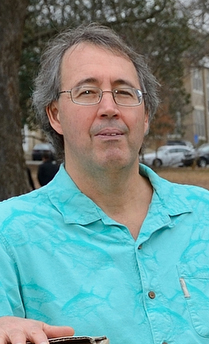 “Because I came in undecided, I wanted to go to a place I was familiar with socially and geographically,” she said. “My mom encouraged me to get my general education classes, so I took Spanish and found out about the Croft Institute.” Gabrielle enrolled at Ole Miss to give her a stable launching pad for whatever is next.

Gabrielle is a junior pursuing two degrees, in Spanish and international studies, and will be studying abroad in Uruguay during the spring semester.

“They’ve accomplished so much, so sometimes it’s difficult to talk about how proud I am without talking about all of their achievements,” said Tamar Goulet, a professor of biology. “But I am proud of them simply because they are my children.

“And now that they’re becoming adults, they’re such a delight to be around.”

Denis Goulet, an instructional professor and coordinator of biology labs, said having them on campus has given him an opportunity to watch them grow and mature into young adults. But it’s the unplanned and unexpected moments on campus that he cherishes.

“What makes me smile the most is when the kids stop by my office for a visit, bring me lunch or take me to lunch,” he said. “It reiterates to me that I am still a part of their lives.”