November 13, 2017  By Michaela Watson for The Daily Mississippian 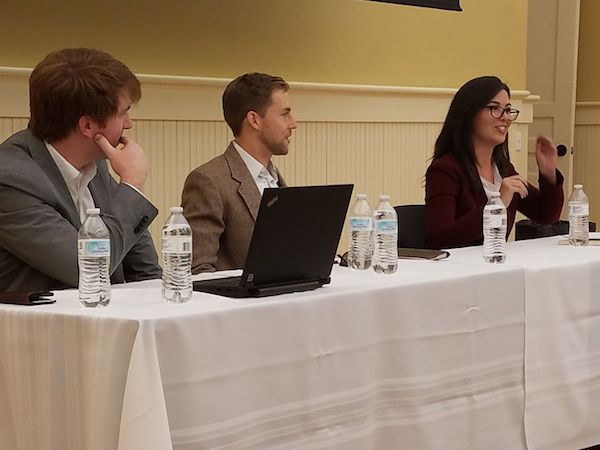 “Describe your dream. Don’t prescribe it,” alumnus Patrick Dogan told students at a panel event hosted by the Croft Institute for International Studies on Friday. “Pursuing your dream is like a game of chess, it’s not like dominos, where everything happens in a perfect order. Being able to have the big picture and knowing what you want are important.”

Catherine Couper, Patrick Dogan and Joel Fyke, all UM alumni with degrees in international studies, spoke to a crowd of undergraduate students in the Croft building Friday afternoon. The graduates advised students on making the most of their undergraduate degrees and pursuing jobs they want after graduation.

The Croft Institute for International Studies will celebrate its 20th anniversary next year, and Friday’s event was the second of its kind under director Oliver Dinius’ leadership.

Sophomore international studies major Gabrielle Schust said she chose to attend to understand what Couper did during her time as an undergraduate that made her successful, so she can take similar steps to achieve her goals.

Couper spoke about uncertainty after graduation.

“I didn’t have much of an exit strategy after college, and even if I had, it probably would have fallen apart,” Couper said. “I felt like I missed the boat, that everyone is doing incredible things.”

Couper had enrolled in a Spanish graduate program at Ole Miss, later earned her master’s in public health and now works in emergency management at the Centers for Disease Control and Prevention.

Directly following the panel discussion, the alumni met with small groups of students to conduct breakout sessions, which allowed for more personal conversations.

“If you don’t get the job, talk to the person who just rejected you and ask them where you should go and get some experience before you can come back,” 2005 graduate Joel Fyke said.

A recipient of the Truman Scholarship, Fyke began his career in a small newspaper and now works as an associate at the Forman Watkins and Krutz law firm in Jackson.

Fyke, Couper and Dogan all stressed the importance of networking and participating in informational interviews, like formal meetings between someone interested in working in a certain field and a professional in that field.

Couper said networking is essential, and how she landed the job she has now. She also said it’s important to always be ready, especially with an up-to-date resume.

Dogan agreed that an up-to-date resume is key for recent grads looking to showcase their skills.

“Set yourself up for success and reach out to alumni and use the university system,” he said.

Couper encouraged the students to use their work ethic to their advantage when applying for jobs.

“Ole Miss students have a reputation for being folks that are willing to just get the job done,” Couper said. “That I have seen externally. They don’t consider themselves entitled or above any sort of task, and they just put in the grease and get the job done.”