April 23, 2015  |  by Zoe McDonald
Courtesy of The Daily Mississippian 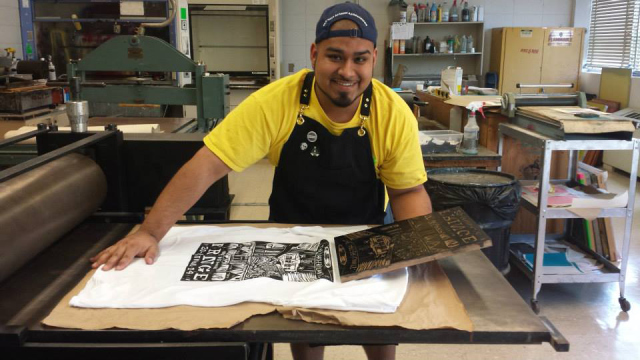 Frank Estrada in his print shop. | Photo courtesy of Estrada

Memphis native Frank Estrada would not have believed you if you had told him in high school he would become an artist – much less the featured poster artist for Oxford’s 20th annual Double Decker Arts Festival.

Out of the five designs Estrada submitted, his print containing the double decker bus, the stage and the courthouse — all framed by the Oxford square backdrop and an undulating blue sky — was the chosen design to represent the 20th annual Double Decker Festival.

“I don’t think they’ve had the courthouse in the design ever, so they liked that idea,” Estrada said. “I tried to incorporate everything that goes into (the festival), or what Double Decker’s about.”

Estrada, a UM alumnus, began school pursuing a business degree. He struggled, and eventually found himself on academic probation. Though he dabbled in art classes during high school, he had eventually lost interest after transferring schools. The summer after his sophomore year, though, Estrada began as an art major.

“Junior year I took my first printmaking class, and pretty much after that I was hooked… I never knew what printmaking was… I’d never done it before until I got here,” said Estrada.

Now, Estrada has established himself in Oxford. He produces a number of popular prints such as roosters and sugar skills.

Estrada created his prints out of his apartment when he is not working at his day job in the university’s athletic department.

This past year, he converted his spare bedroom into a printmaking studio. One side of the room contains an etching press, which he uses to evenly transfer the designs from the woodblocks onto sheets of paper. The other side is made up of shelves that contain a plethora of woodblocks, ink and tools. His studio has almost begun to burst at the seams with old and new designs and prints.

Lately, Estrada has found himself toiling away into the night creating art.

“My wife, she asks when I’m coming to bed and I tell her I can’t,” Estrada said. “I’m not sleepy because when I’m working I still have this energy to keep on going.”

The process of creating a design is made up of several parts. First, Estrada must draw out the design, with all the words in reverse. Using sharp chisels and gauges, he carves the design into medium-density fiberboard, or MDF, a compressed particle wood. Once he has done this, he can roll on the ink, place paper on top, and crank it through the etching press.

Over the years, Estrada said he has grown as an artist. His designs, though never truly lacking in detail, have become extravagant etchings that catch the eye and maintain its interest.

Estrada’s first attempt at the poster actually didn’t come out as planned. The design was much too dark after the print, so he went back and painted in the colors by hand, creating the vividly colorful print seen now. The entire process for the poster’s creation, Estrada said, took him around six hours, but he’s worked for up to two days on projects like one 4-by-8 foot print he crafted for a group show.

All of Estrada’s hard work came to a close when, a couple weeks ago, he began to see his Double Decker Festival poster in different storefronts and restaurants around town. Since then, he’s received praise for his design on social media and in public.

After Double Decker – when he has more time – Estrada plans to start focusing on new ideas and pieces, as he leaves behind some if his earlier core themes, such as works conveying his Mexican heritage and Southern home. Estrada said he would like to shift his sights to more pieces about immigration and recent social issues.

Frank Estrada can be found at Booth 73 in front of Neilson’s Department store this weekend for Double Decker. There, along with his other designs, some of his original Double Decker posters will be for sale.