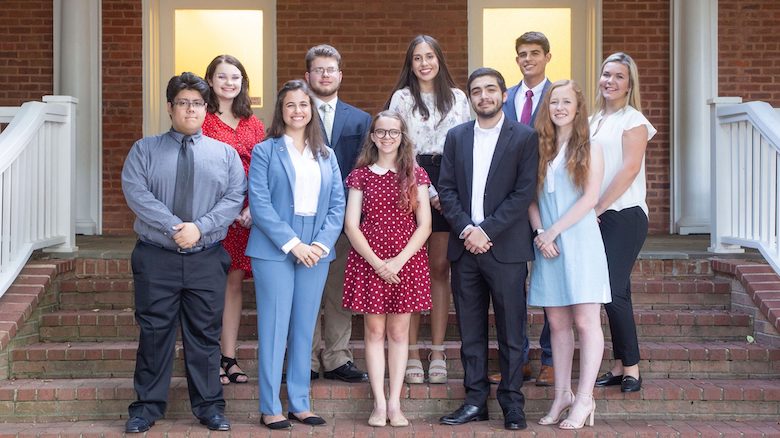 Receiving a Croft Scholarship to pursue her work in the Croft Institute for International Studies at the University of Mississippi is an “incredible honor” for Edith-Marie Green.

An Oxford native, Green knew she wanted to study abroad in college and focus on a foreign language, so she toured the Croft Institute and realized the program was the one for her. Her Croft Scholarship has only validated that decision, Green said.

“To be considered worthy of a scholarship to study something I am so passionate about made me hopeful for my time here at UM,” she said. “I feel like people believe in me and believe in my ability to succeed here, and not only that, but want to help me succeed.”

Green is among 10 students enrolled in Croft who are recipients of distinguished scholarships this fall.

Gillian Littleton was awarded the institute’s Rose Bui Memorial Scholarship for Academic Excellence, which goes each year to Croft’s top rising sophomore. The scholarship is for up to three years.

The prestigious scholarships pay $8,000 a year, and funds can be combined with other scholarships. The scholars retain the funds as long as they stay in the international studies major and maintain a 3.4 grade-point average both in the major and overall.

“We are excited about this year’s group of Croft scholars,” said Oliver Dinius, Croft executive director. “At the heart of the Croft curriculum has always been the commitment to study a foreign language to a high level of proficiency, and these Croft scholars reflect that goal.

“They represent seven different languages – Arabic, Chinese, French, German, Japanese, Russian and Spanish – all but two of the languages offered in the Croft curriculum.

“This group of Croft scholars is academically impressive and at the same very diverse in terms of their background, life experiences and the high aspirations they have for making an impact on our society.”

For their international studies major, Croft students typically select a regional concentration from among East Asia, Europe, Latin America and the Middle East, and a related foreign language before their first semester in the program. Students later select a thematic concentration from among global economics and business, global health, international governance and politics, and social and cultural identity.

Of more than 220 high-achieving applicants – with an average ACT score of almost 30 – to the Croft Institute this year, 121 were admitted, and from that pool, the admissions committee selected 28 prospective students to interview for the scholarships. The students answered follow-up questions about their application essays and questions about current affairs, their intellectual interests and their motivations for pursuing a bachelor’s degree in international studies.

Green graduated from the Mississippi School for Mathematics and Science. Her concentration is on German and Europe.

Littleton, a St. Louis native who graduated from Webster Groves High School, is concentrating on Russian and Europe.

A graduate of DeSoto Central High School, Paredes is a Southaven native whose concentration is Chinese and East Asia.

A college fair introduced him to the opportunities of the Croft Institute, he said.

“It felt like something that encapsulated my interests very well,” Paredes said. “I had always thought language and culture were really interesting my entire life coming from a Hispanic background, and I have always been fascinated with numbers, economics, statistics and data from since I knew of their existence.

“Croft offered both of those big interests into one major, along with a community of students that shared that interest. It really just seemed like a no-brainer to me.”

A Southaven native who graduated from Southaven High School, Weaver is concentrating on Japanese and East Asia.

Langlois, from River Ridge, Louisiana, graduated from the Academy of the Sacred Heart. Her concentration is on French and Europe.

Colley is a Walls native and graduate of the Mississippi School for Mathematics and Science whose concentration is on Arabic and the Middle East.

A lifelong interest in foreign affairs and in-state accessibility is what drew Colley to Ole Miss and the Croft Institute.

“For as long as I can remember, I always heard my father and grandfather talking about foreign affairs, and it caught my interest,” he said. “I’ve always read into other cultures, history and even linguistics. Naturally, I trended toward international studies and similar fields.

“This probably would not be possible without the fact that this university is only an hour away from where I am from. It was simply too perfect to pass up.”

Williams is a Manchester, Tennessee, native who graduated from The Webb School. She is concentrating on French and Europe.

Rice is a native of Grand Rivers, Kentucky, and a graduate of Livingston Central High School. Her concentration is Chinese and East Asia.

From Franklin, Tennessee, Kriplean is a graduate of Fred J. Page High School and is concentrating on Spanish and Latin America.

A native of Brandon, Pagoaga is a Northwest Rankin High School graduate who is concentrating on Spanish and Latin America.

Ecstatic upon being accepted into the Croft Institute, Pagoaga said receiving a Croft Scholarship “only reassured me in my decision to major in international studies.” She became interested in the institute on a visit to Ole Miss during her senior year when she heard Croft students talking about the program.

“I knew I wanted to continue my education in Spanish, and when I found out a major part of the institute was learning a new language, along with learning more about the world around you, I knew it was a perfect fit for me,” she said.