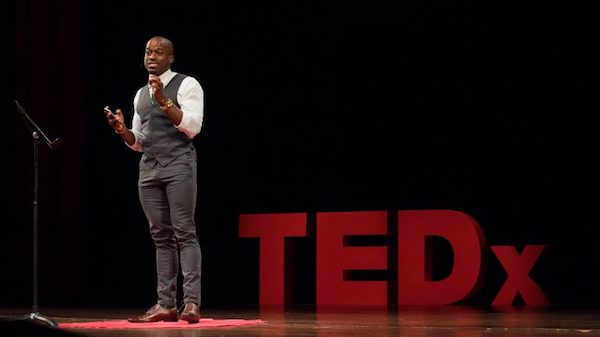 Brian Foster, assistant professor of sociology and Southern Studies, discusses his research at the recent TEDxUniversityofMississippi event at the Ford Center. Photo by Kevin Bain/University Communications

The 2018 lineup included faculty members, a graduate student, a law student and others discussing a variety of topics, including how substance abuse is treated by the criminal justice system, lessening the dependence on foods that come from slaughterhouses and forming your worldview.

The series is completely organized and designed by Ole Miss students with the original theme ‘MomentUM,’ which celebrates the diversity of people and ideas that are collectively moving our world forward, said Marvin King, associate professor of political science and African American Studies, who serves as TEDx faculty adviser.

“We were thrilled to invite the community to the best TEDx event we have hosted here in Oxford since its founding,” King said of the February 3 event at the Gertrude C. Ford Center for the Performing Arts. “The ‘MomentUM’ talk series is designed to embody the spirit of both the university and of TEDx.”

King said he’s proud of the energy the Student Planning Committee brought to getting the event together.

“They selected the speakers, designed the artwork and stage presence,” King said. “They’re all in. Each year we produce a better event, and this year was no exception.

“We were very excited to bring TEDx back to campus for a third time. We think it was a fun and engaging show, complete with a live music intermission.”

Will Tribble, a junior mechanical engineering major from Charlottesville, Virginia, and one of the event’s coordinators, said that inviting students to speak was important to the committee this year.

“Our speaker selection process was intended to reflect the nature of our event: showcasing the best of Mississippi while introducing new perspectives as well,” Tribble said. “As a student-run event, we made it our goal this year to showcase students for the first time.

“Due to the overwhelming enthusiasm for this opportunity, we were able to select multiple students to speak.”

TEDx uses the widely popular TED Talks conference format, which brings together lecturers and other participants in a global set of conferences under the slogan “Ideas worth spreading.” TEDx is a program of local, self-organized events that bring people together to share a TED-like experience.

For the first time in the event’s history, students were among the speakers taking the stage to share their ideas worth spreading. Besides the headlining speakers, the event also featured a talk from a local middle school student with the Lafayette Middle School TED-Ed club.

The professional speakers headlining this year’s event represented Mississippi, Southern California and Brooklyn, New York. Their talks highlighted topics ranging from the interpretive power of storytelling to the future of global food production.

Speakers for this year’s event were: