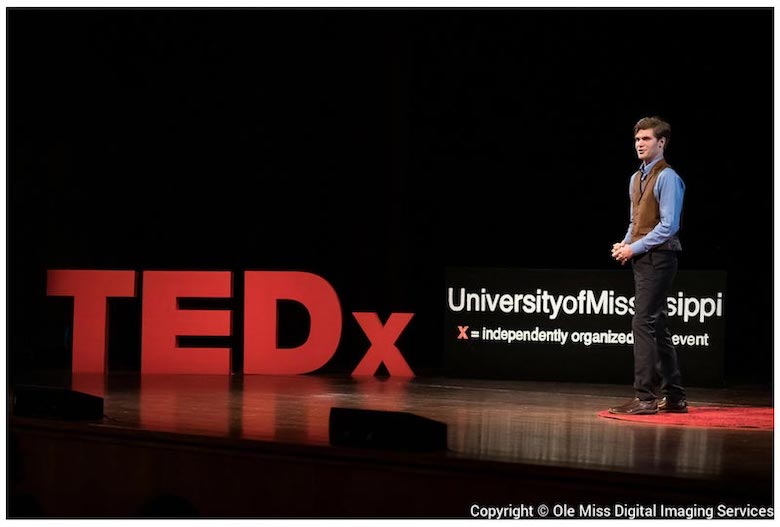 The fourth annual TEDxUniversityofMississippi, an event modeled from the global program TED—a nonprofit organization devoted to sharing “ideas worth spreading,” featured eight speakers on topics related to the theme of “New Horizons.”

Senior political science major Jakob Anseman, the only undergraduate student who gave a talk, spoke about his experience having Asperger’s syndrome and shared his ideas to strengthen and advance the autism acceptance movement.

“When I was in community college, I hosted a similar forum in which I talked about some of the social and economic struggles,” Anseman noted in The Daily Mississippian and said he is creating an organization called Team of Autistic Campus Organizations (TACO) to help autistic adults find sensory friendly environments, match with understanding roommates, and receive more support overall.

“I just hope it helps bring awareness and opens some doors, some opportunities for anybody with autism,” his father Brian Anseman said.

The other speakers at the 2019 event were:

Christian Anscheutz is chief digital officer for UL (formerly known as Underwriters Laboratories), where he is responsible for identifying, prioritizing and embedding technology innovation and digital trends into the vision, strategy and operating models required to sustain and accelerate the company’s growth.

Luc Rébillout is a doctoral student in hydroscience at UM. Rébillout was studying aerospace engineering in France in 2014 when he came to UM for an internship. He returned to the university to pursue his doctoral degree.

Steven Soifer, chair of the UM Department of Social Work, specializes in the study of issues related to public restrooms in society and the workplace. “My goal is to raise public awareness about these issues, and to bring the U.S. into the 21st century regarding toilet issues.”

Glenn Parsons, UM professor of biology and director of the university’s Center for Biodiversity and Conservation Research, has directed 18 master’s and doctoral graduate students, many of them shark biologists. He has studied sharks for the past 40 years and published more than 100 scientific papers, reports, books, and articles on sharks and other fishes. WATCH VIDEO>>

Zaire Love is the social media community manager at Rescue Social Change Group in Atlanta and is pursuing a Master of Fine Arts degree in Documentary Expression at the University of Mississippi Center for the Study of Southern Culture. She examined how “global recognition of two Southern black women, Beyoncé Knowles Carter and Fannie Lou Hammer, has helped diversify the South’s narrative by illustrating how their unapologetic ownership of their identity as Southern black women has solidified their place in history as global icons for freedom of expression, social justice and activism.” WATCH VIDEO>>