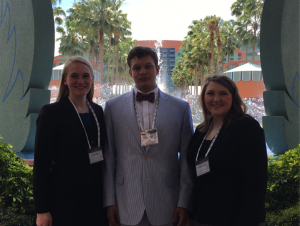 The UM Archaeology Ethics Bowl team is made up of juniors Alicia Dixon (left), Zachary Creel and Libby Tyson.

Earlier this month, three University of Mississippi students spent the day putting themselves in the shoes of professional archaeologists, debating issues of ownership, trespassing, reporting, stewardship, commercialization and sexual harassment in Orlando, Florida.

The students, all juniors in the university’s Sally McDonnell Barksdale Honors College, are the first UM team to compete in the Society for American Archaeology annual Archaeological Ethics Bowl. The event pits teams from universities across the country to discuss and debate various scenarios representing ethical quandaries professional archaeologists may face in their work.

“These dilemmas included real problems that archaeologists face when conducting fieldwork, as well as issues relating to conservation and preservation of cultural heritage,” said Hilary Becker, assistant professor of classics and adviser for the team.

“The most exciting part of competing was hearing different sides to the cases and thinking about how we might think outside the box for next year,” said Dixon, a classics and philosophy double major from Baldwyn. “We were also very excited to meet the other teams, who we know put in time and effort learning the cases, just like we did.”

Dixon, Creel and Tyson worked since last summer to prepare for the competition, meeting at least weekly since June. The team conducted their own research on the legal and ethical implications of various archaeologist cases, in addition to debating amongst themselves.

“There’s something awesome about working really hard for an extended period of time and then seeing that work pay off when a judge smiles because of a point your team just made,” said Tyson, of Hazlehurst, who is majoring in classics and English.

Despite the UM team being all undergraduates, they competed against five graduate anthropology students from the University of Georgia.

Although they did not win the championship, which carries an American Institute of Archaeology membership for each member of the winning team and a school trophy, the experience has them already planning for next year’s event.

“We competed well and learned a lot so that we will certainly be even more competitive next year,” said Creel, a classics and art history major from New Orleans.