Students and Faculty Spend the Night on Rowan Oak Grounds

UM students and faculty participate in a discussion of slavery, segregation and racism on the grounds of Rowan Oak before staying overnight in the old kitchen, behind the house. Photo by Thomas Graning/Ole Miss Communications

Ten University of Mississippi students and two professors spent a night recently in sleeping bags in the old kitchen behind Rowan Oak, home of Nobel Prize-winning author William Faulkner, as part of the Slave Dwelling Project.

The project’s founder, Joseph McGill, has worked for nearly a decade to identify and assist property owners, government agencies and organizations to preserve existing slave dwellings.

“We as a nation like to preserve buildings, especially antebellum buildings,” McGill said. “People aren’t as interested in preserving the buildings that housed slaves because they take us out of our comfort zones.

“When the buildings exist, it is harder to deny the existence of the people who once inhabited them.”

McGill hopes that by bringing awareness to these dwellings and partnering with historians, students, faculty and the general public, a more complete story of history, one that includes African-Americans, can be told.

A descendent of slaves himself, McGill has stayed overnight at more than 100 slave dwellings in 16 states to create a conversation and try to imagine what life was like for the enslaved people living on plantations across the country.

“The most valuable and powerful part of these sleepovers is the conversation about slavery and the legacy left today on this nation,” he said.

The students and faculty began their evening in Adirondack chairs set in a circle to discuss racial problems in the U.S., segregation and racism.

“A lot of schools don’t talk about these topics and though we’ve come so far as a nation, there’s still a lot of work that needs to be done,” said Akim Powell, sophomore journalism major from Long Beach. “I’d like to see more projects like these to educate the public about what others have been through.”

The group stayed in the old kitchen in sleeping bags on the floor as the temperature dropped into the mid-40s overnight and all elements of nature awaited just outside a layer of brick. 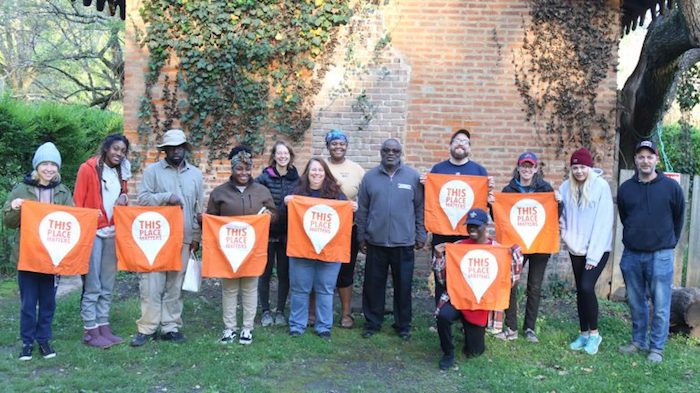 Joseph McGill (center), founder of the Slave Dwelling Project, and UM students and faculty prepare to spend the night in the old kitchen behind Rowan Oak. McGill’s mission is to help preserve the structure to add to the historic narrative of enslaved people. UM photo by Christina Steube

Powell developed an interest in the experiences of enslaved people when he worked on a project for a history course, “The Rise and Fall of American Slavery, 1619-1877.” The project involved looking through census records of his ancestors.

“It only inspired me to learn more,” he said. “These slaves were strong people. I don’t know that I could’ve personally survived living in these conditions for a long period of time.”

The sleepover offered students an opportunity to engage in meaningful conversation around slavery and its legacy, said Anne Twitty, an associate professor of history who participated in the activity.

“It was really inspiring to watch my students share their experiences as white and black Southerners so respectfully,” Twitty said. “Although white Americans tend to think that conversations about slavery and race are necessarily uncomfortable, the reality is that a willingness to listen goes a long way.

“Being able to acknowledge the extent to which slavery and enslaved people made our state and our nation is absolutely vital to the process of moving forward together in a productive way. We can’t do that unless we’re honest, and being honest entails speaking frankly about the damage that was done by slavery, slaveholders and white supremacy.”

The UM Slavery Research Group collaborated with other departments on campus, including the Center for the Study of Southern Culture, to bring McGill to campus. The research group is working to identify enslaved people in north Mississippi to discover more about their daily lives.