Student to Work with Smithsonian on Expat Women Artists 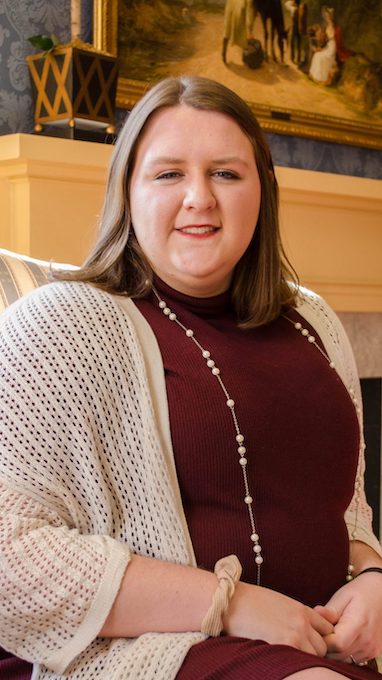 Grace Moorman, a junior art history major at UM, is working as an intern at the Smithsonian Institution’s National Portrait Gallery this semester. Photo by Olivia Whittington

University of Mississippi student Grace Moorman is going to Washington for the spring 2019 semester to work as a curatorial intern at the Smithsonian Institution’s National Portrait Gallery on a project that highlights the contributions of 20th century women to the arts.

Moorman, a junior art history major from Madison, is to start in January as a Smithsonian researcher working on the influence of American women artists in Paris in the 1920s as part of the exhibit “Brilliant Exiles: American Women in Paris, 1900-1939.”

A student in the Sally McDonnell Barksdale Honors College, Moorman had applied for several internships in Washington, and applied to the Smithsonian just before Thanksgiving. She quickly heard back and was offered the position.

“It happened so fast,” Moorman said. “In the series of five days, my whole spring semester had gotten turned around. I was floored, and I am still pretty floored, but I’m extremely excited.

“The reason this internship will be so good for me is that I want to curate. I want to work in an art museum setting and this is a huge stepping stone towards being able to do that.”

The National Portrait Gallery was created by Congress in 1962 with the goal of displaying portraits of “men and women who have made significant contributions to the history, development and culture of the people of the United States.” It has one of the only complete collections of presidential portraits outside the White House, including Gilbert Stuart’s famed “Landsdowne” painting of George Washington.

The collection has grown to more than 23,000 items in all formats, from prints to daguerreotypes to digital. Moorman will be part of the Smithsonian’s efforts to diversify its galleries.

“I am going to be working on an exhibit about women who left the United States for Paris in the early 20th century,” Moorman said. “These women were avant-garde for their time, and as writers, artists, poets and others, they decided that going to one of the art centers of the world would be best for them.

“The exhibit is going to explore their influences on their fields and why they were overlooked in United States history.”

The Smithsonian staff she will be working with were particularly excited to find a woman from the South to help with the work because many of the women in the exhibit are from the South as well, she said.

Moorman credits the university’s Department of Art and Art History, the UM Museum and others for her development and the opportunity to work as a Smithsonian intern. She also credits the Division of Outreach and Continuing Education for finding housing for her in a townhouse on Capitol Hill.

Kris Belden-Adams, Ole Miss assistant professor of art history, has worked with Moorman as her professor and academic adviser, including advising her internship. Belden-Adams said Moorman has distinguished herself as a strong writer, keen thinker and hard worker.

“My own children speak often of ‘Miss Grace’s’ patience, good humor and sincere joy for working with children,” Belden-Adams said. “Grace is one of my 8-year-old’s role models.”

Belden-Adams said she is thrilled Moorman was able to secure an internship working with the National Portrait Gallery as it launches its initiative to bring attention to women artists.

“It’s a perfect way for her to get hands-on experience in curating exhibitions, and to get one step closer to her goal of becoming a museum curator,” Belden-Adams said. “But Grace also will be helping the Smithsonian to find voices often left out of our histories, and to help them be heard.

“This is important work, and I’m proud that she will be contributing to this project.”