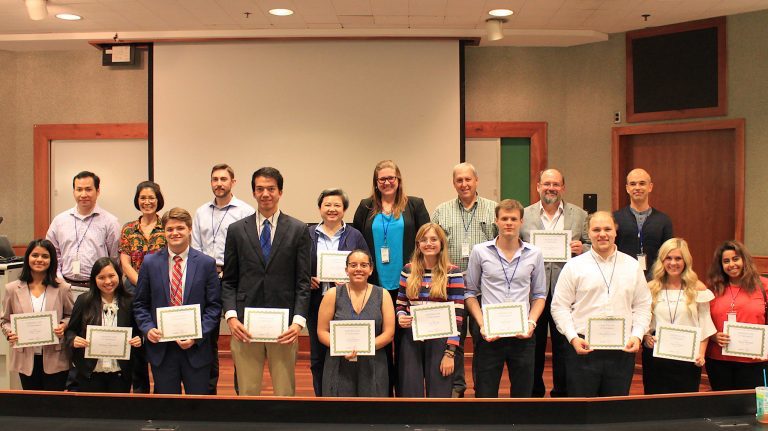 The 10 students involved with the inaugural Neuroscience Summer Research Education Program pose with their mentors during the program’s summer expo. Photo by Shea Stewart/University Marketing and Communications

An initiative of the university’s Flagship Constellations, the program provided stipends for undergraduate students to engage in eight-week collaborative research with a mentor exploring neuroscience related to brain wellness.

Split between the Oxford campus and the University of Mississippi Medical Center, the program aims to develop new pipelines for pre-graduate and pre-medical students interested in neuroscience.

“The participating students gained research experience and developed connections with neuroscience faculty at the Oxford and Jackson campuses,” said Kristie Willett, a team leader of the Brain Wellness Flagship Constellation, which funded the program. Willett is chair of biomolecular sciences and a professor of pharmacology and environmental toxicology in the UM School of Pharmacy.

“Our aim was to expose the students to firsthand knowledge of scientific methods, critical thinking and professional networking within the discipline.”

“The research program has been amazing for me,” Hansen said. She worked with a program known as EEGLAB that processes data generated by recording the electrical properties of the brain. She also used virtual reality in her research.

“Learning to work with EEGLAB would have to be my favorite part because I have found a lot of different ways to analyze the data we have taken.”

“The students expressed a great deal of satisfaction with the program, and several indicated that they are ready to attend graduate school after completing their degree,” said Gregg Roman, a team leader of the Brain Wellness Flagship Constellation. Roman also is professor and chair of biology at UM.

“Several faculty participants expressed great enthusiasm with the outcome and would even like to see it expanded. I view the program as a success.”

At the end of the program, students presented their work during an expo at the School of Pharmacy. The July 23 event included five-minute presentations from neuroscientist mentors and other neuroscientists, poster presentations by the students and a keynote address from Harry Pantazopoulos, an assistant professor of neurobiology and anatomical sciences at UMMC.

The program kicked off with an early June visit to UMMC’s Translational Research Center in Jackson, which houses the Gertrude C. Ford MIND Research Center and the Neuro Institute, among other research areas.

The Flagship Constellations initiative, unveiled in November 2017, is a collaborative effort among faculty, staff and students from the Oxford campus and UMMC to explore and solve complex issues through the diversity of ideas. The initiative includes multidisciplinary teams working to find solutions to grand challenges in the areas of brain wellness, community well-being and disaster resilience.

The Brain Wellness Flagship Constellation includes an academically diverse team researching better understandings behind brain function as a result of injury, addiction and disease. The team is engaged in population-based research, clinical care, education and basic research to assist in the development of technologies and evidence-based practices that could bolster the prevention of and recovery from brain impairment.

Joining Roman and Willett as team leaders of the constellation is James Rowlett, a professor and vice chair for research in the Department of Psychiatry and Human Behavior at UMMC.