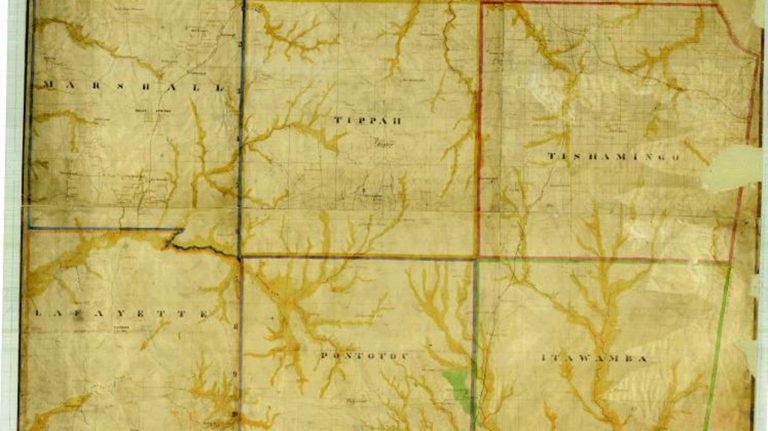 The UM Slavery Research Group is exploring the history of slavery in Oxford and on the UM campus, which has led to the discovery of Civil-War era maps of the area.

A group of University of Mississippi faculty members is working across disciplines to learn more about the history of slavery in Oxford and on the UM campus.

But since its inception, the group moved discussions to action.

“The discussions we had within the reading group were engaging and robust,” Ross said. “It became clear early in our meeting that we wanted to better understand the lives of enslaved people and their historic significance to the university. We also wanted to examine how this history relates to contemporary issues of race on campus and in our society.”

The work has already led to some preliminary discoveries, including names of several slaves who worked on the UM campus, as well as achievements and activities of slaves in the area. The group has recovered original maps of campus and identified several buildings used as living space for slaves and servants from the 1850s to the 1890s.

The search for the maps began within the working group and led to collaborations with community members from the Oxford-Lafayette County Heritage Foundation to discover the maps in the National Archives in College Park, Maryland. There, the group found eight maps of north Mississippi produced by the Union Army in 1862, detailing slaveholders, their homes and slave quarters in the area.

“These maps represent a significant resource for researchers interested in reconstructing a deeper understanding of the relationship between slavery and the University of Mississippi,” Jackson said.

To expand on their findings, the UM Slavery and the University Working Group has invited prominent slavery scholars to campus for training and consultation and has become affiliated with slavery research efforts at other universities, including Brown University and the University of Virginia.

Representatives of the UM group participated in the Universities Studying Slavery conference in September in Williamsburg, Virginia.

The group also is working with Monticello’s Digital Archaeological Archive of Comparative Slavery to potentially digitize evidence of slave life they have discovered. Later this fall, the group plans to invite DAACS project director Jillian Galle to the UM campus for training.

UM could become the first Deep South school to participate in the DAACS database.

“We are very excited about the possibility to collaborate with such a prestigious organization,” Jackson said. “They represent the state-of-the-art in archaeological research on slavery, and the opportunity to work with them would be extremely beneficial to our students and our faculty.”