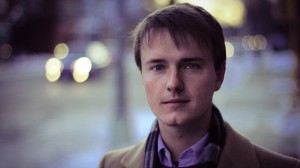 A poet and a scholar, Michael Shea earned a Master of Fine Arts in May from the University of Mississippi. Now he is headed to Argentina as a 2014 Fulbright U.S. Student Award winner, the university’s second Fulbright Scholar of the year.

Shea will participate in the English Teaching Assistant program, which places Fulbright recipients in classrooms abroad to provide assistance to the local English teachers. ETAs help teach English language while serving as cultural ambassadors for the United States.

A native of Clearwater, Florida, Shea is interested in the connections between Argentina and American literature and culture.

“As a student of Spanish, it was the ability to contextualize my language skills through literature that allowed me to fully understand my new tongue,” Shea said.

With an English teaching assistantship to Argentina beginning in March 2015, Shea plans to establish a community poetry workshop where students will read poems by American poets and attempt to write their own works in English to encourage cross-cultural awareness and language acquisition.

“I hope to offer my students a similar experience by teaching English through poetry, while also fostering greater understanding between the two nations on a grass-roots level,” he said.

Shea also wants to establish a virtual reading series in which American poets will be invited to read their work via video chat programs to a live Argentine audience (and vice versa), creating an international dialogue.

This opportunity “will allow me to lay a strong foundation for future studies in global literature and translation,” Shea said.

“As a graduate student in our Master of Fine Arts program, Michael Shea has demonstrated a high level of talent, creativity and dedication,” said Derrick Harriell, assistant professor of English and African-American Studies. “He’s been a model for our program and is extremely deserving of this distinguished honor.”

At UM, Shea was the senior editor of Yalobusha Review, the university’s literary journal, while coordinating the monthly Trobar Ric Reading Series.

In Argentina, Shea plans to seek out contemporary Argentine poets and translate their work into English, a project that will continue with the eventual goal of publication upon his return to the U.S. He also plans to pursue a doctorate in comparative literature, with a specialization in Pan-American poetics. Shea’s parents are Michael and Annie Shea of Clearwater.

“We are proud of Michael’s award and his vision and poetic sensibilities,” said Douglass Sullivan-Gonzales, dean of the Sally McDonnell Barksdale Honors College. “We hope that his sojourn in Argentina enables him to understand the depth of dilemmas facing humanity and that he retraces successfully the paths that the great Argentinian poets have trod.”

Students interested in applying for the Fulbright U.S. Student Award are encouraged to contact Debra Young of the Office of National Scholarship Advisement at onsa@olemiss.edu.