August 8, 2017 | Courtesy of the Southeastern Conference 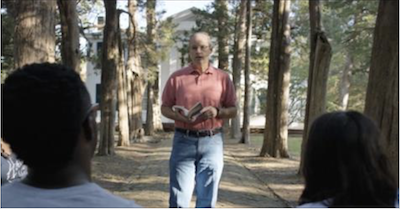 Dr. Jay Watson, the Howry Professor of Faulkner Studies at Ole Miss, joined the English department in 1989 and has been with the school teaching what he loves for nearly 30 years. For the last 10 years, he’s been a professor of English, but that title doesn’t even begin to touch on his personal accomplishments in the field.

Before Dr. Watson was featured in SEC TV commercials, he was honored with a remarkable number of awards and nominations. These include the 2014 Humanities Teacher of the Year, a nomination for the SEC Faculty Achievement Award, the 2012 Faculty Achievement Award, and a rare Honorable Mention for the 2013 Holman Award for his book Reading for the Body: The Recalcitrant Materiality of Southern Fiction, 1893–1985. The Holman Award recognizes the best book of literary scholarship or literary criticism in the field of Southern literature published in the previous year. Dr. Watson’s accomplishments are impressive, but it’s impressions that he chooses to focus on — those he makes on his students and on his community.

Dr. Watson’s passion for the literary works of American writer and Nobel Prize winner William Faulkner is evident. For years, he was president of the William Faulkner Society, and he is now director of the annual Faulkner & Yoknapatawpha Conference at Ole Miss. His wisdom is communicated through his teachings, both in and outside of the classroom. He often holds class lectures on the lawn of Rowan Oak, Faulkner’s home.

A former student once said, “This is one of, if not the best classes I have taken at Ole Miss. Dr. Watson has such passion, and it is contagious. If you want to understand Faulkner’s imprint on the literary world, Oxford, and the South, take this course from Dr. Watson.”

Despite being touted as “one of the smartest, most diligent and productive teacher-scholars working the field of American literature and Southern studies today,” Dr. Watson says that “being around such a dedicated group of teachers, scholars, and citizens is a big part of what makes Ole Miss such a rewarding place to work.”