Against the backdrop of a nation with 2.2 million people behind bars, the Arch Dalrymple III Department of History sponsored a three-day conference examining the history of mass incarceration. Scholars, activists, writers, and former inmates focused on prison reform, reducing recidivism, restorative justice, and other initiatives. View students’ library exhibition here. 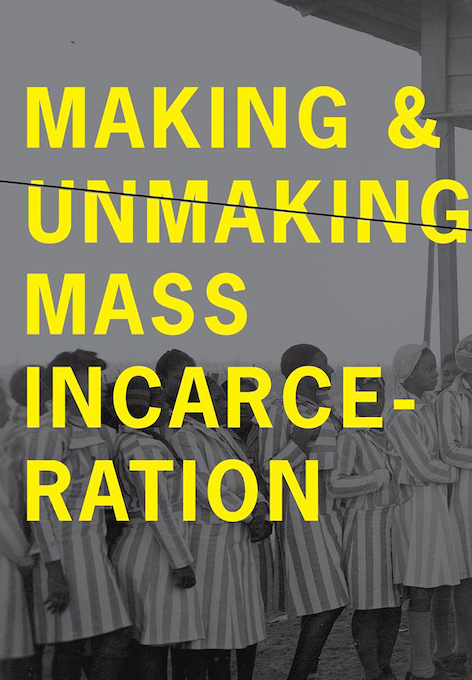 Against the backdrop of a nation with 2.2 million people behind bars, the University of Mississippi hosted a three-day conference focused on drastically lowering U.S. incarceration rates, improving higher education programs for inmates and envisioning a world without prisons.

“Making and Unmaking Mass Incarceration” brought scholars, activists, writers, former inmates and others to UM and Oxford on Dec. 4-6. At the Lyric Theater, UM Provost Noel Wilkin welcomed attendees and stressed the need for removing sweeping generalizations from public discourse.

“Higher education plays an important role in this area,” Wilkin said. “We must continue to generate and disseminate facts and we must also continue to share data to support the notion that reforms can achieve outcomes that are less expensive and more effective at decreasing crime rates. The data supports and warrants improvements, and generalizations that every crime is the same, or that every person who is incarcerated is the same, work against reform.”

“Disavowing people’s generalizations and focusing people on facts should be an important strategy to encourage change.”

The United States has the highest rate of incarceration in the industrialized world. Mississippi has the nation’s third-highest rate of its citizens behind bars, second only to Oklahoma and Louisiana.

The keynote speech was given by Albert Woodfox, author of “Solitary.” Woodfox spent more than 40 years in solitary confinement in a 6-by-9-foot cell at the Louisiana State Penitentiary, known as Angola Prison, for a crime he says he didn’t commit. He was released in 2016.

Patrick Alexander, UM assistant professor of English and African American studies, and Otis Pickett, assistant professor of history at Mississippi College, were honored at the closing of the conference for the Prison-to-College Pipeline Program. The two cofounded the program, which allows men and women behind bars to earn credits toward their college education.

The program began in 2014 with 17 students at the Mississippi State Penitentiary at Parchman, but has expanded to include prisoners from Central Mississippi Correctional Facility. More than 60 have participated in the program, with many earning English credits from UM and credits in history from Mississippi College.

The effort led to Alexander and Pickett winning the Mississippi Humanities Council Humanities Educator Award in 2018.

Their work will affect generations of scholars to come and shows how important education is in reducing recidivism, said Lee M. Cohen, dean of the UM College of Liberal Arts.

“Dr. Alexander and Dr. Pickett are innovators and pioneers in scholarship on mass incarceration and pedagogy in prisons,” Cohen said. “… These scholars have most certainly paved the way for prison education and justice initiatives at the University of Mississippi and throughout the state of Mississippi.”

Alexander said he learned shortly after arriving at the university six years ago that it is dedicated to the cause of educating Mississippi inmates.

“At faculty orientation for the College of Liberal Arts, I learned the university was committed to prison education work and it was stated on three occasions that if you want money as a faculty member to teach in prison, to educate learners in our state who are incarcerated, we have money here at this university for that,” Alexander said.

He said his incarcerated students drive him to make improvements to the curriculum each year, and they continue to inspire him.

“It’s really their hunger as we go in each semester and ask what they would like us to teach, how can we improve, that helps the program grow,” Alexander said. “I know they are not here, but I want to tell them when I see them next just how much they are appreciated as well.”

Pickett, who is also an UM alumnus, said he was thankful to the faculty here, who caused a spark to ignite inside him.

“I do want to thank the Department of History for teaching me about incarceration in American and enslavement in America,” Pickett said. “Coming here as a graduate student in that department opened my eyes. I would not be doing this work if it were not for the study of history here.”

Garrett Felber, a UM assistant professor of history, was lead organizer of the conference. He said his goal was to create a space for academics to meet with activists and practitioners in transforming both universities and prisons.

As the conference ended, Felber said he was moved by the passion with which participants addressed the issues.

“We don’t all agree,” Felber said. “We don’t all have to. It’s not necessarily about being like-minded, but that community of radical love that I have felt the last couple of days means a lot. I just want to thank you all for that.”