October 24, 2017  |  By Nathan Towery for the University of Mississippi Graduate School 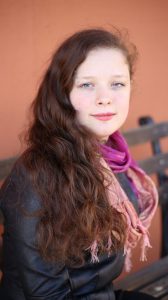 Molly McCully Brown (M.F.A. English ’17), a former John and Renée Grisham Writer in Residence fellow at the University of Mississippi, has embarked on a new adventure in central Arkansas this fall. She is the inaugural Jeff Baskin Writers Fellow with Oxford American magazine. She will use her time as a fellow to work on a manuscript, provisionally called What We Are.

The manuscript will be a collection of personal essays that describes her “evolving understanding of the intersection between the physical body and that intangible other I have come to call the soul.” Her fellowship will grant her a $10,000 living stipend, housing and an apprenticeship with Oxford American for nine months.

Brown began her academic career at Bard College at Simon’s Rock. She followed Bard College with Stanford University and concluded with the University of Mississippi, where she received an M.F.A. in poetry.

She is the author of the 2016 Lexi Rudnitsky First Book Prize winner, The Virginia State Colony for Epileptics and Feebleminded. She was raised in rural Virginia, which is where she gained her inspiration for the book.

The Virginia State Colony for Epileptics and Feebleminded was a residential hospital near Lynchburg where people who had disabilities were sent. Many of the patients were sterilized because they were deemed unfit to reproduce. Since 1983, it has been renamed the Central Virginia Training Center and has been repurposed to help improve the quality of life of those with intellectual disabilities.

Having a disability herself, cerebral palsy, Brown writes to imagine what life would have been like inside of “the Colony” during the 1930s. In an interview with Terry Gross on NPR’s “Fresh Air,” she talked about the possibility that she could have been sent there had she been born in an earlier decade.

“It is impossible to know that for sure. I can look at my life and look at my family and look at my parents and think, no, never. That never would have happened. But I also understand that if I had been born 50 years earlier, the climate was very different.”

Brown also said the understanding of disabilities was different from what it is today. However, she still notices misunderstandings.

“I often get questions directed at people that I am with, as opposed to me.”