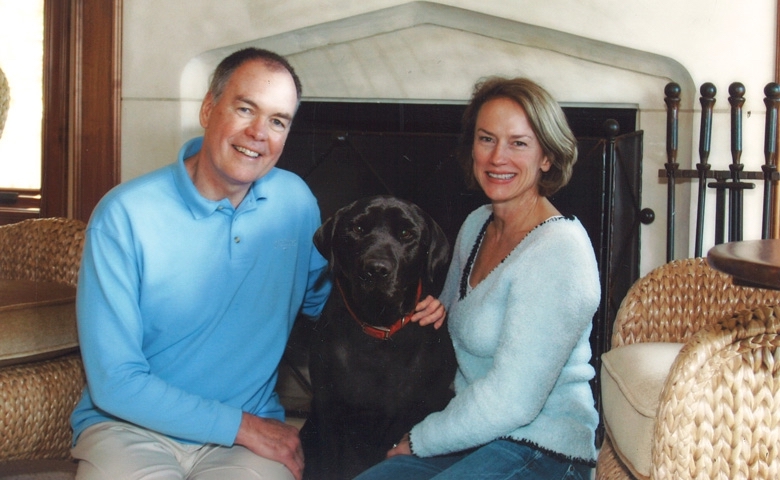 Ken and Carol Lackey at home with Hunter

Having served as a university president among other high-level positions in the state of Oklahoma, University of Mississippi alumnus Ken Lackey of Tulsa knows first-hand the importance of private support to public institutions of higher learning.

“I’m at a point in my life where I needed to make decisions about my estate, so after a thorough review of my plan and provisions for my wife and daughter, I thought of Ole Miss,” said Lackey, who with his wife, Carol, recently designated UM as the beneficiary of a planned gift estimated at more than $2 million. The gift will support the departments of mathematics and science within the College of Liberal Arts.

“Science and mathematics have played an important role in my life, and today science, technology, engineering and mathematics (STEM) are both the current underpinning and future of our society,” said Lackey, who earned a bachelor’s degree in mathematics from UM in 1965 followed by a master’s degree in business administration from the University of Texas in Austin.

“Ole Miss is lucky to have a chancellor who is grounded in and committed to STEM. I wanted to make a commitment which would place my goals in parallel with his vision for the university,” he continued.

Ole Miss Chancellor Jeffrey Vitter says the feeling is mutual: “We are fortunate to have esteemed alumni like Ken Lackey who know how private support strengthens our academic programs as well as our standing among our peer institutions nationwide. We greatly appreciate the Lackeys’ passion in designating this generous gift to our great university.”

The Lackeys hope their gift will encourage more individuals to select Ole Miss for the quality of STEM offerings.

“A gift of this magnitude will help transform our math and science departments by making them more competitive. Specifically, we will be able to better attract outstanding faculty members. Growing the strength of our faculty will help both our research and teaching missions,” College of Liberal Arts Dean Lee M. Cohen said. “We are extremely grateful to Ken and Carol for their generosity and support.”

A Jackson, Mississippi, native, Lackey enrolled at UM in 1962 and moved into Barr Hall (B).

“Barr B was a subculture within the university and we had lots of fun. Even though I joined a fraternity, some of my best personal relationships were made at Barr B,” said Lackey, whose dorm buddies include Netscape founder Jim Barksdale of Jackson and Palm Beach, Florida, attorney John Gary.

At Ole Miss, Lackey received a U.S. Army commission through the Ole Miss ROTC and, after graduate school, served two years on active duty from 1967 to 1969. For his service, the first lieutenant was awarded the Army Commendation Medal.

Now, Lackey is chairman of the board and the former CEO and president of the Tulsa-based NORDAM Group, which provides a range of aerospace components, manufacturing and repair services for private, commercial and military aircraft.

Previously, Lackey served as president of the University of Oklahoma in Tulsa and senior vice president of the OU System from 1999 to 2001. He was a member of Gov. Frank Keating’s administration, serving as his chief of staff from 1997 to 1999. From 1995 to 1997, he served as the Oklahoma Cabinet Secretary of Health and Human Services.

Before his service in state government, Lackey held the position of president of Flint Industries, a privately-owned, international company with interests in oil and gas services, manufacturing and commercial construction. Earlier, he held management positions with Skelly Oil (NYSE) and Kin-Ark Corp. (ASE). He continues to serve on a number of business and community boards in Tulsa.

Carol Lackey, a native of Columbus, Nebraska, graduated from the University of Nebraska and has enjoyed a successful computer career, working for Apple and subsequently Sun Microsystems.

In their spare time, the couple enjoys easy weekends at their lake home in northeastern Oklahoma as well as traveling extensively. A fifth trip to Africa is next on the calendar.

The Ken and Carol Lackey Excellence Fund, a scholarship established by the Lackeys in 2012, is open to gifts from individuals and organizations. To contribute, send checks with the endowment name noted in the memo line to the University of Mississippi Foundation, 406 University Ave., Oxford, MS 38655; or visit www.umfoundation.com/makeagift.

For information on supporting STEM at Ole Miss, contact Denson Hollis, executive director of development, at 662-915-5092 or dhollis@olemiss.edu.

Planned gifts award donors membership in the 1848 Society, named for the year the university welcomed its first students. The society recognizes those who thoughtfully provide for the university through bequests and deferred gifts. For information on including Ole Miss in long-term estate planning, contact Sandra Guest at 662-915-5208 or sguest@olemiss.edu.