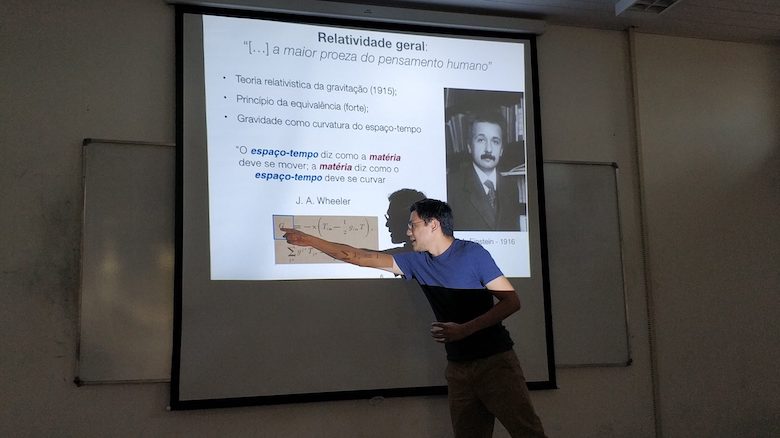 UM physics alumnus Hector da Silva presents a lecture on neutron stars for undergraduate students at the Universidade Federal do Pará in Salinopolis, Brazil. He has been awarded the GWIC-Braccini Thesis Prize for his 2017 doctoral dissertation. Submitted photo by Caio F. B. Macedo

A University of Mississippi physics alumnus has been selected to receive an international honor for his doctoral dissertation on gravitational wave research.

Hector Okada da Silva, of Belém, Brazil, will be presented the 2017 Gravitational Wave International Committee-Braccini Thesis Prize for “Compact Objects in Relativistic Theories of Gravity.” The honor includes a $1,000 cash award and a certificate, which will be presented to Silva at the 22nd International Conference on General Relativity and Gravitation/13th Edoardo Amaldi Conference on Gravitational Waves, set for July 7-12 in Valencia, Italy.

The prize was established by GWIC and the Friends of Stefano Braccini to honor a colleague by recognizing outstanding research in gravitational waves.

“I was very surprised,” said Silva, who completed his doctorate in physics in 2017. “While I think my thesis had material to be competitive for such a prize, actually receiving it is another thing altogether.

“This is especially given the high competition that year, as testified by all the excellent works that received honorable mentions.”

The prize-winning thesis addressed a key question in relativistic gravity: if modifications of Einstein’s general relativity do indeed exist in nature, could they leave observable imprints in astrophysical systems and in gravitational wave observations? It was chosen from a group of at least eight theses covering different aspects of the field of gravitational waves.

“The process of selecting a winner was a difficult one and highlights the high standards of research being carried out in our field,” said Martin Hewitson, director of the GWIC-Braccini Thesis Prize. “It is with excellent work like Hector’s that our field will continue to grow.”

Silva’s dissertation focused on various aspects of compact objects, such as neutron stars and black holes.

“These objects are the prime gravitational wave sources – as exemplified by the recent LIGO/Virgo detections – in nature and to describe them one needs to combine gravity with relativity, into a theory of ‘relativistic gravity,’” said Silva, a postdoctoral researcher at Montana State University since 2017 who begins another appointment at the University of Illinois at Urbana-Champaign this fall.

“I explored compact object in various theories – general relativity included – and analyzed their properties, which is important if one wants to confront these theories against gravitational wave observations.”

Emanuele Berti, formerly an associate professor in the UM Department of Physics and Astronomy and Silva’s adviser, nominated Silva’s dissertation for the Braccini Prize.

“Hector was definitely one of the strongest Ph.D. students produced by the University of Mississippi physics department,” said Berti, on the faculty at Johns Hopkins University. “During his Ph.D., he became a master in both analytical and numerical aspects of relativistic gravity.

“Hector is now a mature and independent researcher who, in my opinion, has the potential for a bright career as one of the world’s leading relativists.”

At the time Berti wrote Silva’s nomination letter, the winner had already published or submitted 25 papers. That number has since risen to 31. Of these, 10 papers formed the backbone of his Ph.D. thesis.

“Six were in Physical Review D, two were in Classical and Quantum Gravity and one each was in Monthly Notices of the Royal Astronomical Society and in the International Journal of Modern Physics,” Berti said.

“Hector is also an outstanding speaker. He won the Blue Apple Award for the best student talk at the Eighth Gulf Coast Gravity Meeting, a regional meeting held at the University of Florida in February 2015. This is a prestigious honor for students in the U.S. gravitational physics community.”

Unanimously nominated by the Ole Miss physics department for a Graduate Student Achievement Award, Silva is among only five physics students to receive this award.

“Hector has the intellectual capabilities and determination necessary to become a rising star in general relativity,” Berti said. “I would rank him comfortably within the top 5 percentage of postdocs on the market at the moment.”

Silva said his long-term plan is to remain in academia and to keep contributing to his field, which is going through an exciting period.

“As a professor, I want to help train the next generations of physicists,” Silva said. “I also hope to pursue my interests in the history of physics, particularly of gravitational physics and the origins of physics research in Brazil, in a more appropriate, scholarly fashion.”

To read Silva’s dissertation in its entirety, visit https://gwic.ligo.org/thesisprize/.