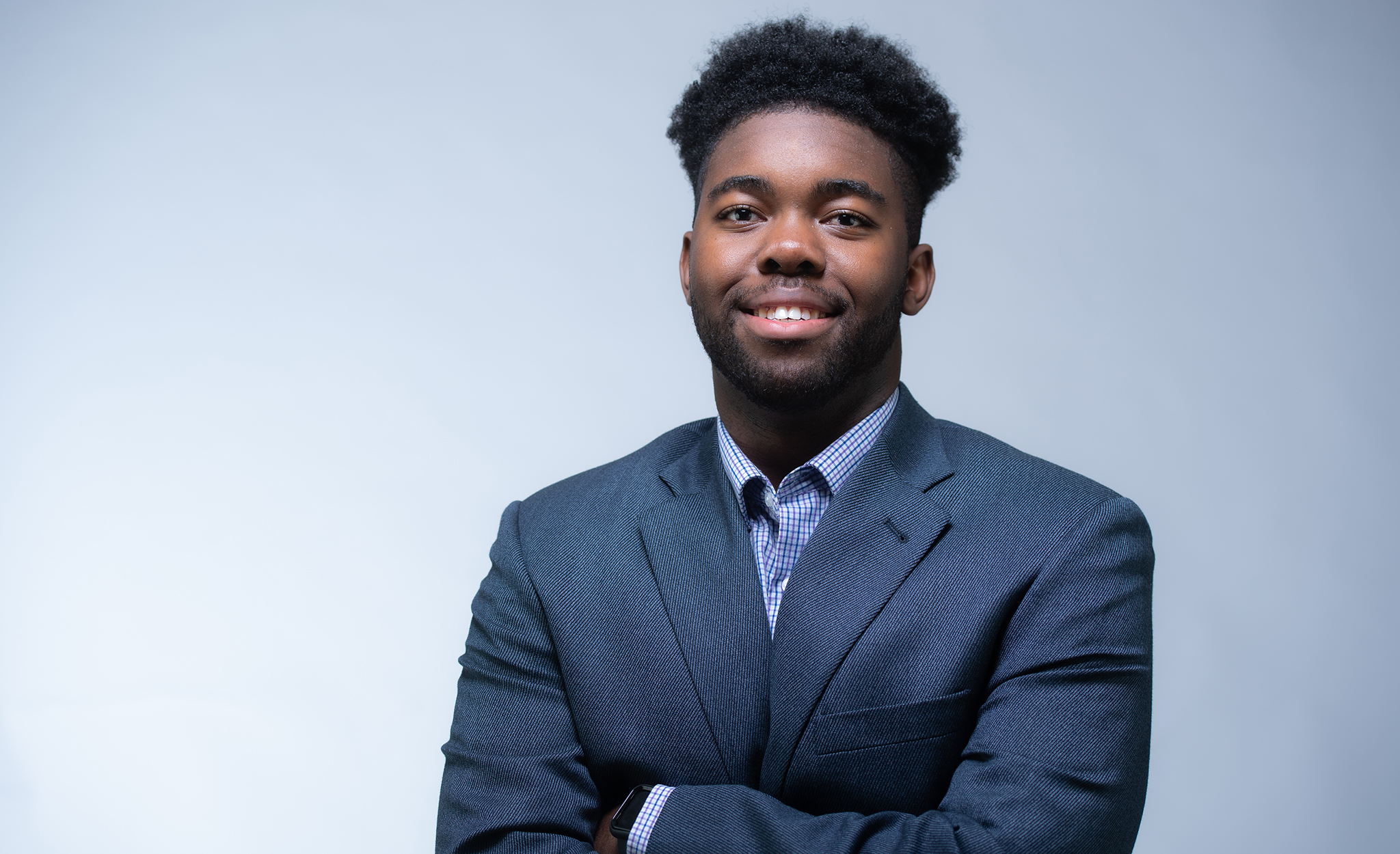 Jonathan Dabel, a junior economics and public policy leadership major, has faced many challenges but is using them as inspiration while he works to attain his degree. He hopes to earn a law degree and use it to help others who face hardships while trying to better themselves. Photo by Kevin Bain/Ole Miss Digital Imaging Services

As part of the 60th anniversary of integration at the University of Mississippi, this is the first of a four-part series based on the themes that are inscribed on the Civil Rights Monument on campus: perseverance, courage, knowledge and opportunity. These student stories reflect the characteristics that James Meredith embodied six decades ago when he enrolled as the university’s first Black student.

Jonathan Dabel gripped his two suitcases and looked up at Stewart Hall. He watched as scores of freshmen moved into their residence halls with truckloads of belongings and many hands to help.

“It was intimidating,” Dabel said. “They were unloading U-Hauls, and there I was with a couple pieces of luggage. I moved in on my own.”

Only Dabel knew how much it meant that he had finally made it to the University of Mississippi. After flying himself from southern Mississippi to Memphis, he used a $500 check to purchase an Uber ride to Oxford. 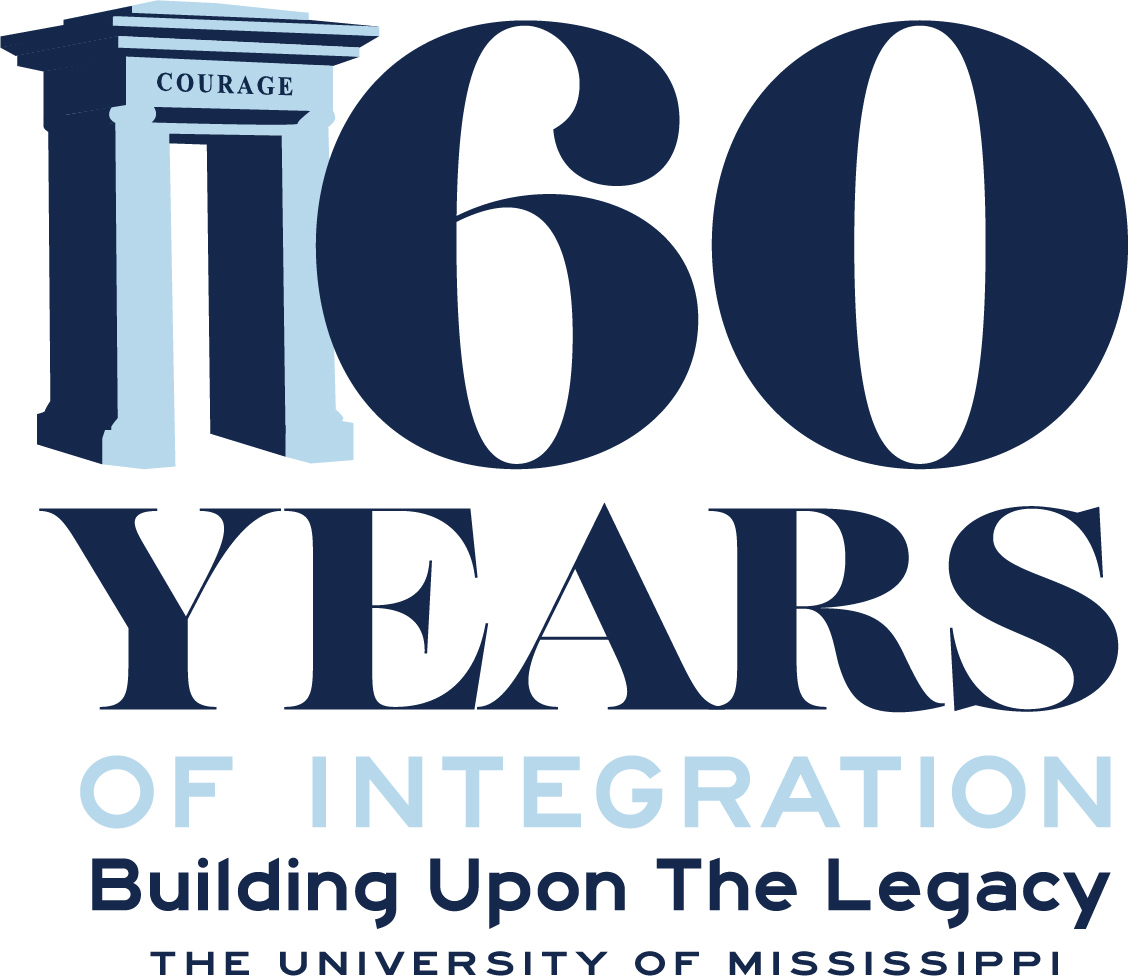 Today, Dabel is a junior majoring in economics and public policy leadership. He’s faced many challenges during his 21 years but is using them as inspiration while he works to attain his degree.

Born in Boston, Dabel spent his childhood in Haiti, his mother’s home country. After a catastrophic earthquake in 2010, Dabel and his mother moved back to the U.S. and lived near Miami. In 2015, Dabel moved to West Palm Beach, where he found commonality with the diverse community there.

Moving to Diamondhead, however, was a culture shock.

“I didn’t really know what diversity meant at that time because it had never occurred to me,” Dabel said. “When I moved to Mississippi, I was the only Black person in some of my classes – which was a first. I was the only person who spoke French and Haitian Creole, and it felt very, very different. I was teased for tucking in my shirt, or for not using certain types of slang.

“It kind of fueled me because I wanted to prove people wrong and show them that I can do great things like anyone else can.”

Although he struggled, Dabel achieved a great deal at Hancock High School. He was heavily involved in clubs and organizations, helped fellow students apply to college and was awarded a check from the Hancock Chamber of Commerce upon graduation.

This award was presented to only six outstanding students from five local high schools. Fatefully, that check ended up providing the means for him to physically travel to college.

At the time Dabel began his college search, his mother, Mimose, was living in Haiti. She continued to support him and encourage him to do everything possible to get a degree.

“She sent me $100, which is a lot of money in Haiti,” Dabel said. “I combined the money she sent with what little I had from a part-time job, and that’s how I got a laptop. It was used, but it meant so much to me.

“It helped me apply to schools, interview with Cornell and Dartmouth, and, ultimately, get my first fellowship.”

Dabel had some trepidation when he applied to UM.

“I had heard people talk a lot about the university’s past,” he said. “Honestly, it was a little scary at first. But I soon realized that although there is still a lot to be done, the university is constantly moving forward and changing.”

His decision to attend was solidified when he received an Ole Miss Opportunity scholarship, which covered the cost of tuition, housing and included a meal allowance.

Once he was on campus, he made friends and connected with students from all types of backgrounds. He also developed relationships with faculty and staff whom he now considers his mentors.

“Jonathan was one of those students I’d heard about before I’d met him,” Edney said. “A colleague of mine raved about this ambitious and bright student that I just had to meet.

“Before I’d had a chance to set that up, Jonathan found me walking across campus and, in characteristic fashion, followed me to my meeting and carried the conversation the whole way. 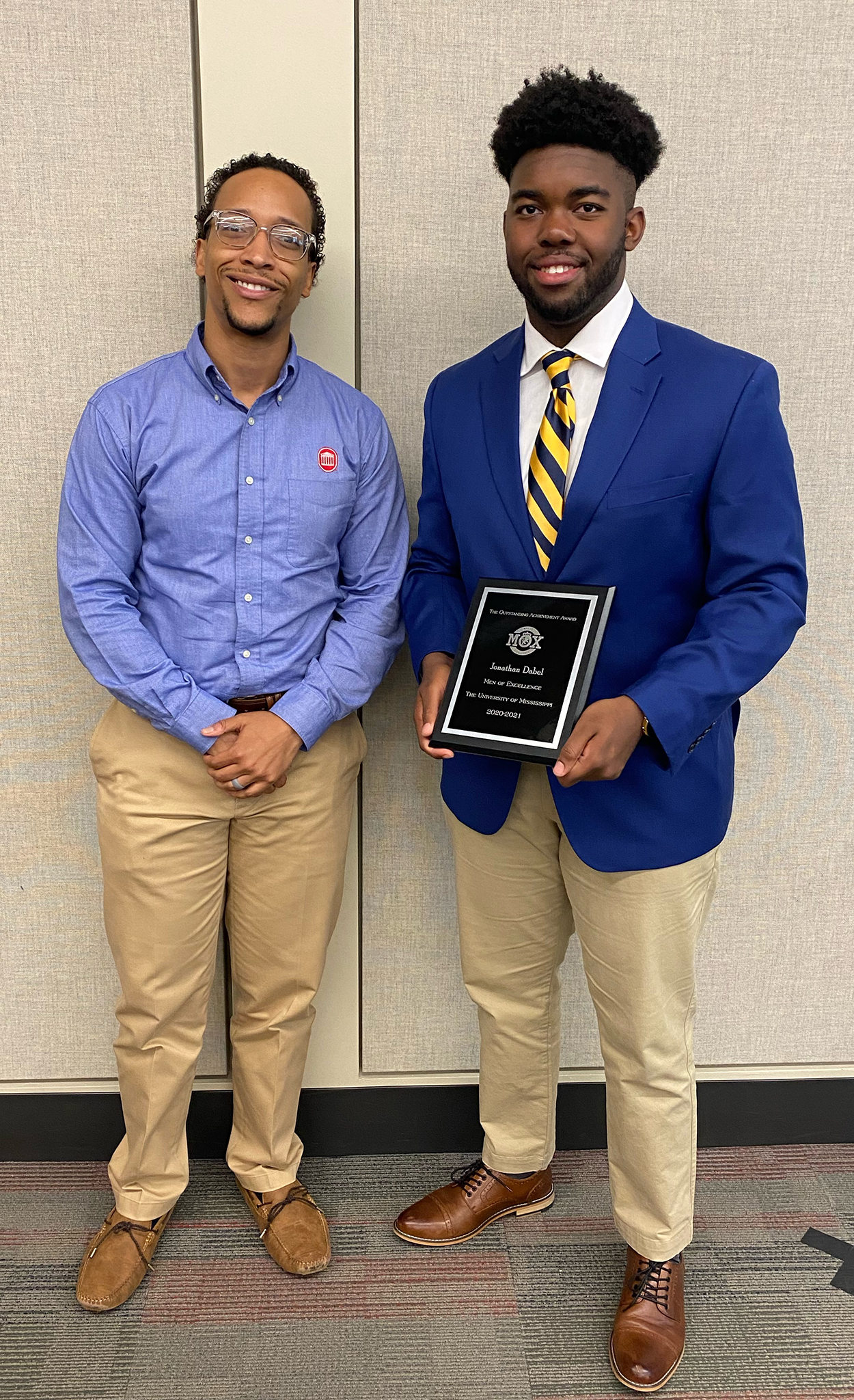 EJ Edney (left), UM assistant vice chancellor of diversity and inclusion, congratulates Jonathan Dabel for receiving an award from the Men of Excellence organization. Edney has served as a mentor for Dabel during his time on campus. Submitted photo

“That ability to connect with people – genuinely and instantly – is what drew me to Jonathan. His ambition and drive keep us connected.”

Dabel faced a defining moment during his freshman year. Finals were moved up due to COVID, which resulted in a longer-than-normal winter break. He would have to move out of his dorm.

“College was a way for me to build my own life away from home,” he said. “But when that first winter break came along, I had very limited options for housing. I managed to find a place to stay in Residence Hall 1, but the scholarship didn’t cover it.

“I used all my earnings from working as a student assistant in the Division of Diversity and Community Engagement.”

Not only this, but Dabel was also surprised to find that his unlimited meal plan ended when the semester ended. He was referred to the campus food pantry, Grove Grocery.

“It is a great resource, but it’s all canned food that students can’t really cook in the residence halls,” he said. “Walking past people eating at Rebel Market was also very hard. I thought, ‘Why can’t I eat there too?’”

This motivated him to seek out ways to make a difference for students who experience financial and food insecurity. His first step was to run for an Associated Student Body Senate seat.

The road to ASB Senate didn’t come without challenges. Dabel felt like the odds were stacked against him due to not having a fraternity’s backing, but he ran an arduous campaign.

When the results came out, he was devastated to discover that he had lost by one vote.

“I couldn’t believe it; it felt like a mistake,” he said. “I spent the whole night reviewing the results and found that there was one in-person vote. Everyone was supposed to vote virtually because of COVID.

“After alerting the ASB of this, I was able to serve as a senator my sophomore year.” 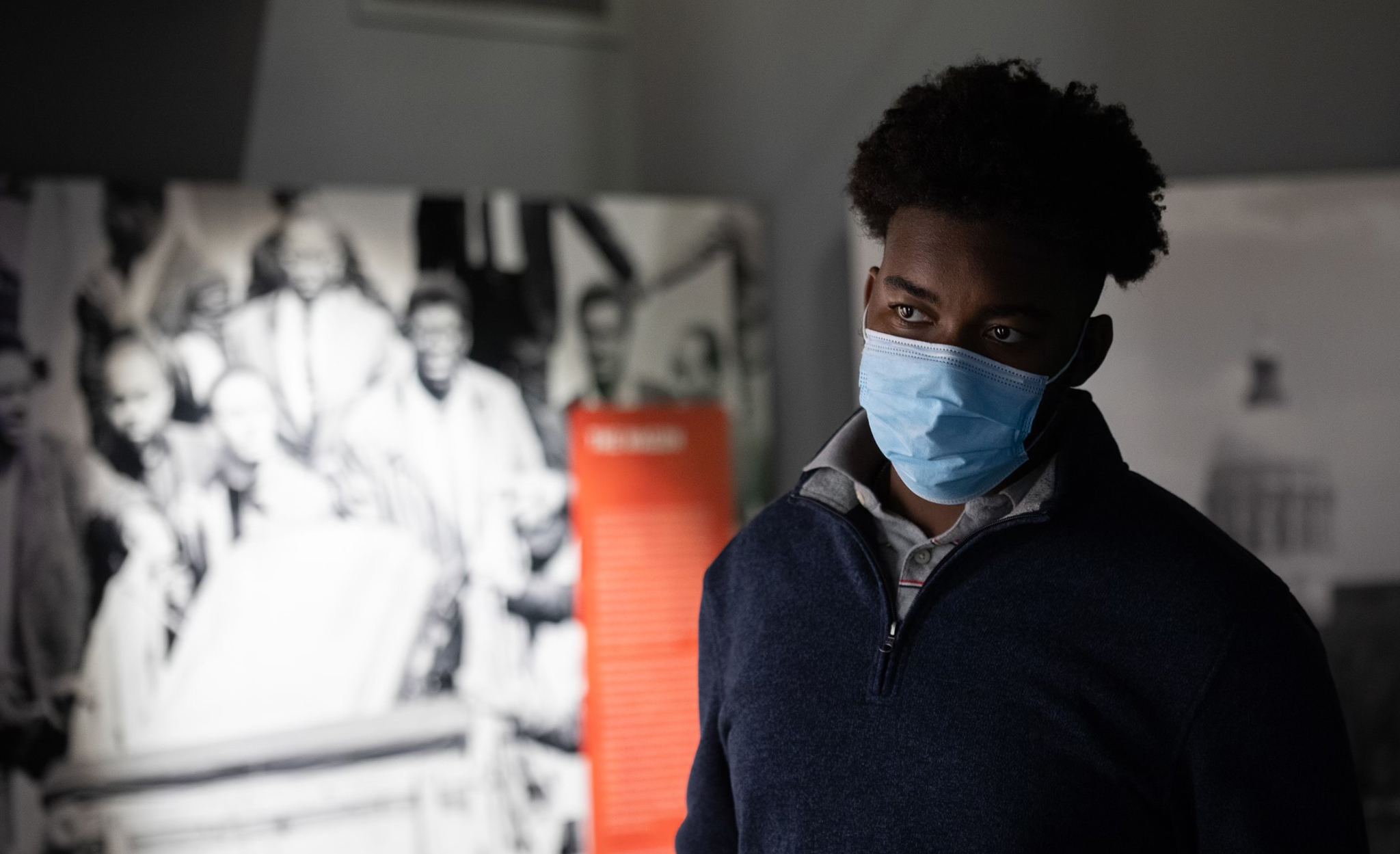 Dabel continued to pursue opportunities to effect change and was awarded a fellowship from the Every Learner Everywhere Network. The program aims to use technology to innovate teaching and learning to improve outcomes for Black, Latino and indigenous students, poverty-affected students and first-generation students across the nation.

Through the fellowship, Dabel was able to partner with the National Center for Research in Advanced Information and Digital Technologies, also known as Digital Promise.

He then applied to work as a Congressional Hunger Center intern and was accepted. The role placed him in Jackson during the summer of his freshman year, where he lived at Millsaps College and assisted the Good Samaritan Center.

“We would do case management and help people with food and clothes,” Dabel said. “It helped me to really understand the primary issues with food insecurity. Every Friday afternoon, we would meet on Zoom with other interns all over the U.S. We would talk with different companies and with senators who were working on hunger issues.

“It was a great internship and gave me insight on how to make changes on campus.”

The summer of his sophomore year, Jonathan interned for Breakthrough Collaborative. The internship allowed him to teach an entrepreneurship course in Miami to rising high school students, many of whom were from under-resourced communities. 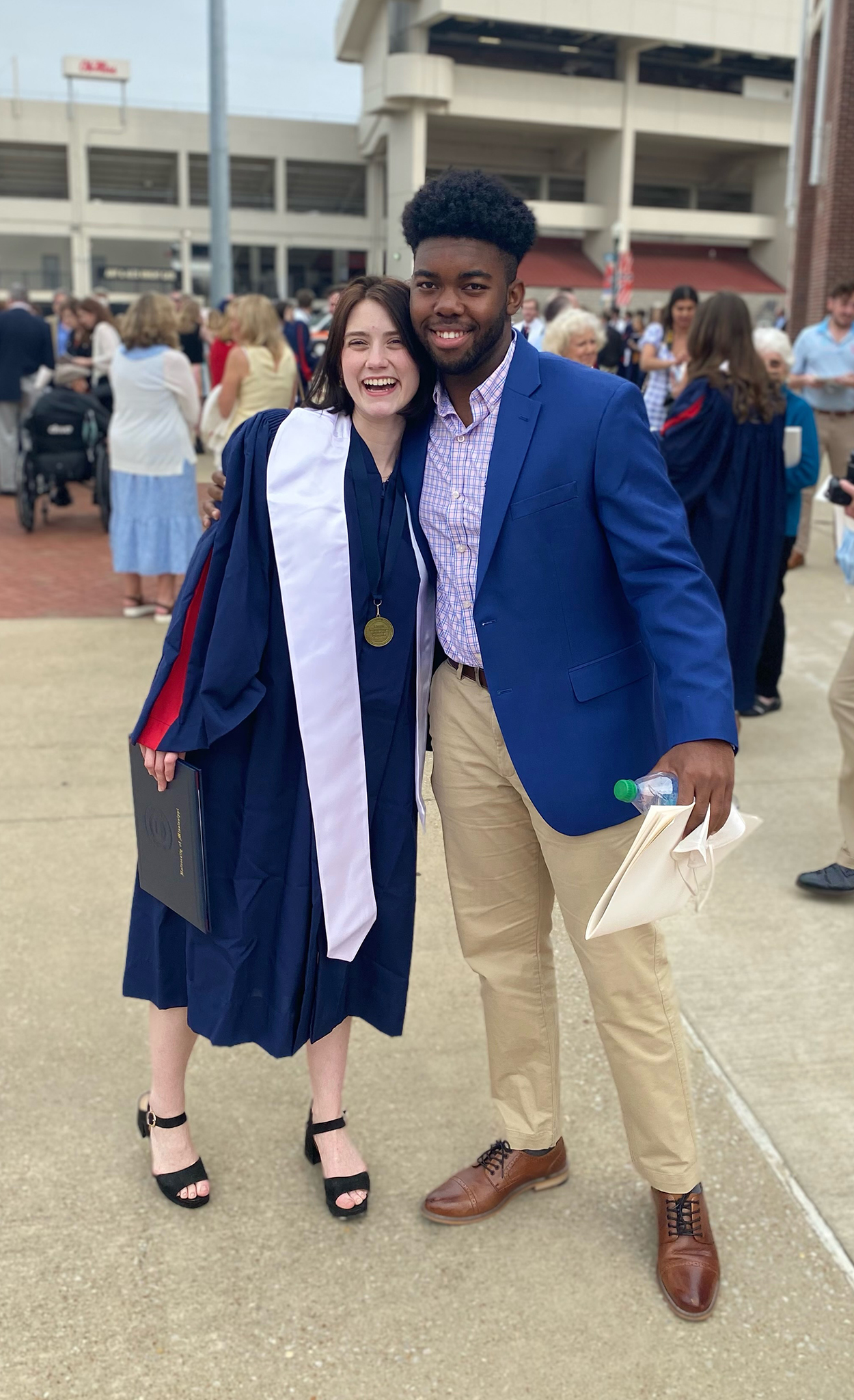 The program also paid for him to stay with fellow interns at the University of Miami. One of the highlights of the program, Dabel said, was teaching in the lecture halls there.

Ainsley Ash, who received a public policy leadership degree from Ole Miss in 2021, befriended Dabel while she was a senior. She realized that they both were passionate about “creating opportunities for young people and residents of the Deep South.”

“Jonathan has a natural intellectual curiosity about the world and a desire to understand the systems that shape it,” she said. “He combines this hunger for knowledge with profound kindness and selflessness that makes him a very powerful agent for change.”

Ash was there by Dabel’s side while he searched for housing and reliable transportation, as well as while he navigated the university’s complex social structure.

“I am most impressed by him because he does not succumb to challenges; rather, he uses them to fuel his resolve to confront them head on,” she said. “He has worked with students, community leaders and administrators to identify potential solutions to problems such as these.

“I am very proud of him and his refusal to accept the status quo.”

Dabel has acquired many other accolades while at UM. He was named Freshman Leader of the Year. He was given an Outstanding Achievement Award from the Center for Inclusion and Cross Cultural Engagement’s Men of Excellence organization. 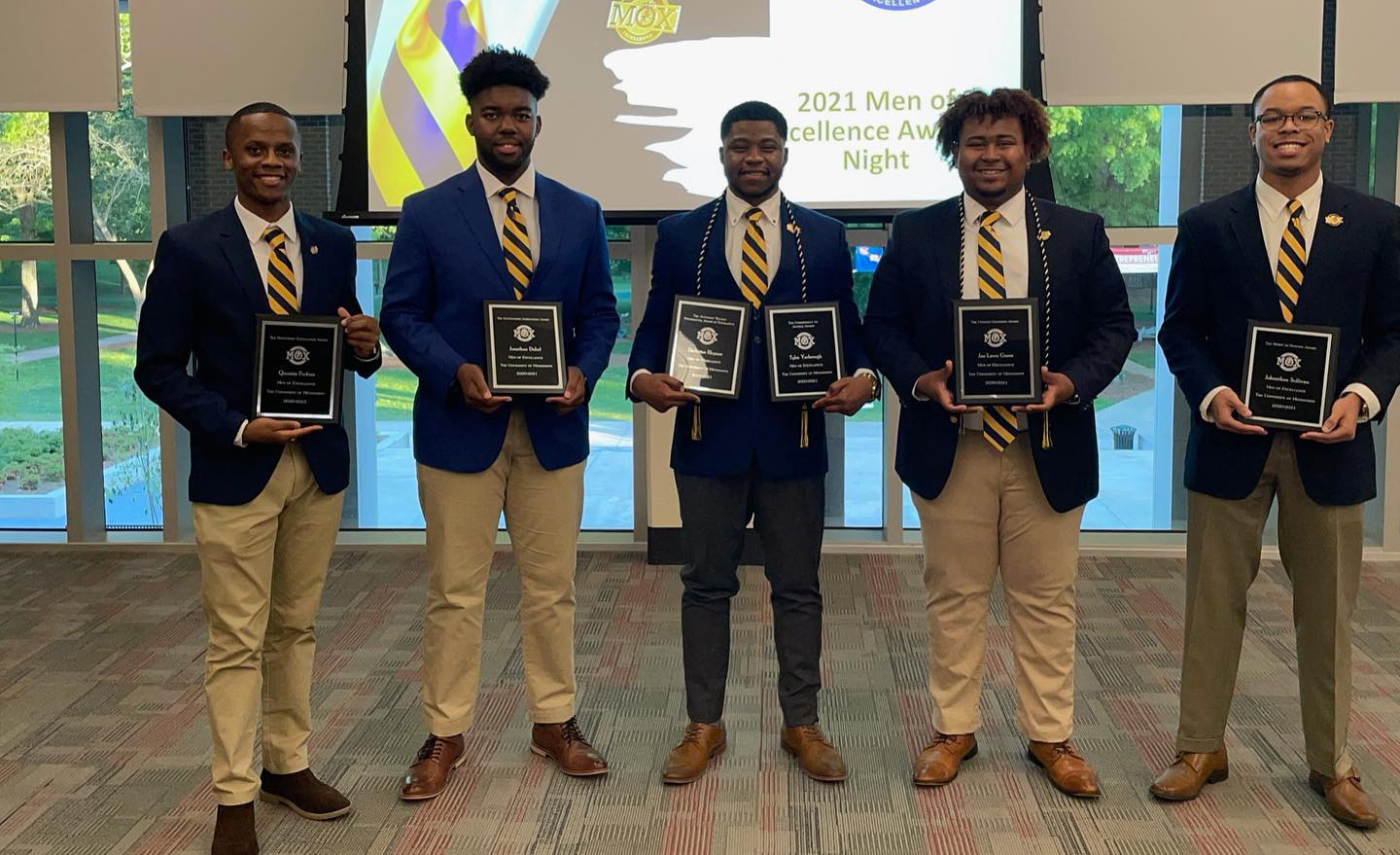 When he joined the Lott Leadership Institute, he was introduced to Melissa Jones, the institute’s associate director.

“At the Lott Institute, we look for talented students that want to invest in the future of our state, nation and world as leaders,” Jones said. “Jonathan is one of these talented students. He consistently looks for ways to not only apply what he has learned in the classroom, but also personally invest in such a way that he leaves the situation and those around him better for his interaction with them.

“I look forward to following Jonathan’s journey in the future, because I know he is going to make significant impacts on the world around him through his dedication, hard work and willingness to invest in others.”

A first-generation student, Dabel credits his mother for ensuring that he took advantage of the opportunities afforded to him as a U.S. citizen. He said he was thrilled that he saved enough from his job with the housing department to fly his mother to Miami to meet him recently.

“She is the reason I’m here today,” he said. “There were so many points where I could have easily given up, but she told me that it was all going to work out. I am so thankful for her.”

Dabel is thankful that his time at the university allows him to persist in his quest to solve education inequity and economic inequality. After graduation, he plans to attend law school.

“I really want to help people,” he said. “It was easy for me to move forward because I was a U.S. citizen. Many people I know are stuck in Haiti. I am compelled to use my degree to do something about this.

“Education should be equitable, and it can be the key to changing the entire economic status of some families. I know that I can make a difference, and I feel it’s my duty to do so.”