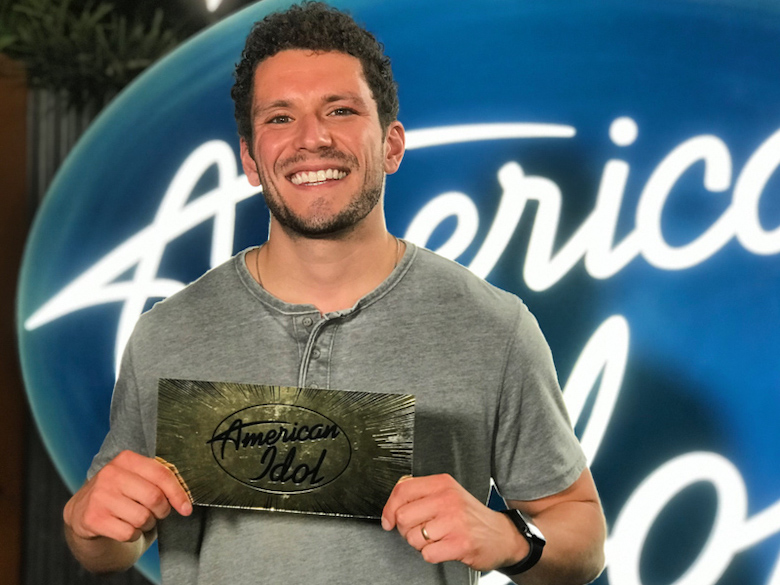 Conner Ball nabs the iconic Golden Ticket after an audition last fall on “American Idol.” He had pinned his hopes on “Falling,” the Harry Styles song, that is.

March 19, 2021 By Gary Pettus for the University of Mississippi Medical Center

As Dr. Lyssa Weatherly recalls, when Conner Ball (BA biological sciences 18) was a first-year medical student, he recorded a song that made the rounds among faculty and staff at the University of Mississippi Medical Center.

“It was so good, people kept passing it around,” said Weatherly, assistant professor of geriatrics and gerontology and assistant dean of student affairs for the School of Medicine.

“Everyone said, ‘You need to listen to this kid sing.’”

And, in case anyone needs a second, third or fourth opinion: Katy Perry, Lionel Richie and Luke Bryan think so, too.

Those three “American Idol” celebrity judges recently ruled that Ball, now in his second year of medical school, was good enough to seize the Golden Ticket – the coveted passport to the Hollywood round of ABC TV’s popular talent showcase.

Along with that prize is the possibility that Ball’s filmed segments with Perry, Richie and Bryan will air on “American Idol” this Sunday.

It’s a noteworthy endorsement for the singer-songwriter who, until relatively recently, didn’t realize he could carry a tune, much less lift it high above his head. “I didn’t know I could sing at all until I was in the 10th grade,” Ball said.

Validation via “American Idol” presents him with an exquisite dilemma, though, as he ponders how to navigate the separate paths of his two loves: medicine and music.

“I definitely want to finish medical school and be a physician; I’ve always been passionate about that,” said Ball, who grew up mostly in Madison, where he lives now with his wife Carrie Hancock Ball, a physical therapy student at UMMC who graduates in May. 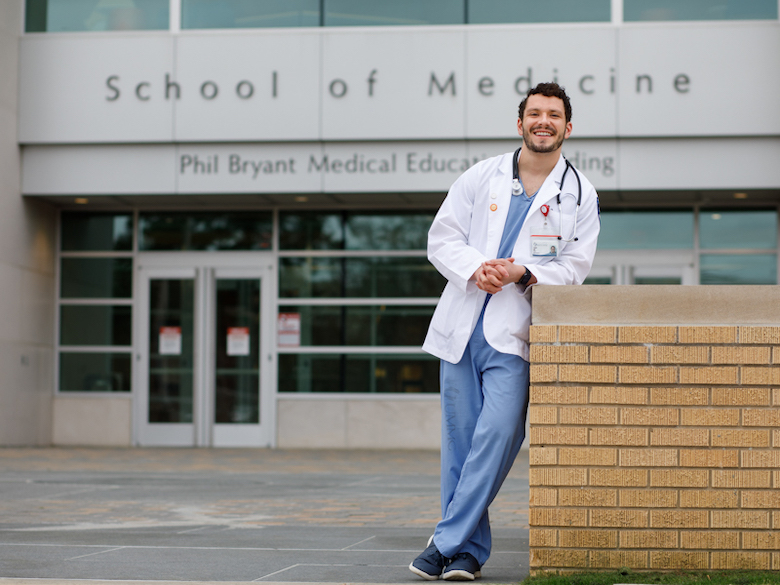 The M2 will continue to record and study, and figure out how to accommodate his two passions: medicine and music.

“I want to keep doing music, too. This year, a lot of doors have opened.”

Ball was about 15 when he crossed the first threshold of his singing career. Although he had been strumming the guitar since he was 10 – “I played in my room hours at a time,” he said – he didn’t set his voice free until he joined his high school’s show choir at Jackson Prep.

“They needed more guys in the choir,” Ball said. “And my friends asked me to join. Then the director, Dianne Holbert, told me I had a good voice. She had such a great impact on me; that encouraged me to keep singing.”

So he did, with various bands, church groups and more. Among the inspirations for his brand of alternative music are John Mayer and Ed Sheeran. And his wife Carrie. It was Carrie who helped him birth his foray into recording – on his birthday.

“We were married right before I entered medical school,” Conner Ball said. “Later, Carrie bought me a session at Blue Sky Studios in Jackson for my birthday. So I wrote a song and recorded it, and then put it on Spotify  and YouTube.”

He just needed “a little nudge,” Carrie Ball said. “I don’t think he saw how talented he is. He didn’t believe in himself as much as others believed in him. So I bought him that studio session and told him to give it a try.

“Having your wife say you’re talented is one thing, but the guys at the studio also said they were really impressed with him. They said, ‘We never know what’s going to come through the door.’ Lucky for them, it was Conner.”

Several recording sessions later, Conner Ball’s discography on Spotify has blossomed into a quartet of Blue Sky productions: “I Remember,” “Hold on for Me,” “In the Air,” and “Careful.”

Joseph Cook, a third-year medical student and Ball’s friend since they were students at the University of Mississippi, creates the distinctive art work for the recordings Carrie Ball describes as “chill and relaxed,” which is probably a good thing, since she’s pretty sure her husband’s lyrics are about her.

“I think most of them are,” she said.

Obviously, Carrie Ball’s “little nudge” had worked. After that first recording session, Conner Ball “started writing a ton,” he said. “I kept calling the studio to do more projects.” Casey Combest, Blue Sky’s founder, obliged, as did the team of studio musicians who worked with him.

Heartened by this response, Ball considered taking on “American Idol” after his dad, Scott Ball, and his mother-in-law, Rita Hancock, both sent him the link to try out. Realizing that medical school time waits for no one, he sought the blessing of a dean first. That dean was Weatherly.

She remembered well the recording Ball had made about a year earlier. It was his submission for a creative arts project about patient care, an assignment for his Introduction to the Medical Profession course. “”Empathy” was his theme, and it struck a chord with Weatherly.

“He is so incredible,” she said. “But when we met, he told me he never expected to be chosen for an audition on ‘American Idol.’ He wanted to do it, though, if I thought it was a good idea; otherwise he wouldn’t try.

“I said, ‘Are you crazy? We will move mountains to make this happen for you.’ And, no matter how far he got, he never presumed he was entitled to do this; he would always ask if he could have time off, which was really refreshing.

“The biggest shout-out goes to the course directors of the M2 class. Without hesitation, every single one of them said they would do whatever they could to help him; many volunteered to come up here during the Christmas holidays to give him makeup tests.

“Without their support, it wouldn’t have been possible for him to do this. And they did it with such grace.”

Through grace, and his own gumption, Ball began his “American Idol” experience in September, auditioning online from his house. Otherwise, without that pandemic-imposed arrangement, he would have had no time to travel for a series of out-of-town tryouts, he said.

“I logged on to Zoom, and each contestant was put in breakout rooms with a producer to perform a song for them,” Ball said. He withstood this first trial.

“In October, they flew me and Carrie out to Los Angeles for another audition and to film my story,” he said. That’s when he first met the celebrity judges. When he wasn’t auditioning, “I quarantined in the hotel room and studied,” he said.

When he was auditioning, Carrie Ball sat on the other side of the closed door. “I was praying and praying: ‘Please let him get the Golden Ticket,’” she said. “I thought he would go far, but for some reason I started getting really nervous. I thought, ‘Will they run out of Golden Tickets?’”

“First, the judges asked me a bunch of questions about medical school,” Conner Ball said. “They were awesome.” For them, he sang Harry Styles’ version of “Falling” – an ironic title, considering what happened next.

“They gave me a critique and told me I had won the Golden Ticket,” Ball said. “So I grabbed it off the wall; because of COVID, they couldn’t hand it to me.”

He had his ticket for the first round of Hollywood Week. In December, he traveled again to Los Angeles for another filming session and a performance before the trio of appropriately-distanced celebrities.

As of press time, Ball was waiting to find out if his interview footage and performance from December will air on the upcoming episode or, possibly, the following week.

“It was stressful for a while, trying to make up so much class time,” Ball said. “Dr. Weatherly was amazing; she figured out what I needed to do to keep up in my classes.”

Speaking with her, he wondered aloud what a boost to his musical career might mean for his medical career. “I told him if it does get that far, then he figures it out along the way,” Weatherly said. “I also told him it’s an opportunity he cannot pass on. So I’m glad he didn’t.

“I’m just so proud of him. He represents us well, and puts a good face on UMMC and Mississippi.”

For her part, Carrie Ball has told him that, whatever he chooses to do, “we’ll try to make it work,” she said. “I want him to be happy. Right now, I think he’s happy where he is.”

But Conner Ball is not happy to record only 10 songs – his total, so far. More are on the way, including an album, and, separately, an EP of Christian songs “based on my faith,” he said.

“Finding time for music – it’s day-by-day,” Ball said. “Honestly, though, it’s been the best way to find a release from studying. At the end of the day, I pick up my guitar and write; that’s been incredible.

“I want to keep recording and writing when I can, and performing when I have free time. Maybe try out for another show. None of that may happen, though.

“But I’ll keep living life to the fullest and try to do both.”