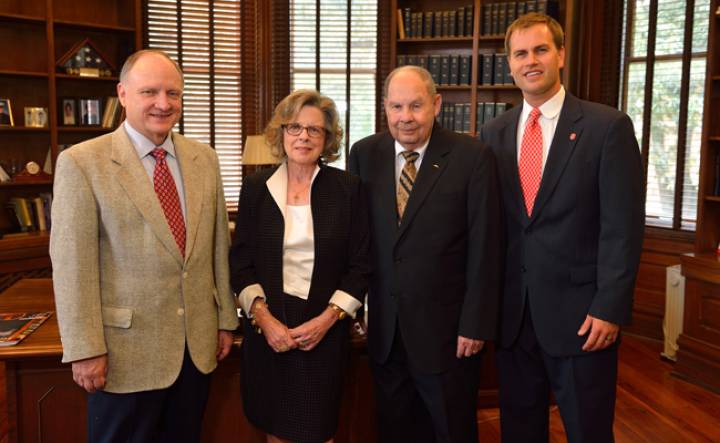 Glenn Hopkins, dean of the UM College of Liberal Arts, from left, visits with Sara and Elvis Champion, donors from Water Valley, Miss., and Denson Hollis, senior development officer for liberal arts. The Champions have funded a scholarship endowment in mathematics to pay tribute to her father, the late Bill Trusty.

William T. “Bill” Trusty of Water Valley, Miss., was a well-known, respected leader who managed three businesses and served the community he loved through the local school board and an array of other business and civic organizations. His vibrant legacy now will be expanded through a new scholarship fund in his name at the University of Mississippi.

Sara and Elvis Champion, also of Water Valley, have established the William T. Trusty Mathematics Scholarship Endowment to pay tribute to her father’s life through a $50,000 gift. Trusty earned a Bachelor of Commerce degree in 1933 from UM, and Sara Trusty Champion earned an undergraduate degree in education and a master’s degree in mathematics.

“Daddy was very business oriented. From the time he was big enough to stand on a crate and see over the counter, he was involved in the family businesses. He really enjoyed business and interacting with customers; he had a very outgoing personality,” Champion said.

“Daddy also loved Ole Miss and wanted to give back through scholarships. He had made inquiries into the process of starting a scholarship. My husband and I are pleased we can provide this gift for something we know was important to him. We chose to direct the support for math majors because we know there is always a need for strong math teachers,” said Champion, who taught math and gifted education on the junior high and high school level for 28 years in Oxford, Water Valley, Oakland and Sardis.

Iwo Labuda, chair of UM’s Department of Mathematics expressed appreciation to the Champions and explained the impact of scholarships.

“In these times when education is so costly, scholarships take on special value. Mathematical education is crucial and yet remains underrated. We are very pleased that the family of Bill Trusty in their generosity made it possible for more students to pursue their dreams,” Labuda said.

Before Trusty evolved into the longtime successful manager of several businesses – the International Harvester Company dealership in Water Valley for more than 45 years, Trusty Hardware for 25 years and Hotel Trusty for 10 years – he was an UM student.

“He had a fine time at Ole Miss,” Sara Champion said, smiling. “Daddy completed his degree in three and a half years, which means he worked hard. However, he also played hard, enjoying school dances and his membership in the Pi Kappa Alpha fraternity. He roomed next to Dr. (T.A.) Bickerstaff, who became an Ole Miss mathematics professor.”

Elvis Champion first met his future father-in-law through the Trusty family businesses. “He was the best friend I ever had,” he said, reflecting on their relationship. “My family would buy equipment from Mr. Trusty so I knew him before I met Sara. A mutual friend introduced Sara and me, and we dated three years before I asked him for her hand in marriage. It was always clear to everyone how much Mr. Trusty loved Ole Miss. He kept up with the Rebel football team and attended games as long as he could.”

College of Liberal Arts Dean Glenn Hopkins praised the Champions for seeing that Trusty’s longtime relationship with the university is recognized in perpetuity through an endowment.

“We deeply appreciate Sara and Elvis Champion completing Mr. Trusty’s dream of supporting scholarships by creating this endowment in his name. We are inspired that Mr. Trusty valued the University of Mississippi to the extent that he wanted to help future generations of students pursue their college degrees here. It’s obvious that the Champions also believe in the power of education, and we thank them for their generosity and for their thoughtful decision to support mathematics majors.”

Trusty lived a long life, passing away in 2011 at the age of 99; his wife, Rachel Burham Trusty, died in 1999. At the time of his death, Trusty was the oldest member of First Baptist Church of Water Valley and had been a Mason for 75 years. The business professional committed his time to serve two terms on the local school board and was a member of the Bank of Water Valley Board of Directors for 40 years and the vice president for 25 of those years. Trusty provided leadership as the president of the Junior Chamber of Commerce, Chamber of Commerce, Rotary Club and the Baptist Men’s Bible Class of 110 Members, as well as the treasurer of the Yalobusha Country Club.

Also driving the Champion’s decision to provide private support for scholarships are their own special associations with Ole Miss. In between some of her teaching engagements, Sara worked as a computer programmer with student records and admissions. Elvis, a pilot with the University-Oxford Airport, was involved with the ROTC flight training program and flew UM chancellors and coaches to official duties around the state and region.

The Trusty Scholarship is designated for Mississippi students, and recipients will be chosen by the UM Department of Mathematics Scholarship Selection Committee. Those granted the academic award have to maintain a minimum 3.0 grade-point average to continue receiving the assistance.

Individuals and organizations can make gifts to the William T. Trusty Mathematics Scholarship Endowment by mailing a check with the fund noted in the memo line to the University of Mississippi Foundation, P.O. Box 249, University, Miss. 38677; visiting www.umfoundation.com/makeagift; or contacting Denson Hollis, senior development officer for the College of Liberal Arts, at 662-915-5092 or dhollis@olemiss.edu.