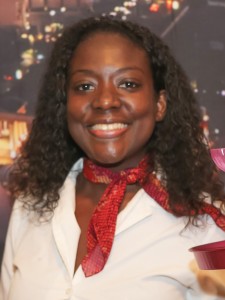 Gifts to a new University of Mississippi fund will honor the life of alumna Pamela E. Hamilton while also establishing a lecture series and scholarship in her name.

A successful journalist with a passion for using words and media to change the world around her, Hamilton died Aug. 10, 2015, due to complications associated with lupus, an autoimmune disease she had battled since February 2006.

Friends and family are requesting support for the fund via an online campaign launched by the UM Foundation on Tuesday (Feb. 2), when Hamilton would have celebrated her 36th birthday.

The Pamela E. Hamilton Memorial Fund will help continue Hamilton’s legacy at UM by supporting an annual lecture series on social justice and media, as well as an annual academic award to a student in the Meek School of Journalism and New Media. The inaugural Pamela E. Hamilton Memorial Lecture will be held April 1 during the Mississippi Scholastic Press Association Spring Convention on the Oxford campus.

“Whether you knew Pam as a friend, classmate or loving family member, we encourage you to support this fund as a memorial in her name,” said Hamilton’s sister, Melissa Hamilton of Atlanta. “Much of Pam’s success was possible due to scholarships and the love and support of her family and community. She would be proud to know that other students will receive similar support as a result of the impact she made.”

Hamilton, who graduated from the University of Mississippi in 2002 with degrees in journalism and English, began her career as a reporter for the Lion’s Roar newspaper staff at Raleigh (Miss.) High School, where she was a member of the Class of 1998. A dedicated scholar, she also was a National Achievement Finalist, a varsity cheerleader captain, dance captain and class president. She won first place in the state History Day competition and first place in the NAACP Creative Writing Contest. She was elected homecoming queen, Miss Raleigh High School and Most Likely to Succeed.

“To the class of ’98, Pam was our president, a prize student to her teachers and a friend to everyone who knew her,” said Hamilton’s cousin and Raleigh High classmate, Perez Hamilton. “She loved to see everyone succeed and was our biggest cheerleader. Watching Pam break barriers and strive to accomplish goals inspired us all to do the same. Pam’s impact is continuously felt in the Raleigh-Smith County community.”

Hamilton continued to pursue her passion for journalism at UM, where she began writing for The Daily Mississippian student newspaper her freshman year and served as editor in 2000-2001. During her tenure, she opened the paper’s ranks to student writers from across campus while encouraging the free exchange and reporting of ideas from all groups.

She used her position as editor to bring people together and promote social justice. While an Ole Miss student, she also completed an editorial board internship at The New York Times, primarily covering higher education issues.

“Pam was easily one of the finest journalists and editors at The Daily Mississippian,” said Ralph Braseth, Hamilton’s UM faculty adviser and now a Loyola University professor. “She was a leader for sure, and anyone who worked with her knew that.

“But most impressive, year after year, I watched how much she cared for others. When Pam Hamilton spoke with you, she zeroed in like no person I know; she made you feel like you were the only person in the world. That’s one reason why she was such a remarkable journalist. … I miss Pam and I always will.”

At UM, Hamilton was a member of the Sally McDonnell Barksdale Honors College, the Chancellor’s Leadership Class, Mortar Board, Delta Sigma Theta sorority, Who’s Who Among Students in American Universities and Colleges and the National Association of Black Journalists. She was inducted into the Ole Miss Hall of Fame in 2002, one of the highest honors awarded to graduating seniors.

After college, Hamilton worked as a reporter for the Associated Press, covering education in South Carolina. In 2007, she earned a master’s degree in English from the University of North Carolina at Chapel Hill. Her stellar career continued as she accepted various positions at The New York Times, the Associated Press, CNN and Thomson Reuters news service.

In Raleigh, Hamilton was a member of Hopewell Missionary Baptist Church, and in Atlanta she actively served as a data entry volunteer with the Assimilation Ministry at Elizabeth Baptist Church.

Contributions to the Pamela E. Hamilton Memorial Fund can be made through the campaign website at https://ignite.olemiss.edu/PamsImpact. Additionally, gifts can be made by mailing a check with the fund noted in the memo line to the University of Mississippi Foundation, P.O. Box 249, University, MS 38677-0249.