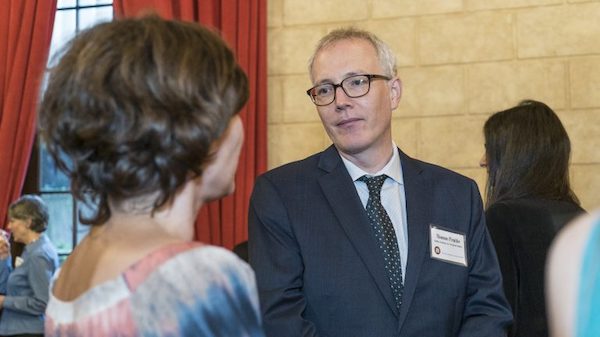 UM music professor Thomas Peattie attends an event at the Italian Academy for Advanced Studies in America during his fellowship there last fall. Submitted photo

Thomas Peattie, an assistant professor of music at the University of Mississippi, has returned to campus after completing a prestigious fellowship at Columbia University during the fall semester.

Peattie spent the semester at the Italian Academy for Advanced Studies in America, part of the university in New York City, which takes scholars from around the world in a variety of fields. The academy’s goal is to “support advanced research in areas relating to Italian culture, science and society,” according to its website.

Peattie, a music historian, was specifically interested in the work of 20th-century Italian composer Luciano Berio, about whom he is writing a book.

“I have always been fascinated by Berio’s practice of taking an existing music work and using it as a point of departure for the creation of an entirely new composition,” Peattie said. “What I continue to find so compelling about this practice is the extent to which these newly fashioned pieces offer a kind of musical commentary on the unrealized potential of the original material.”

During his research, Peattie paid particular attention to Berio’s practice of transcribing the works of other composers, including Johannes Brahms and Gustav Mahler, which has been largely neglected by scholars, he said. The way in which Berio listened to the music of his predecessors may illuminate more about Berio’s own works, Peattie said.

“This ultimately led me to the conclusion that although these transcriptions rely on an intimate knowledge of an original ‘text,’ Berio’s relationship to these texts is also shaped by an entirely different kind of knowledge, one shaped by the lingering sonic traces of the performed work as remembered and misremembered over the course of a lifetime of listening,” he said.

“The rich body of vocal, orchestral and chamber music that he created between the mid-1950s and his death in 2003 has played a crucial role in securing his reputation as the most important Italian composer of his generation,” he said. “His works continue to receive frequent performances and have also attracted considerable attention from scholars of 20th-century music.”

Berio’s music has often been described as complex, but this has not prevented it from being accepted or understood even among the most contemporary-averse audiences. This is because Berio’s works “are always informed by conventional categories of harmony and gesture even if they also draw extensively on the advanced musical techniques associated with the postwar avant-garde,” Peattie said.

Outside the academy, Peattie was involved with Columbia’s Department of Music by serving as a guest lecturer at a seminar and giving a talk at the department’s musicology colloquium series. He also was a co-curator of an exhibition at the Italian Academy covering Berio’s relationship with 17th-century Italian composer Claudio Monteverdi; Peattie helped organize a two-day symposium and a concert.

“This experience has already made me a better scholar,” Peattie said after returning to his Ole Miss classroom. “It has given me new ways of thinking about the way in which research is conducted.”

Robert Riggs, chair of the Department of Music, expressed the value of an opportunity to be a guest at another university in addition to being able to spend time free from teaching and service obligations.

“This highly competitive fellowship enabled Dr. Peattie to make significant progress on his new book, and his selection for this honor certainly reflects well on the high quality of research being conducted in our music department,” Riggs said. “Moreover, I anticipate that his future teaching and research will be invigorated by his having been immersed in the vibrant musical culture of New York City.”