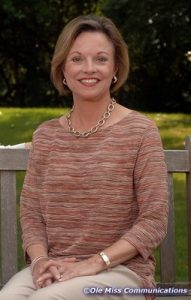 Mrs. Kathryn Black has been a dedicated mother, community leader, and UM supporter, including founding board member of Ole Miss Women’s Council for Philanthropy.

Kathryn Brewer Black was born in Greenwood, Mississippi, and graduated with honors from the University of Mississippi in 1962 with a BA in English and a double minor in history and Spanish. Her academic achievements were recognized by her induction in to Phi Kappa Phi, the nation’s oldest, largest, and most selective honor society.

Mrs. Black invested her adult life as a mother and homemaker, and considers her greatest legacy to be her family. She has one daughter, Liza Upshaw (Steve), 2 grandchildren and 1 great grandchild.  She has generously supported UM academics and athletics for many years.  She paid tribute to her parents by establishing the Kathryn H. and David J. Brewer Council Scholarship through the Ole Miss Women’s Council for Philanthropy. She enjoys serving as a board member for the Tau Chapter of the Chi Omega house corporation in Oxford.

As a longtime resident of Greenwood, Mrs. Black was president of the Greenwood Junior Auxiliary, Greenwood Park Commission board, and member of the First Presbyterian Church, where she worked on a number of service-related projects. Since moving to Oxford, she has become actively involved at UM as co-chair of the Chancellor’s Trust-Pacesetter Committee of the University’s Commitment to Excellence Campaign, and a Chancellor’s Trust member. She is pleased to be a founding board member for the Ole Miss Women’s Council, and is an 1848 Society member.  Kathryn believes “to be a productive member of society, you have to get involved.”