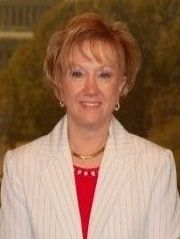 Mrs. Gail Russell is a Partner with the law firm Goldberg Simpson where her main areas of practice are bankruptcy law and creditors’ rights. She is both politically active with state and national Republican Party and is active in many organizations in the Louisville community.

A native of Murray, Kentucky, Gail Russell received her BA in political science from the University of Mississippi in 1976. She was an officer in Mortar Board, national senior women’s honor society and Pi Sigma Alpha, political science honor society. She returned home and earned her Juris Doctor degree in 1979 from University of Kentucky College of Law. Now a partner with the Louisville law firm Goldberg Simpson, her main areas of practice are bankruptcy law and creditors’ rights.

“Ole Miss provided me a tremendous educational opportunity, and I left campus prepared to compete at the next level. I owe a debt to this university for giving me a wonderful foundation upon which to build a legal career.”

Gail and her husband, Ken Potish, a retired banker, reside in Louisville, KY.