Four years ago, the doctoral program in the Department of Modern Languages began with five full-time students. Today, enrollment has multiplied 11 times the original number and counting.

The degree is designed to educate professionals who can provide second language training for firms that conduct business globally and need workers who can speak Spanish and other languages. The program also trains future modern language administrators for universities and other institutions.

While the numbers have not yet been finalized, there are currently 55 active students in the program. An official expects there to be 60+ this fall.

“Our graduate program has quickly become internationally known,” said Daniel O’Sullivan, chair and professor of modern languages. “Some of this has come down to recruiting—either actively through trips by staff/faculty prepandemic or passive via our website. A lot also has to do with word of mouth and the good things our students say about the program to their teachers overseas.”

The degree program has two tracks. One is in applied linguistics, which is geared toward understanding empirical data about languages, the evolution of languages, and various dialects in the media and across the nation, among other aspects.

The second track is in Spanish. It focuses on meeting the growing demand for professionals and academics who understand the language and culture of Spanish-speaking communities.

“In a rather short period of time, it has established itself nationally and internationally as a program that successfully trains and prepares graduate students for academic careers in language teaching, pedagogy, and second language acquisition with a strong underpinning of both applied and theoretical linguistics and hands-on experience in the classroom,” said Donald Dyer, associate dean for faculty and academic affairs and distinguished professor of modern languages. “The College is extremely proud of the program’s success, its growth, and its prospects for the future.” 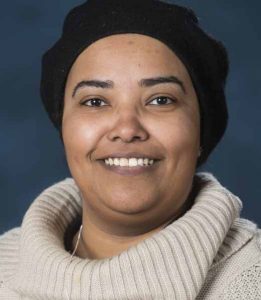 Asmaa Taha and Lin Zhu were among the inaugural students in the program. Taha, a class marshal at UM’s 2021 commencement exercise, finished her PhD in December while working full-time in UM’s Arabic Language Flagship Program. Zhu is now on the faculty at Tulane University.

Several students are actively promoting the program. A website they composed and maintained shows all the countries from which UM students hail.
“We are training students to be leaders in their fields upon receiving their PhDs and then to be transformative in education, government, or industry through their linguistic and analytic skills,” O’Sullivan said. “We want them to show initiative, and so we were delighted to learn that several of them banded together to form the Graduate Student Colloquium in Applied Linguistics and TESOL, where they organize a colloquium once a semester in which one student gives a professional-type presentation to students and faculty.”

Most recently, the students have established an online journal, entitled the University of Mississippi Working Papers in Applied Linguistics.

The degree prepares students to be leaders locally, regionally, nationally, and internationally, said Felice Coles, program graduate coordinator and a professor of modern languages. “The emphases in applied linguistics and Spanish gives students a greater understanding of how to learn, teach, and work with speakers of many languages around the world. Using their valuable and marketable skills, our PhD graduates are happily finding jobs in education, government, and industry.”

>> For more information about the doctoral program in the Department of Modern Languages, visit the PhD program in Second Language Studies website.